What to Make of the Kooky Action in Gold
By Steve Sjuggerud
Thursday, March 19, 2020

"What's the deal with gold right now?" you might be asking.

"I thought it was a crisis hedge, Steve. But the metal has been falling."

If you own any gold – or were thinking about buying some – these are valid concerns. Lots of folks think of gold as a hedge against uncertainty. And that's usually the case.

Why, then, is gold down double digits in less than two weeks?

Gold isn't broken. Don't worry about that. In fact, if we look at history, this action makes a lot of sense.

This might surprise you... But when crisis hits, history says you shouldn't expect a big pop in gold right away.

This goes against the conventional wisdom. Most folks believe gold is a crisis hedge that immediately goes up when stocks crash. But it isn't always that simple.

Yes, gold is a crisis hedge. And it does its job. But the way it gets there isn't what most would expect.

The Great Recession of 2008 is the perfect example. Take a look at how this major gold fund performed compared with U.S. stocks... 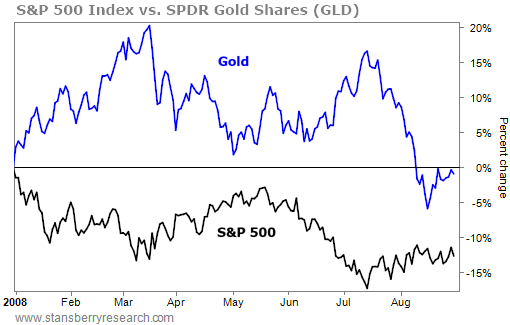 This isn't what you'd expect. As the housing crisis unfolded, gold chopped sideways, largely falling alongside the S&P 500. It looked like investors had no safe haven... But that wasn't the case.

In reality, the issue was patience.

Investors who got into gold as the crisis unfolded did incredibly well... eventually. It just took a little time. But just about any investment in gold – whether during or after the crisis began – led to outperformance over stocks. The chart below shows it...

Look at how gold did compared with stocks if you'd bought in early 2008 as the crisis hit... 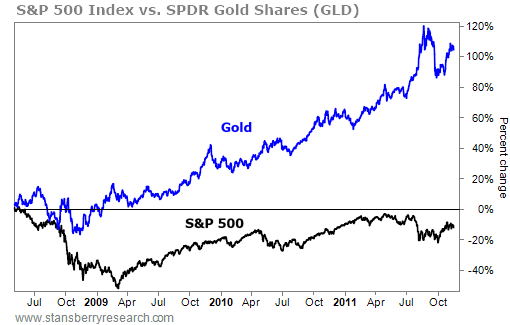 Despite the initial chop, gold massively outperformed stocks if you'd bought as the crisis began. It's more than that, though...

In 2009, even as the market recovered, gold was the better bet.

That may seem crazy. But it was true for buyers getting in at the beginning of 2011, too. Even a recent crisis tends to mean big opportunity in gold.

This should get your attention. For the first three years of the recovery, gold was the outperformer. Not stocks.

We're starting to see this play out again now...

The news of the coronavirus broke in January. And you might have expected to see a big jump in gold prices. After all, a new SARS-like infection is darn scary.

The metal did jump at first, before stocks started falling. But it has fallen alongside stocks over the last couple of weeks.

This is similar to what we saw in 2008. Gold tracked stocks as the crisis began to unfold... Then, over the coming years, it dramatically outperformed thanks to low rates and high fears.

We're likely in for a bit of chop before gold dramatically outperforms. That's exactly what happened last time. But the important thing for precious metals investors is that you don't need perfect timing.

In times of crisis, you shouldn't worry about timing the gold market exactly right. You just need to take advantage of the near-certain rally over the long term.

So yes... if you only glance at the gold market, it seems odd right now. But if you dig deeper, you'll see that things are playing out exactly as you'd expect.

History says that buying gold today is a recipe for long-term outperformance. All you'll need is a little patience.

A market sell-off is always tough to navigate. But when the trend turns around, you can find opportunities in excellent income securities at bargain-basement prices. Read more here: A Lesson in Income Investing at the Grocery Store.

Many businesses are digging themselves deep into no-win situations by taking on more debt than they could possibly handle. And if you know how to pick out these failing companies, it's possible to profit from their demise... Get the full story here: Making Triple-Digit Gains on the Collapse of the Bullies.

The number of cases keeps climbing. The White House is now saying not to gather in groups of more than 10… And public places like bars, theaters, and restaurants have been left empty throughout the U.S. That’s not good for today’s company…

Chipotle Mexican Grill (CMG) is a $12 billion quick-serve food joint. It’s known for its fresh, healthy ingredients. But with coronavirus running amok, Chipotle has closed down in-restaurant dining. For now, it’s still serving food to go and offering free delivery options. But it may not be enough… Fewer folks are leaving home to pick up food, worried about spreading the virus further. In addition, a recent poll says 18% of U.S. workers have lost their jobs or hours… cutting back on the extra cash flow that folks need to order out.

CMG shares are in a free fall, down 44% from their February 19 peak. As the situation worsens and more folks stay in to prevent more widespread infection, restaurants will only face a rougher ride from here… 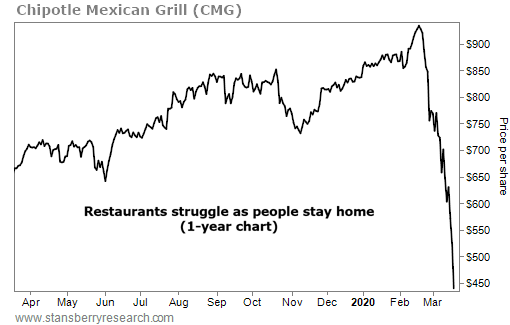