It was the most beautiful place I had ever seen so close to home.

On that summer day in 2014, I braved the Philippines traffic for about 50 minutes east... to the foot of the mountains just outside Manila. On the opposite side of the road, traffic was at a standstill.

Just by the look of it, I knew it would take me twice as long to get back home.

"No wonder people hate coming out here," I said to myself.

I made a quick stop at a nearby McDonald's to meet a real estate broker who knew the area. He took me about two miles north from there, down a road I had never been on.

That led us to a gated entrance at the Valley Golf subdivision. The road curved and followed the side of a hill full of trees to the right and a long, tall metal fence to the left.

What I saw on the other side of the fence shocked me – a beautifully landscaped golf course. At 519 acres, it was one of the biggest in the country, with two 18-hole courses. (The Augusta National Golf Club – one of the world's most famous courses – only has about 350 acres.)

We pulled over just to appreciate the view. But the real surprise came a little further down the road.

You see, opposite the golf course was a massive residential-development area. It was built in the 1970s. However, even after more than four decades, there were no more than two dozen houses.

Nobody wanted to live in Valley Golf. And I could see why...

It was nestled between old, abandoned industrial complexes and low-income communities. With so few houses and limited development, safety was obviously an issue. And the traffic to and from the location was ridiculous, even for Asian standards.

But then, the real estate broker showed me a piece of property outside the back nine of the north course. It sat on about half an acre. And it was selling for less than one-tenth the price of property in my neighborhood... just 10 miles away.

This was a hated piece of real estate that the owner couldn't get rid of fast enough. It got me curious...

So, I decided to wake up at 6 a.m. the next day and drive to the same spot, avoiding the morning rush. It took me just 20 minutes to get there.

I quickly realized this was exactly the kind of investment opportunity I was looking for.

Valley Golf was deeply unloved. Prices were at rock bottom. The area needed just one thing to soar in value... a little bit of good news.

For example, a road-widening project could improve the traffic. The abandoned industrial lots could be developed for commercial use... Or people fed up with city living could decide to build houses there.

If any of these things happened, doubling my money would be the least I could expect.

I got on the phone with my realtor and set up a meeting to buy the property. And things started to go my way.

A new six-lane highway connecting the area to the airport began construction in 2018. The big plot of idle industrial land nearby is now a four-story department store with a supermarket. And the last time I drove by, I saw four new homes being built.

Valley Golf was a place where nobody wanted to go... Now, it's a place where more and more people can see themselves living. And as a result, my investment has risen 400%.

Yes, real estate has done great just about everywhere, thanks to an unprecedented era of low interest rates. But the gains I made from this opportunity were double the average, conservatively speaking.

My experience illustrates the point billionaire investor George Soros once made... "The worse a situation becomes, the less it takes to turn it around, the bigger the upside."

My colleague Steve Sjuggerud calls it "bad to less bad" trading. The idea is to find beaten-down assets (whether real estate, bonds, or stocks). Ideally, they should have fallen 50% or more before you approach them.

Most investors expect crushed assets to stay "bad." They've been burned and want out... and don't ever want to touch them again. That gives us a chance to get in at bargain prices.

Then we wait for an inflection point – when things go from bad to "less bad." When a little bit of good news comes out and prices begin to rise... that's when we want to get in. By the time things are "good," you've already missed the majority of the rally.

Today, there's a lot of "bad" in the investment world. Chinese stocks, for instance, are some of the most hated investments in the world right now based on their recent performance...

They've been hammered by Beijing's tech regulations, geopolitical tensions, China's new outbreak of COVID-19, and the broad uncertainty caused by the war in Ukraine. It's an extremely bad time for this corner of the market.

Just remember, when things start getting "less bad" – and prices begin to recover – that's when you want to act. If you wait for the situation to swing all the way to "good," you'll have missed it.

Thankfully, I didn't make that mistake with Valley Golf. Don't make it yourself in the months ahead.

When a stock plummets too fast over a short period of time, investors often panic and sell too quickly. But when a stock dips below this metric, it's often an overreaction. And when things turn around, we usually see a rally... Read more here.

Investors are afraid of the market today. With everything that's happening in the world, no one knows when the volatility will end. But history tells us that fear could point to further gains... Learn more here: Stocks Are Becoming a Contrarian's Dream.

Today, we’re looking at a company that used to be a pandemic-era market darling…

Longtime readers know that if everyone’s talking about the next hot stock, it’s the opposite of a contrarian bet. Sure, fad stocks make for great cocktail-party chatter. But once everyone has bought in, prices have nowhere to go but down…

Peloton Interactive (PTON) is best known for its Internet-connected bikes and treadmills that offer online instructor-led workout classes. When COVID-19 lockdowns prevented folks from going to their local gyms, Peloton’s business took off. But it wasn’t long before investors and consumers saw Peloton for what it really was… an unprofitable company that sold overpriced exercise equipment. Not only has Peloton not had a profitable year since going public in 2019, but it has also had to slow production to counter dwindling demand.

As you can see, PTON shares surged to a high around $167 in January 2021. Since then, they’ve fallen nearly 90%… And they recently hit a new 52-week low. This just goes to show what happens when everyone rushes into the latest hot fad stock… 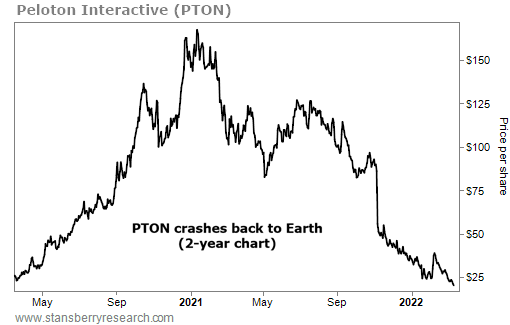