The Biggest Worry for the World's Rich and Powerful
By Steve Sjuggerud
Tuesday, April 28, 2020

Just about everything in the world is designed to chip away at wealth.

Everybody wants a cut of it – especially the government.

For the world's rich and powerful, holding on to the money they have can be just as important as growing wealth.

As billionaires see it, the problem today isn't just the market crash. They know that'll solve itself over time. For them, the real threat is the government response to it.

And as I explained yesterday, they're putting their money to work now with the next crisis in mind. Today, I'll share their biggest fear about today's crisis... and about the one to come.

To protect your wealth, you have to navigate the stock market... the property market... and the convoluted tax system. But most mom-and-pop investors don't spend much time considering a specific way the government puts your money at risk...

I'm talking about currency risk. Or put another way... inflation.

Right now, darn near every central bank in the world has gone into panic mode. In the U.S., the Federal Reserve has slashed interest rates to near zero.

That means the central bank is trying to lower the cost of lending money. Economic theory says this should encourage businesses to take out loans. And those loans are supposed to boost the economy as businesses spend money.

But the long-term effect is quite different... Remember, this Fed action makes money cheaper. And over time, it literally makes our money worth less.

There are plenty of other things the Fed is up to today. But for now, you just need to remember one takeaway...

Just about every tool that central banks have at their disposal weakens their respective currencies. And that creates inflationary pressure.

The Fed is setting us up for a world where it takes more dollars to buy the same goods and services than it did in the past. And if you're holding a lot of assets valued in dollars... that's a scary spot to be in.

That is the crisis that the world's billionaires fear. They're afraid of the government taking what they have... and making it worthless.

This system puts them on the hunt for assets with value outside of the financial system. Gold and collectibles are the perfect example.

Think about it this way...

Imagine the government is printing money like mad to try to save itself. The more money it prints to pay the bills, the less that money is worth. And you see it getting worse by the day.

You have a choice. You can hoard as much of that paper money as you can get your hands on and hope that its value will eventually recover... Or you can buy the Mona Lisa – a near-priceless artifact that has been valuable for longer than your government has existed.

It's pretty obvious what the right choice is. If the world's currencies are in peril, you move to assets that have value regardless of currencies.

Gold has been around a lot longer than any government we would recognize today. It has been used as a store of value and medium of exchange for thousands of years. And most important, governments can't devalue it.

In other words, if your government is printing money, and you can't get your hands on the Mona Lisa... a vault of gold will do nicely.

That's exactly the choice that the world's wealthy are faced with today. And it's clear which way they're moving.

Even if the long-term doomsday scenario doesn't play out, it's clear that thinking about wealth preservation is a smart move today. That means putting some money to work in gold and collectibles. It's something I recommend you consider right now.

P.S. When gold moves higher, gold stocks absolutely soar. That's the scenario my colleague John Doody sees playing out right now. And it's why he recently sat down to reveal a specific gold strategy that could help investors outperform hugely in the coming months. I even jumped in to say a few words... If you missed it, you can watch a replay of the Gold Rally Kickoff Call right here.

Ultra-wealthy investors aren't just afraid of the pandemic-related crisis that we're experiencing right now. They're afraid of the next crisis. And while ordinary investors are thinking of the recovery, billionaires are using this asset to protect their wealth... Read more here.

If you want to survive any market correction, you need to look into protecting your portfolio for the long term. That means that while other investors are losing their minds, you'll sleep easy at night knowing you've got portfolio "insurance." Learn more here: What One of the Scariest Days of My Career Taught Me.

With more than 300 million people under shelter-in-place orders in the U.S., consumers are stocking up on goods. They’re making sure that they’re prepared if the lockdowns get extended longer than expected. We’ve seen this trend in groceries and cleaning products. And the same goes for prescriptions…

Eli Lilly (LLY) is a $155 billion pharmaceutical giant. It makes important drugs like Trulicity and Humalog (diabetes treatments), Alimta (lung cancer treatment), and Taltz (autoimmune-disease vaccines). The COVID-19 pandemic has accelerated sales of these lifesaving medicines… In its first-quarter earnings report, CEO David Ricks said the company was seeing higher patient and supply chain purchasing as people stock up on the drugs they need. That contributed to a 15% jump in revenue in the quarter.

As you can see in today’s chart, LLY has surged higher recently. The stock is up more than 50% from its October lows, and it just hit a new all-time high. As people rush to make sure all their needs are covered, this stock should continue higher… 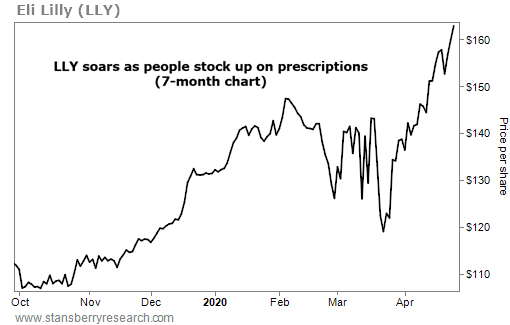