The best buying opportunities in stocks are obvious when you study history...

It's easy to pick out those dates if you look at a chart today. But putting your money to work as events like these play out in real time... that's another story.

When COVID-19 hit the scene, we didn't know if life would ever return to normal – let alone that stocks would hit new highs nearly as quickly as they crashed.

When the market bottomed in 2009, we were in the middle of the worst recession in nearly a century. It wouldn't end for months. And the system as we knew it seemed to be teetering on the edge.

I could go on and on about each example above, but I'm sure you get the point.

We all imagine ourselves stepping up to buy when opportunity knocks. It makes you feel like the hero of your own story. But that fantasy ignores a crucial fact...

Stocks don't bottom when times are good. They bottom when a lot of bad stuff is happening.

It's never easy to buy when the opportunity is best. You have to grit your teeth, ignore your gut, and simply act. It will feel terrible. But it will be the right thing to do.

My friend, we're in one of those times right now. And today, I'll explain why I'm certain stocks bottomed earlier this month...

The news is still bad today...

Inflation is at multidecade highs and is likely going higher. War is underway in Europe. And nobody knows when any of this will end.

As a result, stocks are down. The S&P 500 Index has staged a correction. The Nasdaq is in a bear market. And many of 2020's biggest winners are down by 50% or more.

Make no mistake, it's bad out there. But here's what you have to ask yourself...

Are things getting worse, or is the news getting just a little less bad?

Longtime readers know our mantra of "bad to less bad" investing. You don't want to wait until times are good to buy. By then, the easiest gains are gone. Instead, you want to buy when times are getting just a little less bad.

Inflation was a problem before the Russia-Ukraine war began. Energy and commodities have surged since. And that means high inflation is almost certain to be here for a while.

Oil hit about $124 earlier this month. It then promptly crashed to below $100. And while it's up in recent days, the talks of $200 oil seem to have died down.

Said another way, the initial fear-driven reaction is over. There's no question that more expensive energy costs will be a drag on the economy, consumers, and the stock market. But the decline we've seen shows the inflation picture is getting a bit less bad.

It's a similar story with the war itself. A few weeks ago, it wasn't clear if Western nations would join the conflict. And nuclear conflict seemed like a real possibility.

The past couple weeks have shown slight promise, though. Russia and Ukraine have begun negotiations. We don't know if they'll find a resolution... But the initial panic is wearing off.

Meanwhile, markets have rallied higher. The S&P 500 is up 8% from its March low. The Nasdaq has jumped 12%.

I don't have a crystal ball, of course. These things could change tomorrow. And we could still see more volatility from here. But for now, the news that drove stocks down seems to be getting less bad as each day goes by.

That's what always happens when markets bottom. We're seeing it right now. And it tells me that the bottom in stocks is already in.

It's a scary time to act. But you want to buy now, while the bad news is getting less bad.

"Stocks have fallen across the board," Chris Igou writes. With just about every sector taking a hit recently, buying stocks might seem crazy right now. But this metric shows us that we could see a major rally soon... Read more here.

The Nasdaq recently had its worst correction in two years. Investors are understandably spooked. But history tells us that the worst is likely behind us. We could see double-digit returns over the next year... Get the full story here: This Correction Won't Turn Into a Bear Market.

Today, we’re looking at a company with a product in high demand…

Global supply-chain issues remain prevalent. The pandemic has disrupted the flow of goods, and inflation has led to surging prices. And now, the war in Ukraine has exacerbated the chaos. But for today’s company, these challenges provided an opportunity…

CF Industries (CF) is the world’s leading producer of ammonia… crucial for the nitrogen fertilizer industry. Late last year, fertilizer prices spiked as Russia – the leading exporter of nitrogen products – and China set aside more of their output for domestic use. This shortage helped CF earn $705 million in the most recent quarter versus a mere $87 million the year before. And now, Western sanctions against Russia have further constricted the global fertilizer supply… likely leading to a greater surge in demand and prices for CF’s ammonia.

As you can see in today’s chart, CF shares are rocketing higher. They’re up roughly 130% over the past year… And they recently hit a fresh all-time high. As long as these supply-and-demand challenges persist, CF should continue to benefit… 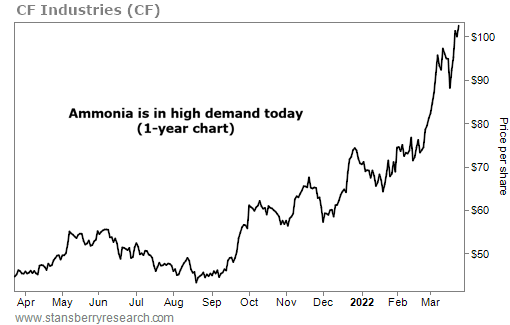