This Correction Won't Turn Into a Bear Market
By Chris Igou
Thursday, February 17, 2022

The Nasdaq just had its worst correction in two years...

The tech-heavy index fell 17% from its peak to its recent bottom. That's a big drop in less than three months.

Now investors are spooked. Is the worst of it over? Or is this the beginning of a more extreme decline?

We can't know the future. But history paints a pretty clear picture. And it tells us that the worst is likely behind us.

More than that, we just saw a rare setup. And it could lead to 27% gains in the Nasdaq over the next year.

Investors define a correction as a fall of 10%. To be in a bear market, prices need to fall 20%. The Nasdaq's fall this time was right in between, falling 17% at its worst.

Investors want to know what happens next. So I looked at history to see what we can expect.

Does the Nasdaq usually keep falling after times like this... or is a rebound likely?

In order to compare today's setup to past pullbacks, I looked at two criteria going back to the index's creation in 1971...

This gives us a clear picture of what happens after a true 15% fall... whether a full recovery, or another downward plunge.

First, while there could still be a shake-up in the next month or so, the one-year returns look promising. The table below shows what investors saw after each of the previous instances going back five decades... 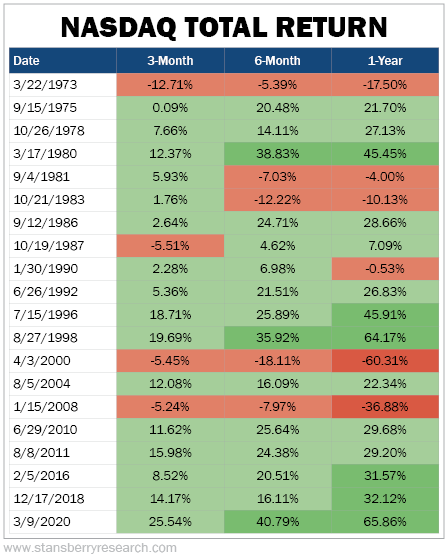 Even more, the median return over the next year was a hefty 27%.

You probably notice the two dark red returns in the one-year column. The Nasdaq did have severe declines twice in similar circumstances... once during the dot-com bust and again during the global financial crisis. But that's the exception, not the rule.

Most of the time, stocks don't crash. But volatility does happen pretty often. We've seen similar falls once every couple of years, on average.

The Nasdaq already fell more than 15%. And that means the worst is likely behind us.

In short, history shows more upside is likely in the Nasdaq in the coming year. The median return was 27% after similar setups. And that means the smart move is staying long right now.

"The market tends to do what hurts the most people the worst," C. Scott Garliss writes. And with folks sitting on the sidelines after the recent pullback in stocks, investors could miss out this year... Get the full story here: What Low Expectations Mean for Stocks in 2022.

"Fund managers have been trying to spot the next big risk to the market for years," Chris says. Investment pros are sounding the alarm today. But history shows you shouldn't let them scare you out of the market... Read more here: The Investment Pros Cry Wolf Once Again.

Years ago, Doc noted that health care companies have “one of the world’s greatest tailwinds” at their backs. According to the U.S. Census Bureau, the 65-and-older population is growing rapidly as Baby Boomers age. And the older folks get, the more medicine and treatment they need. So companies in this industry – like today’s company – will profit…

AbbVie (ABBV) is a $260 billion pharmaceutical giant. Its drugs are used to treat several diseases common in seniors, such as chronic lymphocytic leukemia (treated with Imbruvica and Venclexta) and rheumatoid arthritis (treated with Humira). In total, about 57 million people annually are treated with AbbVie’s products… And that demand isn’t slowing. The company’s total revenues were up nearly 23% in 2021, reaching $56.2 billion.

As you can see, ABBV shares are in an uptrend. They’re up more than 110% over the past three years (including dividends), and they recently hit a fresh all-time high. And as the older population continues to grow, we can expect ABBV to head higher from here… 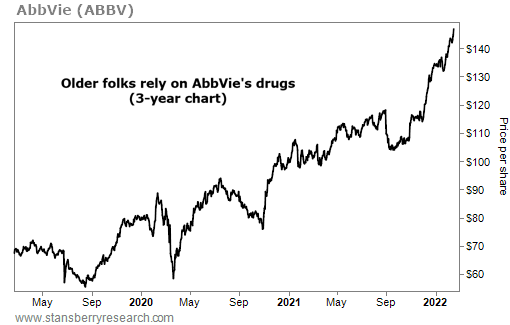