The stock market tends to do what hurts the most people the worst...

It's a saying I learned years ago when I first started working on Wall Street. Simply put, it means crowded trades rarely work.

Right now, folks are positioned for the latter. That's because many financial news articles today are dwelling on the worst-case scenarios.

All of these scenarios could damage the U.S. economic growth outlook. And as humans, we're more attracted to reading about what might hurt us than what might help us.

Today, I'll explain why these forecasts may be getting ahead of themselves... and why – if the worst-case scenario is already priced into the stock market – the "expectations hurdle" becomes easier to clear.

That would support a steady rally in the S&P 500 Index. And it means you want to own stocks, despite the scary headlines.

With Russia and Ukraine, Wall Street is worried about European oil and gas supplies. Russia is the continent's largest supplier. If the U.S. and European Union implement sanctions, Moscow could turn around and cut off energy supply to Europe.

Plus, OPEC and its allies have put limits on production to support higher prices – all while U.S. supply still hasn't recovered from the pandemic-forced shutdown of oil rigs.

If Russia shuts off supply to Europe, the region would be forced to turn elsewhere. Even though Moscow would lose out on sales, the change would mean Europe could compete more directly with the U.S. for energy supplies... driving up prices.

Wall Street is concerned that scenario would kick already-high inflation into hyperdrive. And that fear is priced into the markets today.

But what if the worst-case scenario doesn't play out?

The White House is trying to find oil and natural gas supplies to help Europe. It's aware of the threat. And it would like to reduce prices at the pump here in the U.S. and ease inflation growth.

The administration is worried about inflation. It knows the Fed may have to raise interest rates more aggressively than the three rate hikes it forecast in December. Considering that 2022 is an election year, aggressive hikes could hurt at the polls in November.

That's why the White House is currently working with both Iran and Russia to solve the problem.

Despite investor fears, sometimes the situation seems worst just before it begins to improve. And that's likely where we are right now...

Oil prices have soared almost 800% since April 21, 2020. That's an unthinkable gain. And it all comes down to lack of supply and surging demand.

That situation could change quickly, though. We could suddenly be awash in energy... causing inflation to drop... which might lead to fewer rate hikes than most expect.

The Fed could stick with its guidance for three rate hikes, while the market is pricing in five. And that's the scenario big investors don't appear to be set up for.

Again, the market tends to do what hurts the most people the worst. When everyone is sitting on the sidelines, it hurts the worst if the stock market rallies.

That's what could play out for the rest of 2022. And it means stock prices are likely headed much higher.

"People are more panicked now than they were at the start of the pandemic," Sean Michael Cummings writes. Investors want to hide their money away where nothing can happen to it. But at this stage of the Melt Up, that's a huge mistake... Read more here: The Music Is Playing, but No One Wants to Dance.

When investors all run for the exits, it's usually an indicator that an asset is ready to rebound. Right now, investors are fleeing this sector in droves. That tells us it has major upside potential in the short term... Learn more here: Hunting for Upside in This Oversold Sector.

Market Notes
THE PANDEMIC IS WEIGHING ON THIS MANUFACTURING GIANT

Today, we’re looking at a company that’s struggling as the economy remains murky…

Folks are slowly starting to accept that the pandemic has no clear end in sight… But this reality is weighing heavily on the economy. Even large businesses with footholds in a variety of industries are suffering from the uncertainty. And today’s company is a perfect example…

Honeywell (HON) is a $130 billion manufacturing conglomerate. It supplies several industries, including health care, oil and gas production, and aerospace. Folks are getting back to air travel more as the pandemic recovery continues… But despite this recent change, Honeywell’s aerospace sales for 2021 still declined 4% year over year to $11 billion. This kind of inconsistent demand – combined with inflation and supply-chain issues – led to cautious guidance of 4% to 7% sales growth for 2022.

As you can see in today’s chart, HON shares are in a downtrend. They’re down about 20% since their high in August… And shares recently dropped to new 52-week lows. It’s another stock that’s taking a hit – for now – as uncertainty runs rampant… 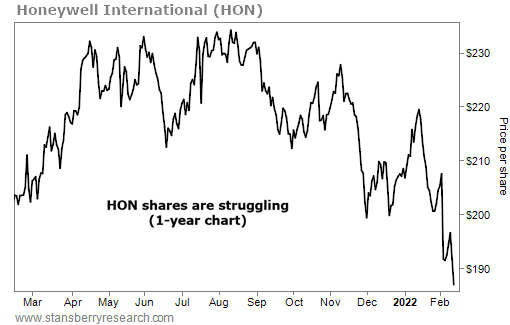