The British Pound's Misery Isn't Over Yet
By Chris Igou
Monday, April 6, 2020

If we've been reminded of one thing during this crisis, it's this...

Demand for the buck soared during the worst days in the stock market, and the dollar has risen in value as a result.

Of course, when the dollar rises, other currencies fall. One victim is a currency that has taken repeated beatings in recent years... the British pound.

The pound recently fell to a 25-year low. But don't let that fool you... This isn't a buy signal. History says more losses are likely.

"Markets can stay irrational longer than you can stay solvent..."

It's an old stock market cliché. You hear it a lot in the financial world. But that's because this happens in the market over and over again... The trend usually lasts far longer than folks expect.

First, investors buy up an asset on the cheap after a big fall. They buy thinking they're getting a great deal.

What recently happened to the British pound is a great example.

The pound tanked after the United Kingdom voted to leave the European Union in 2016. The U.K.'s currency hit its cheapest level relative to the dollar in years. And to some folks, it looked like a great value.

But fast-forward to today, and the pound has just gotten cheaper. It hit its lowest level since 1985 just last week. Take a look... 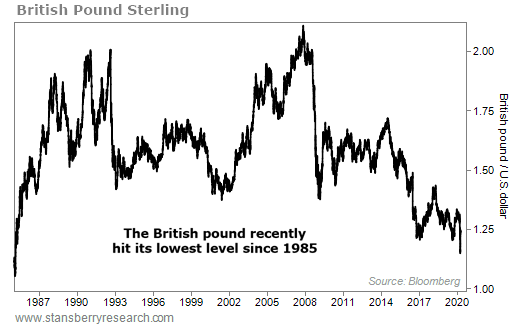 New 52-week lows like we just saw in the pound tell us one thing – that the downtrend is entering another phase of its drop.

This isn't a "buy the dip" indicator. Instead, it's a warning sign that tells us more losses are likely from here. So while the pound just hit a multidecade low, it still has room to fall further.

Since 1980, similar 52-week lows have led to losses over the next six months. You can see this in the table below...

Remember, currencies are supposed to hold their value over time. So it's no surprise these numbers are small. What's important is the sheer underperformance after situations like this one.

Since 1980, similar cases drove the British pound down 1% over three months... And they have led to a 2% drop over a typical six-month period.

That's more than double the losses you'd suffer using a buy-and-hold strategy. And it tells us that "buying the dip" would be foolish in this case.

If you're looking to buy the British pound at an incredible discount, history says you're better off waiting until the trend turns.

King Dollar continues to reign supreme. And that means more downside is likely in the British pound.

You never want to "catch a falling knife." Like the British pound, stocks are still in a downtrend today. Recently, Steve shared his blueprint for finding the bottom, based on history... For more details, check out his two-part series here and here.

Getting ahead in the market is a challenge. You're competing against the smartest minds in finance. But avoiding these three common traps can help you do just that... Learn more here: Make Investing Easier by Avoiding These Three Traps.