Editor's note: The bear market hammered Big Tech stocks this year. But another sector is creating a powerful tailwind for some of these beaten-down companies. To show you why, we're sharing an essay from Rob Spivey, director of research at our corporate affiliate Altimetry. Read on to learn which stock he believes could benefit most...

Defense makes up one of the biggest slices of the U.S. government's budget. And we have the largest military budget in the world by far.

The U.S. Department of Defense ("DoD") was allocated more than $780 billion in 2022. That's bigger than the next nine countries' budgets combined.

Most of this spending goes to military contractors like Lockheed Martin (LMT) and Northrop Grumman (NOC). They create products and provide services for the DoD.

But another less-discussed sector has been raking in more U.S. defense dollars than ever...

Silicon Valley has become central to the defense industry.

President Joe Biden has been ramping up the federal research and development budget. His latest proposal is for a massive $204.9 billion. That's 28% higher than last year.

That could mean a lot more DoD funding for Silicon Valley tech companies – and for one Big Tech giant in particular.

Google parent Alphabet (GOOGL) stands to win big as the military uses more of its technologies...

In 2017, the DoD launched "Project Maven" to integrate artificial intelligence ("AI") and machine learning into its defense strategies. Alphabet started out as a big contributor. (It eventually pulled out of the project due to employee protests over warfare technology.)

Despite the shaky start, Alphabet has continued to provide its products and services to the Pentagon in other areas.

The program aims to let the military use commercial cloud services offered by Big Tech companies. It could greatly increase the speed and scale at which the military shares its data.

Alphabet, Oracle (ORCL), Microsoft (MSFT), and Amazon (AMZN) are competing for the contract. The winner is set to be announced this month.

This is huge news for a downtrodden tech industry. This year has been tough on the sector. Companies like Alphabet that rely on advertising have been trying to fill the gaps wherever possible.

Major defense contracts like these can help stop the bleeding. Even better, they can provide a new revenue stream that can make a business stronger. If Alphabet is chosen, it will have an opportunity to solidify its lead above its peers.

But even if Alphabet doesn't win the JWCC contract, it can benefit from the defense sector in other ways...

The company is already proving that it can be a valuable resource for the military. It has some of the best AI programs around. And it's always developing new tools that could turn into contracts down the road.

Yet the market still hasn't come around to Alphabet's profitability and potential...

That might come as a surprise, since Alphabet is one of the best-known Big Tech companies out there. Investors are likely getting distracted by the company's slowing ad revenue. It was a major factor in the company's disappointing third-quarter earnings.

Investors seem worried that the threat of a looming recession could keep hurting ad revenue. But in this case, they're being too fearful.

We can see the full story through our Embedded Expectations Analysis framework. It uses Uniform Accounting – which gives us a more accurate look at the financials – to tell us what investors expect a company to do based on current stock price. 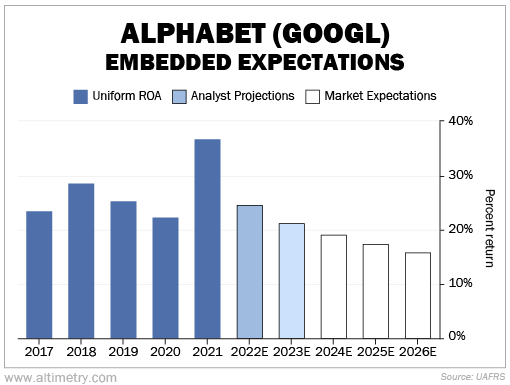 Alphabet has been caught up in the broader tech sell-off. Shares are down 30% this year. Investors are scared... and they're missing the company's potential upside.

Alphabet is adding revenue streams, including from the DoD. That should boost returns, not drag them lower.

We're still cautious on tech today. But this stock has been unfairly knocked down this year. And the tailwind from the defense sector should give it an edge from here...

Defense spending is only increasing – and Alphabet is setting itself up as a key player in the emerging Silicon Valley defense program. It has plenty of room to run as this trend continues.

Editor's note: The top-performing bull market darlings stopped working this year. Now, Joel Litman – founder and chief investment strategist of Altimetry – says an economic event is coming that we haven't seen in 15 years... And to avoid more pain, you need to be ready. That's why he's naming the three sectors that his systems say will likely crash in 2023, and the sectors that are best positioned to soar. Get the full story here.

Another crucial industry has been flooded with capital over the past decade. It's a huge long-term trend that's still poised for growth. And after a recent slowdown, investors have a chance to profit as the big players look to roll up smaller success stories... Learn more here.

"The signs of a recession aren't showing up yet in key measures like employment and spending," Brett Eversole says. "But folks still expect the worst." This disconnect in the business world is another sign that today's fears could be overblown... Read more here.