The current economy makes no sense...

Employment remains high. Consumers are still spending. And inflation, while high, is falling.

Knowing all of that, we should be doing just fine. If you ask anyone on the street, though, they assume a recession is on the way – or worse, already here.

The signs of a recession aren't showing up yet in key measures like employment and spending. But folks still expect the worst. One indicator shows this disconnect...

Business sentiment has cratered. And right now, it's nearing the same levels we saw during the 2008 to 2009 financial crisis... even without a clear economic breakdown.

One way to gauge sentiment is to ask consumers what they think about the economy. Another great way is to ask the people running major companies.

These individuals have their finger on the market's pulse. Their livelihoods depend on it. And thankfully, The Conference Board does the work of collecting their opinions for us.

This nonprofit research group surveys The Business Council – an invitation-only group of CEOs – each quarter. These CEOs head some of the world's largest corporations.

The Conference Board uses the full survey to put together its Measure of CEO Confidence. The most recent results came out last month. And they show corporate America is darn concerned about where our economy is heading in the next 12 to 18 months...

On the whole, big businesses are worried. As a result, the index has plummeted to a decade-plus low. And it's approaching the lows we saw during the financial crisis. Take a look... 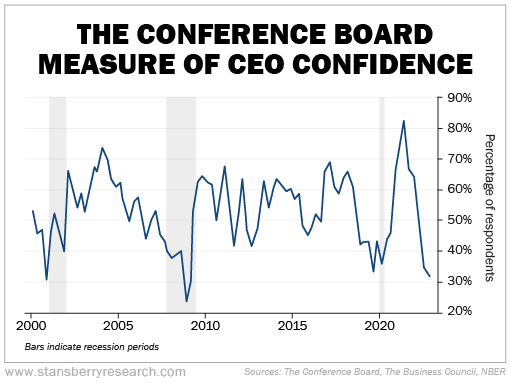 Again, this illustrates just how weird the economy is today. Unemployment is below 4%... yet CEOs believe the business world is as bad today as it was in mid-2009.

They might turn out to be correct – eventually. But the data hasn't caught up to their worries so far. That shows up in their answers to other questions...

More than half of respondents said that demand has remained the same since last quarter... And 19% said it has increased. On top of that, 44% still expect to expand their workforce over the next year. And 86% anticipate increasing capital spending next year.

This makes for an interesting paradox. If you ask CEOs what they see in their own businesses, the fundamentals look fine. But if you ask them about the overall picture, they expect everything to deteriorate quickly.

So what does this mean for investors?

Well, business sentiment is approaching record lows... despite the fact that the economy hasn't faltered yet. That's serious. And it could be a warning sign in the short term.

But while it's true that history could repeat itself, it's likely that in the long term, these fears are overblown. Recessions can be mild. Not every economic decline is as bad as the global financial crisis.

Stocks have already fallen by a lot... which means the worst could be behind us. The decline also means stocks are becoming less risky. With low valuations and more of the downside "baked in," we just aren't as likely to see a major crash.

So while the market could fall further from here, this hated sentiment means we could see strong returns once the trend moves back in our favor.

"Bear markets look a lot different when the economy is in recession," Brett explains. That's important – because a recession could still be on the way. But it's not all bad news for investors... For the full story, check out Brett's two-part series here and here.

"The average investor hasn't been this scared since the market's 2009 bottom," Brett says. This isn't enough to tell us when to buy. However, it's a great indicator of how good the opportunity is shaping up to be when the trend turns around... Learn more here.