Why the Worst of the Bear Market Is Behind Us
By Brett Eversole
Friday, November 11, 2022

As of today, the economy isn't in a recession. But if you want to know how bad this bear market could get, you need to understand where the economy is headed.

Yesterday, I explained that the typical bear market is a lot worse when it happens alongside a recession. We're not there yet. But two key indicators say that might change soon.

If you think that's the end for your investments, though, don't be discouraged. Even with a recession, there's a good chance the worst of the bear market is already behind us.

The first recession warning sign is the inverted yield curve.

This measure is based on a simple idea: Normally, long-term bonds should pay higher rates than short-term bonds. That's because if you're locking your money up for longer, the increased risk should mean you get a higher yield in return.

That's how it usually works. But in extreme times, short-term bonds end up paying more... which inverts the typical yield curve.

In fact, a recession hasn't happened without an inverted yield curve over the last 45 years. Take a look... 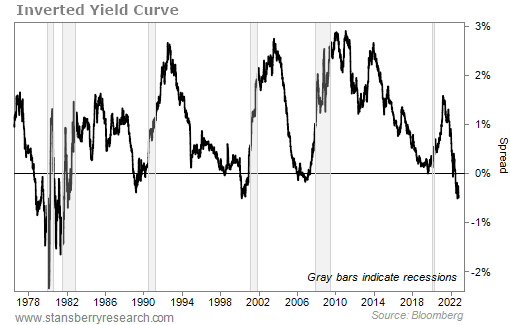 The yield curve first inverted in July. And it has only gotten more extreme since... The spread just broke below its 2000 levels.

Importantly, recessions tend to happen six to 24 months after the first inversion. That means a recession is likely sometime between now and 2024.

This isn't the only economic indicator flashing a warning sign, either. We're getting another strong signal from The Conference Board Leading Economic Index ("LEI"). I wrote about this in DailyWealth last month.

The LEI looks at 10 economic indicators... everything from unemployment to credit to housing. And watching the year-over-year moves in the index is one way to see where the economy will go next.

Specifically, when the index falls by 1% or more over a year – shown by the black horizontal line on the chart below – a recession has always followed. Take a look... 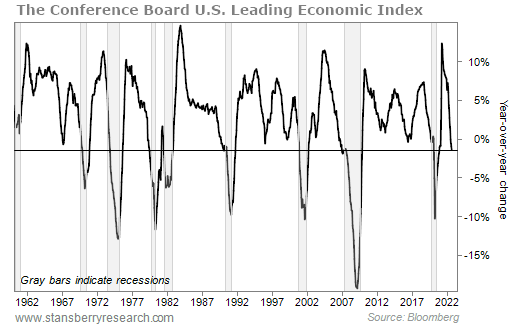 The LEI has fallen by 1% (or more) eight other times since the 1960s. In three of those cases, we were already in a recession... And the other five times, a recession started within 11 months of the signal.

In short, two recession indicators with incredible track records say the economy is about to get tougher from here.

A recession is coming. That's scary. But it also means we have a good sense of just how bad this bear market is likely to get. And the answer isn't much worse than what has already happened...

We're a full 10 months into this bust. That's just four months shy of the average length of a bear market recession. And we've seen stocks drop as much as 25% – which is well over halfway to the average decline of 40.9% we covered yesterday.

None of this means the bottom is in. But it does mean that the worst of this bear market is already behind us.

While things will likely get worse before they get better, opportunity is setting up. The majority of the pain has already hammered the markets. And that means that once the trend reverses, you'll want to load up on stocks.

Be ready to act when the time comes.

"The old joke is that insurance sales skyrocket after we get a once-in-a-hundred-years disaster," Brett writes. That's true in investing, too. Folks are rushing to protect their portfolios lately. And it's another sign that the worst is likely over... Get the full story here.

"The market mood is miserable – maybe even a little scary," Sean Michael Cummings says. But we know how good the opportunity will be on the other side – because we've seen this kind of setup before... Learn more here.