"Dispense with a horse... and save the expense, care, and anxiety of keeping it."

So read the first advertisement for a car in the pages of Scientific American.

Those magazine readers back in August 1898 probably smirked. Get rid of your horse? It was the main mode of transportation and farm work at the time.

There were some 13,000 American businesses in the carriage industry and associated-products industries – making everything from wheels to harnesses to buggy whips – and some 15 million horses.

Although those horses didn't know it at the time, they were on their way out...

The horse population peaked about 20 years after that first car advertisement.

It didn't take long for the early automobiles, the ubiquitous Model T, and farm tractors to catch on. After all, each of these technology developments made people's lives easier... better... and safer.

Soon, farmers were selling their horses to pet-food canneries. A similar fate is in store for most manually driven, internal-combustion engine vehicles, too.

We'll see similar ads for the next generation of vehicles that drive themselves. I imagine they might read, "Dispense with a steering wheel... and save time, increase safety, and add comfort."

And for the investors who take advantage of it, I believe this world-changing trend will lead to a slew of 100-bagger opportunities...

Autonomous vehicles ("AVs") are coming. Of course, there are still plenty of folks smirking. Many auto manufacturers will fight this trend. And the thought of a car without a steering wheel could be a bit unsettling for the average person.

Then again, imagine telling people last century that a big metal flying machine will take you over the Atlantic Ocean at 38,000 feet... That seems even more unbelievable to me.

As much as you may want to fight the fact that AVs are the future, the future has already begun.

You can already find AVs on our roads today. Granted, the rollout of AVs is in very limited numbers. But that is what makes this trend so intriguing. It is not often that investors have the opportunity to buy into a major, multitrillion-dollar trend in the extremely early stages.

And this is an opportunity nearly certain to come to fruition in the coming decade.

About 80% of people remain skeptical of AVs today, but that number will quickly decrease as they move from prototypes to reality to mass adoption. Not only do I believe AVs will be the norm in the future, but the trend will also lead to a huge opportunity for investors.

Chip giant Intel predicts the AV market could generate $7 trillion annually by 2050. The base year for the study is 2035, when Intel believes $800 billion will be generated. Considering that today the number barely registers on the chart, the upside potential for investors is greater than 100 times. 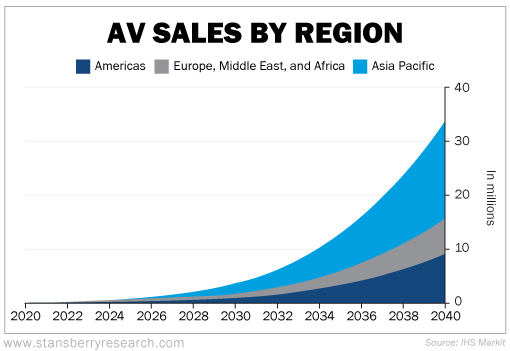 There are several leaders in this area...

For example, there's a reason why Tesla (TSLA) has been one of the best-performing stocks in recent years. I believe Tesla could be a $4 trillion company if things continue to go well...

That doesn't mean you should go buy Tesla right now.

I recommended buying TSLA in 2014. I knew that there'd be hurdles for the company... but it had a brilliant, visionary leader. And it boasted a superior product that was not only better and faster than internal-combustion engines, but it also looked slick. It felt more like a new tech gadget than a fancy sports car.

Since that recommendation, TSLA is up around 1,854%. It has now passed $800 billion in market cap.

And before the world moves to self-driving vehicles, another trend in the industry will offer investors a great opportunity to profit and is a must-have transition before AVs are widely accepted – electric vehicles ("EVs").

Take a look at the streets of any major city in America, and you'll see more and more EVs all around you. And yet, only 1% to 2% of all vehicles on the road in the U.S. are electric.

That gives you an incredible amount of runway. It doesn't matter what else happens... It's practically guaranteed that there will be more EVs on the road 10 years from now. It's that simple.

Even better, this is just one of dozens of the incredible megatrends that I see coming in the next 10 years.

We are standing at the beginning of an incredible convergence of technologies that will revolutionize almost every aspect of American life. The economy will boom despite the very real concerns of inflation, politics, and money printing... And the stock market will hand investors incredible returns.

I encourage you to take this journey with me.

Editor's note: You likely recognize Matt McCall's name. He has an unstoppable track record, with 45 recommendations that soared 1,000% or more. Steve has worked with him many times over the years... And now, Matt is joining us as our newest analyst at Stansberry Research. On October 20, he will share his biggest investment prediction in a decade... one that could alter the course of your financial future. Get the full details here.

"A handful of innovations are about to change our world in the same way the Internet did in the 1990s," Matt writes. And owning the right stocks could lead to gains similar to those we saw during the dot-com boom... Get the full story here: This Investing Advantage Could Be the Secret to Massive Wealth.

"The early days of any technological revolution are full of change," Matt says. History shows that the next generation of technology giants will forever change the world – with major profits along the way... Read more here.

We rely heavily on technology in our everyday lives. This has been especially true throughout the pandemic, with many companies shifting to fully remote workplaces. This trend has also given cybercriminals more opportunities to make mischief. Today’s company aims to thwart those efforts…

Cloudflare (NET) offers a full-service, global security network. It prevents cybercrime in more than 100 countries for domains, websites, and applications. The company serves small organizations and behemoths alike, including roughly 19% of Fortune 1,000 companies. And it has been thriving as many companies keep working remotely… In the second quarter, Cloudflare posted $152 million in revenue, up 53% year over year. And its recurring sales from existing customers reached a record 124% of that total.

As you can see in today’s chart, NET shares are taking off. They’re up more than 775% since going public in September 2019… And they just hit a new all-time high. As companies continue to seek online protection, Cloudflare should benefit… 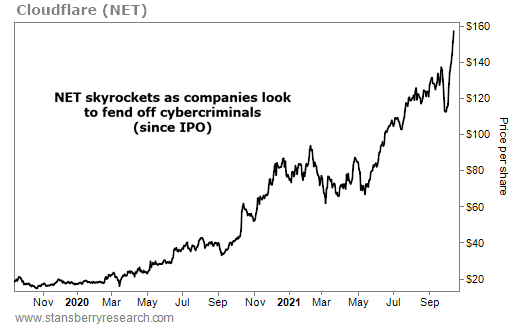