The Fuel for the Next Great Asset Boom
By Steve Sjuggerud
Wednesday, July 29, 2020

The "Bernanke Asset Bubble" was my name for the incredible boom we saw coming out of the global financial crisis.

Federal Reserve Chair Ben Bernanke put wild policies into place after that crisis. And as I explained yesterday, it's what helped push stock prices to incredible heights over the past decade.

Now, the Federal Reserve has a new face. Jerome Powell is the guy calling the shots...

Powell took over as Fed chair in 2018. And when COVID-19 stepped onto the world stage in March, he jumped into action.

Today, I'll share what he's done. And importantly, I'll explain why it could kick off a boom similar to what we saw in 2009...

Powell began by following Bernanke's playbook. COVID-19 was about to crush the economy. And like Bernanke, Powell didn't want to let that happen.

The Fed also dropped the rate it would charge banks to borrow money. And it cut reserve ratios, too, so banks could lend more without holding more in reserve. That means more liquidity in the system.

But these actions are all old news. They're basic Fed tools. Powell's next steps were brand new... And now, they're set to pump trillions in liquidity into the financial system.

These moves are basically massive lending facilities. They allow the Fed to either buy assets or provide liquidity to a market in need of it. Powell's actions include...

To be clear, these moves make what Bernanke did look like child's play. If Bernanke took baby-steps into his massive stimulus program, Powell jumped in headfirst.

The list above isn't complete, either. It's missing Powell's biggest move – by far.

That huge move was announcing a $2.3 trillion lending program. It'll lend to certain banks... make up to $600 billion in loans to small and mid-sized businesses... and even buy corporate bonds from certain business.

In total, Powell's stimulus plan could inject more than $6 trillion in new liquidity into the system.

It took Bernanke seven years to rack up half that amount. And Powell's measures are dramatically beyond the scope of anything Bernanke ever put into motion.

Now, I realize the details of these plans are confusing. It's hard to get a grip on how they actually work, who they help, and their long-term effects.

We don't need to understand them inside and out, though. All we need to know is this...

Money is now cheaper than ever. And the Fed is pumping more cash into the financial system than ever.

As we saw during Bernanke's time as Fed chair, that's a recipe for a massive asset boom.

Powell is stoking the same coals that sparked the last massive bull market. But he's got a heck of a lot more of them... And he's lighting them with fuel Bernanke never knew existed.

I want to be clear about one thing... I'm not saying this is good. The long-term consequences could be severe. We simply can't know today – we don't know if or how it could go wrong.

What we do know is what happened last time. The Bernanke Asset Bubble sent asset prices on a 10-year boom. And Powell's actions are likely setting up a massive boom in asset prices too.

Stocks are already on the rise. The S&P 500 is darn close to hitting new all-time highs. And thanks to Powell, the outlook from here is hugely positive.

That's why my advice is that you need to own stocks now.

P.S. Tomorrow at 10 a.m. Eastern time, my friend and colleague Porter Stansberry is going public with his prediction for what's next. In short, he says these Fed actions are leading us to a monetary event that will unlock trillions of dollars in wealth... And it means you have an opportunity to make gains of 1,000% or more, sooner than you think. Sign up here to learn the details.

"You won't find a brighter example of government waste than mailing direct cash payments to dead folks," Corey McLaughlin writes. With one gigantic stimulus package already delivered and another potentially on the way, the Federal Reserve will be carrying this debt on its balance sheet for years... Find out what that means for stocks right here.

During the 2008 financial crisis, the Fed went into hyperdrive to make sure companies had enough stimulus to keep the lights on. It led to the longest bull market in history. And the same factors are setting up in the market today... Read more here: Today's Surprising Echo From the Global Financial Crisis.

Regular readers know that companies that supply the “picks and shovels” for an industry can make great investments. These companies provide tools and services for entire sectors. And today’s company helps provide the broadband Internet, cable, and telecom networks that are more important than ever in today’s pandemic…

Ciena (CIEN) is a $9 billion supplier of telecommunications hardware and software. Its customers include telecom giants AT&T, Comcast, and Verizon, and it even serves the U.S. Department of Defense. Keeping these systems running is especially crucial in today’s world… With many schools and workplaces operating remotely, Ciena fulfills our need for fast connectivity. In its recent second-quarter results, the company reported “industry leading financial performance,” according to President and CEO Gary Smith.

CIEN shares are in a long-term uptrend, up nearly 130% over the past three years. And the stock recently hit new multiyear highs. Network connectivity is more important than ever today – and that’s a big tailwind for Ciena… 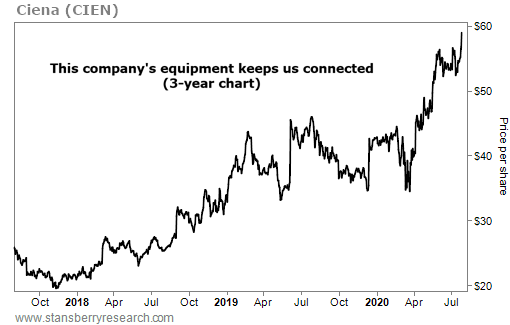