In late 2008, during the worst financial crisis of our lifetimes, Ben Bernanke did the only thing he could...

He fueled the fires of the recovery. He did everything he was allowed to do. Then he went to Congress so he could do even more.

Ben Bernanke was the Federal Reserve chairman during the 2008 financial crisis. And he had one goal in mind.

He wanted to stop another Great Depression from happening... at all costs.

Bernanke was uniquely qualified to do just that. He was a student of the Great Depression. He got interested in it as a kid. And since then, he has described himself as a "Depression buff, the same way people are Civil War buffs."

As a result of his studies, Bernanke decided that the big problem during the Great Depression was the Federal Reserve. Specifically, the Fed didn't fuel the recovery nearly enough.

His actions fueled an incredible boom... one I hope you took advantage of. And today, the same story is unfolding... one you'd be foolish to miss out on.

Money dries up during a crisis. If companies can't borrow money, more and more find themselves unable to fund short-term operations. Paying employees – or even keeping the lights on – can become impossible. And that can cause the economy to fall into a serious and prolonged slump.

Bernanke wasn't going to let that happen. So he cut interest rates to zero for the first time in U.S. history. And he didn't stop there...

He also went to Congress and helped orchestrate $700 billion in stimulus. Much of it went into the heavily criticized bank bailouts you probably remember from that time.

After that, Bernanke kicked off years of quantitative easing... which eventually pushed trillions worth of liquidity into the system.

That was another first. But anything to save the day, right?

Bernanke lit the coals to save the economy. And it worked. We didn't spiral into the depression that he feared was possible. But his policies had some side effects...

In short, they became the cornerstone of the longest bull market in history. It was a trend I saw coming. I told my readers about it in an issue of my True Wealth newsletter, published in July 2010.

Here's what I wrote back then...

He's making it easy for us. In short, he will keep money as "easy" as possible, for as long as possible – likely beyond 2012.

For a visual... Bernanke is trying to light up the U.S. economy like a grill. He's dousing it with rocket fuel and pumping away on the "start" button.

In short, while we didn't see the runaway inflation in consumer goods that many feared at the time, we did see another type of inflation...

A massive inflation of asset prices.

I called this the "Bernanke Asset Bubble." I saw Bernanke was doing everything in his power to boost the economy. And the obvious result would be a massive increase in asset values... specifically stocks and housing.

This sent the S&P 500 Index up more than 500% during the 10-year bull market. It was a phenomenal time to be an investor.

You might wonder why I'm giving you this history lesson. After all, that 10-year bull market is over now. And we couldn't possibly see anything like it again... at least not anytime soon. Right?

Well, you might not want to believe this... But the same factors I saw in 2010 are in place today. In many ways, it's even more extreme.

In short, the Fed has lit the coals of the next great asset boom. What it has done in recent months makes Bernanke's "extreme" policies from a decade ago seem downright tame.

And as I'll share tomorrow, they're almost certain to propel stocks to incredible heights in the coming years...

P.S. I hope you'll profit from this crazy situation while you can – right now... because in the long term, the effects could be disastrous. On Thursday morning, my friend and colleague Porter Stansberry is sharing a big prediction about what's coming. And he'll even share how one investment could grow your wealth by 1,000% or more, thanks to this setup. You can find the details here.

"For most folks, the whole world has changed – at least for the foreseeable future," Steve writes. The coronavirus pandemic poses a huge threat to the economy. But Steve believes there are still incredible investment opportunities today... Read more here: Exactly Where I Stand on Investing Today.

"Staying long might feel uncomfortable right now," Chris Igou says. It might feel scary in the markets, but we're seeing signals that U.S. stocks have plenty of upside potential over the coming years... Get the full story here: What to Make of the Market's Best Quarter in a Decade.

Market Notes
MORE THAN JUST AN ESCAPE FROM REALITY

With many folks around the world still staying home because of the COVID-19 crisis, people need some way to keep themselves entertained. And according to market research firm NPD, video games are not only being used as entertainment, but also as a “means of staying connected with family and friends.” That’s a boost for today’s company…

Take-Two Interactive Software (TTWO) is an $18 billion video-game maker. It boasts popular series like Grand Theft Auto and NBA 2K. And it received a huge boost from the pandemic… In the most recent quarter, both earnings and “bookings” (which measures digital and physical sales) topped estimates. And this strength is expected to continue… Take-Two forecasts bookings of $800 million to $850 million in the first quarter, well above Wall Street’s expectation of $498 million.

As you can see in today’s chart, TTWO shares are soaring. Our colleagues Ben Morris and Drew McConnell recommended TTWO shares to their DailyWealth Trader subscribers in May. Readers who followed their advice are up about 19%. Congrats to Ben and Drew on another great call! 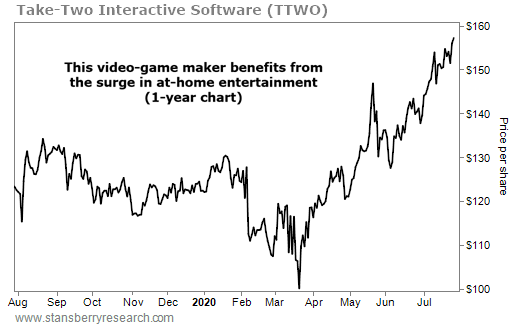