I want you to take a moment and think of a foolproof way to make money in the markets.

Really give it a go. I want you to think up something that's guaranteed to work.

If you've spent any amount of time learning about investing, you know that's an impossible task. Even the best investors go through dry spells.

This change might improve your odds though... Let's say that in this thought experiment, your plan doesn't have to be legal.

Now the possibilities really open up. Imagine you didn't have to worry about insider trading. You'd just need a way to get information... the "material nonpublic information" the U.S. Securities and Exchange Commission ("SEC") frowns upon folks using.

If you knew what companies were going to tell the public, before they said it, your trades would be infallible, right?

Not quite, it turns out.

I'll prove it to you today. And I'll share what's even more important to understand if you want to make money in the markets.

EDGAR is the system companies use to publish official documents. Here's how the SEC press release described the scheme...

The SEC's complaint alleges that Ieremenko circumvented EDGAR controls that require user authentication and then navigated within the EDGAR system.

Ieremenko obtained nonpublic "test files," which issuers can elect to submit in advance of making their official filings to help make sure EDGAR will process the filings as intended. Issuers sometimes elected to include nonpublic information in test filings, such as actual quarterly earnings results not yet released to the public.

Ieremenko extracted nonpublic test files from SEC servers, and then passed the information to different groups of traders.

The nine defendants allegedly traded on 157 stolen earnings releases from May to October 2016. They earned more than $4 million in illegal profits. But get this...

They still only made money 77% of the time.

Said another way, these folks knew exactly what a company was about to announce... before anyone else in the world... and they still got their trades wrong nearly a quarter of the time.

This might be the best possible evidence that there isn't a truly foolproof way to make money in the markets. (It also means you should stop thinking about ways to commit securities fraud... just in case it sounded like a good idea.)

It's hard to predict what stocks will do even if you know the news ahead of time. That's something that longtime investors understand, though...

Making winning trades isn't just about performance. It's about expectations. What you need to know is the news relative to what investors expect.

It usually doesn't matter if a company has good or bad earnings... It matters if it performed better or worse than analyst expectations.

Similarly, markets tend to bottom not when news is good, but when bad news improves just slightly. We just saw this happen in U.S. stocks...

In early March, the news was terrible. Russia and Ukraine were at war, commodity prices were soaring, and the Federal Reserve was about to hike interest rates. It was all doom and gloom. And stock prices tumbled as a result.

The news was still bad by mid-March. But the Russia/Ukraine situation improved slightly with negotiations... commodity prices fell a bit... and the Fed went ahead and hiked rates, but not as much as some folks thought it would.

The news was bad. But it was better than the incredibly low expectations. And look what happened... Stocks jumped double digits in just a couple of weeks.

That's the power of understanding expectations.

You'll never come up with a foolproof investing strategy... It doesn't exist. But if you understand this market quirk, you'll have an advantage even the market's biggest con artists can't match.

With the Russia-Ukraine conflict still ongoing and inflation causing prices to skyrocket, the market is full of uncertainty. But if you understand the power of expectations, you know getting in now could lead to solid returns... Read more here.

"Sentiment is on a hair trigger these days," Chris Igou says. Right now, investors are staying on the sidelines. And this is creating a perfect setup for massive outperformance... Get the full story here: Investor Fear Points to More Upside in Stocks.

Market Notes
A RELIABLE BUSINESS THAT COMES WITH STEADY GAINS

Today, we’re looking at an essential company that helps keep the lights on…

As longtime readers know, utility stocks can be great investments over the long term. They provide basic services that customers will always need, even during volatile economic times. And they often have monopoly positions in their regions, which leads to consistent profits. Today’s company is a great example…

Ameren (AEE) is a $25 billion electric company. It powers 2.4 million homes and businesses in Missouri and Illinois with electricity and provides more than 900,000 customers with natural gas. Folks aren’t going to stop using energy – especially considering that Ameren offers some of the lowest rates in the nation. Even with affordable energy, Ameren turned a $990 million profit in 2021… up 14% year over year.

As you can see, shares have steadily climbed higher over the past five years. They’re up roughly 80% in that time frame and just hit a new all-time high. This is just more proof that investing in utilities can lead to solid gains… 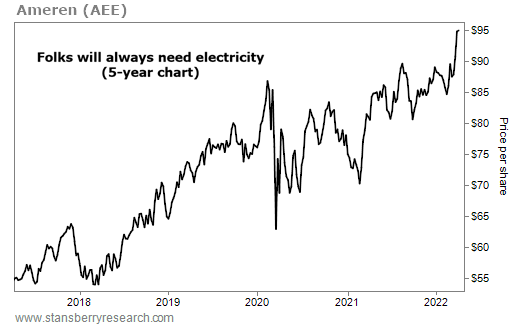