The Mortgage-Rate Spike Is Due for a Pause
By Brett Eversole
Monday, October 31, 2022

The housing market is in a precarious spot. And we can blame it on one culprit: mortgage rates.

The 30-year fixed mortgage rate has more than doubled this year. That's enough to make the typical monthly payment about 40% more expensive for homeowners.

Still, the long-term picture for housing is strong... Supply is low, and plenty of buyers want homes. This dynamic will put a floor under home prices in the long term.

But in the short term, the housing market is grinding to a halt...

There's good news, though. The mortgage-rate spike we've seen this year has hit a rare level. And history suggests mortgage rates might stop climbing – even as interest rates keep rising.

A common misconception is playing out in the world of interest rates today. It goes like this...

The Federal Reserve is hiking short-term rates. That's causing longer-term rates to rise as well. And it's why mortgage rates have jumped to a two-decade high.

That's all true... But it's only part of the story.

The Fed's rate hikes are causing long-term rates to rise. For example, the 10-year Treasury rate soared from around 1.5% at the start of the year to 4% today.

Mortgage rates have gone up much faster, though...

They've soared from around 3% to more than 7% in the same time frame. And that surge caused the "mortgage risk premium" to balloon to a 14-year high.

If you don't know this term, it's a simple idea... Treasury bonds are risk-free. Meanwhile, mortgages carry default risk. So the difference between these two rates gives us the "price" of that risk – or the risk premium.

You might expect the risk premium to be steady over time. But it's not. It tends to spike during scary times – like this year. Take a look... 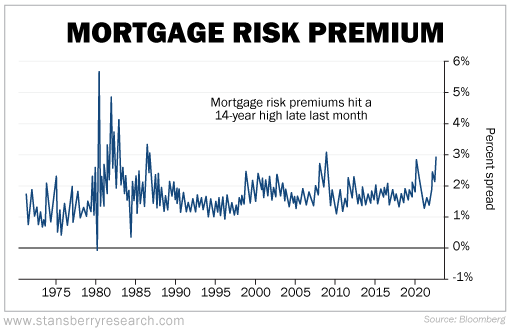 The last time the mortgage risk premium was this high was in December 2008. Before that, it reached similar levels in 1986. We also saw outright mayhem in the early 1980s, when the Fed finally broke inflation by spiking interest rates to unthinkable levels.

Today's inflation is much different than it was back then. It came on through a shock and hasn't lasted long (in the grand scheme of things). Plus, chances are that it has already peaked. So it's unlikely that the risk premium will keep soaring. Instead, it's more likely to snap back to its normal range. And that's a big win for the housing market.

It means that even if interest rates continue to rise, mortgage rates don't have to rise in lockstep. The Fed can keep hiking... But if the risk premium falls, mortgage rates wouldn't necessarily move higher.

There's no guarantee it will play out that way, of course. But mortgage rates have risen much faster than other long-term rates. That has pushed the risk premium to one of the highest on record.

Any letup in mortgage rates will ease the pressure on the housing market. Today's level suggests we may soon see some relief... and that the worst of the mortgage-rate pain could be behind us.

"Those who assume this boom must precipitate a bust are still fighting the last war," Brett explains. In short, a short-term slowdown won't kill housing. To see why a crash isn't imminent, you need to understand a few key factors... Learn more here: Don't Bet on a 2008-Style Housing Bust.

The headlines on housing might sound alarming. Recently, one list of triggers reported that we're in the final innings of a housing bubble. But it's important to look at the data – and right now, the rate of housing sales is less unusual than you might expect... Read more here.