The Renewable-Energy Trend Is Reaching a Tipping Point
By Matt McCall
Friday, August 19, 2022

Do you know where your power comes from?

For decades, the answer has been fossil fuels and nuclear power. Those sources made up at least 80% of total U.S. electricity generation from 2010 to 2020. But that picture is starting to shift with the clean-energy revolution.

So today, I'm taking a look at that shift... as well as some companies that could thrive as the world adapts to new sources of power.

You might be skeptical. But as I'll show, renewable energy continues to take market share away from traditional energy – and now, this trend is beginning to accelerate...

Last year, fossil fuels – including natural gas, coal, and petroleum – made up 61% of U.S. electricity generation. Nuclear brought another 19% to the table. And renewables – wind, solar, hydro, and geothermal power – tacked on the remaining 20%.

Renewable energy has steadily eaten into traditional energy's share of electricity generation in the U.S. And according to the U.S. Energy Information Administration ("EIA"), that trend will continue over the next two years...

On Tuesday, the EIA stated that it expects renewables to account for 22% of U.S. electricity generation in 2022 and 24% in 2023. Most of this growth will come from new wind and solar projects. But the renewables industry will also get a boost as older coal and nuclear plants are retired.

This is a tipping point for the sector. Power generation from renewables has risen by about 0 to 2 percentage points annually, depending on the year, over the past decade. There have been a couple years where it didn't go up at all... So back-to-back years of 2 percentage points growth is a big change.

You can see this in the chart below... 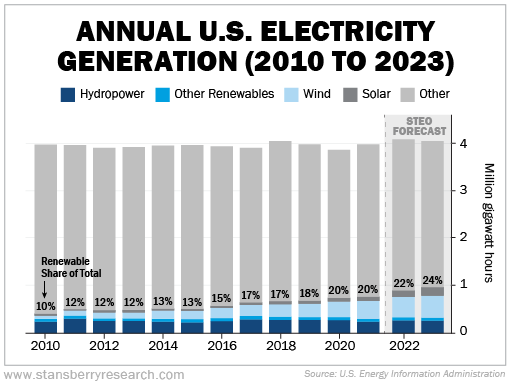 Some states are moving even quicker than this national trend. For example, Texas' share of renewable energy has soared from 10% in 2013 to 32% in 2022.

Plus, the government is about to kick all of this into high gear...

The new law represents a long-term plan. A lot could happen, and opinions are already flooding in from both sides of the aisle. But from an investment standpoint, one thing is certain...

This change will funnel hundreds of billions of dollars into the sector. With this tailwind at our backs, I believe the EIA's estimates will turn out to be conservative.

You'll want to keep an eye on stocks in the solar, wind, and battery-storage industries. These could be some of the biggest winners from this trend. Naturally, I have a few small companies that I've already added to my newsletter portfolios.

I can't give away those specific companies here. But that doesn't mean I'll leave you empty-handed...

Some of the leaders in those sectors are Enphase Energy (ENPH), SolarEdge Technologies (SEDG), Sunrun (RUN), First Solar (FSLR), and Vestas Wind Systems (VWDRY). All of these stocks have the potential to benefit as this long-term trend plays out.

Editor's note: Matt's No. 1 investment story today goes far beyond clean energy. You see, we're entering a crisis for U.S. dominance in a specific asset... one that's at the heart of the technology we use every day. The largest cash-gushing companies in the world are in desperate need of these materials. And demand is only surging as time goes on.

Right now, Matt has found six companies that are perfectly positioned to thrive as a result of the funding that's already starting to flood this part of the market. Each one has the potential to return 10X gains or more... Get the full story here.

"As long-term investors, we always need to be looking ahead," Matt writes. Growth stocks suffered a painful start to the year. But what's coming next could take you by surprise... Read more here: Why the Rebound in Stocks Is Setting Up Big-Picture Gains.

To make the biggest gains in stocks – especially small innovators – you have to be willing to hold for the long term. Most folks don't have the discipline. But if you learn to ignore the noise, it could turn into your greatest advantage... Learn more here.