Why the Rebound in Stocks Is Setting Up Big-Picture Gains
By Matt McCall
Wednesday, August 17, 2022

Editor's note: Nobody sees the big picture more clearly than our friend and colleague Matt McCall. As longtime readers know, Matt tracks the innovative megatrends driving our economy and society into the future... and the stocks that should skyrocket as a result. Learn why he says the recent market rally isn't just a "head fake"...

As long-term investors, we always need to be looking ahead.

Getting bogged down in the past doesn't help your investment strategy. What's more important is to be able to see where we're heading.

We had a rough start for stocks in 2022. That has spooked a lot of people – and led to a lot of scary headlines. But it doesn't mean the entire year is shot.

So today, I want to look at what the rest of this year could look like... and what it means for investors along the way.

As you'll see, you don't want to lose sight of the big picture – because the big rally we saw in July could lead to a major second-half rebound for stocks...

The benchmark S&P 500 Index fell 21% in the first half of the year. The tech-heavy Nasdaq Composite Index fell 30%. And if you held a lot of growth stocks, you know that many individual stocks fell even further.

But that's in the past now. And stocks had a strong rebound in July that could point to bigger gains by year-end.

And according to Chartered Market Technician ("CMT") Ryan Detrick – from the Carson Group – there's a good chance that July's rally could be the start of a bigger move higher.

The six-month gains roughly match the average annual gain of the stock market (about 10.7%). And the one-year returns are about 40% higher than the long-term average return for stocks.

You can see a summary of Detrick's recent study in the table below... 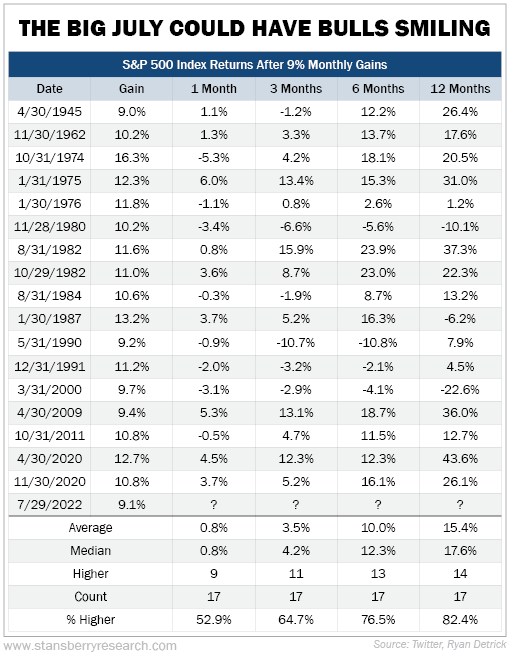 It's also important to note that after a signal, the S&P 500 was higher a year later 82% of the time.

Here are my thoughts on this...

After a rough start, the market shaped up in a big way in July. And with all the bearishness surrounding stocks after the first half of the year, the odds of a second-half surge are high. But I wouldn't pile in immediately...

Historically, August and September are two of the worst months for stocks. Over the past 30 years, the S&P 500's average return for those months has been negative 0.2% and negative 0.4%, respectively. Now, those aren't terrible returns... But there's a good chance that stocks could struggle slightly in the short term.

I want to be clear though: I would use any weakness over the next two months to add new positions for the last quarter of the year.

See, the best time to own stocks is often from October to December. Over that same 30-year span, stocks are up about 4.5% on average in the final three months of the year. That's nearly half of their average annual gains – in just three months.

Don't be swayed by everything you hear from the traditional media. The big picture for stocks is improving. And the odds that stocks will be higher a year from now are about 82%.

I like the upside potential for stocks with that tailwind. Get ready to take advantage of this setup in the months to come.

Editor's note: Matt has pinpointed a part of the market with the potential to soar 30X or higher in the coming years – regardless of market volatility. Our economy, our national security, and the technological advances we use every day... it's all riding on these companies. That's why hundreds of billions of dollars are already flooding into this critical sector.

It's also why Matt just released a report detailing the six stocks he believes will see the biggest upside. He believes each could soar up to 1,000% as this plays out... For more on this story, click here.

"Where Wall Street saw unending misery... Steve saw a terrific buying opportunity," Sean Michael Cummings writes. This was after the great financial crisis, as stocks were nearing a bottom. And it shows why it pays to stay focused on the big picture... Get the full story here.

"Making the long-term bet on prosperity remains the right move," Brett Eversole says. In June, Brett took a trip to help ring the Nasdaq's opening bell. He came back with yet another example of why nothing will stop innovation – not even a bear market... Read more here.