The Sell Signal After the Coming Boom
By Steve Sjuggerud
Wednesday, February 9, 2022

I understand if you're worried.

I explained exactly why in DailyWealth yesterday. The Federal Reserve is going to hike rates this year... possibly several times. And "everyone knows" higher rates are bad for stocks.

Investors are sure the recent fall we've seen in stocks is the start of a much worse decline.

The problem is that history doesn't support that at all. Instead, it's not the initial hike that will end today's bull run... It's when the Fed is done hiking rates.

That will be the fat warning sign that it's time to sell stocks. But importantly, we're not there yet.

Almost everyone gets this wrong. But if you study history, the pattern becomes obvious.

It's not rising rates that you need to worry about... It's a plateau in rates. That's what you tend to see before a major crash.

This makes sense when you think about it. The Fed usually hikes rates to cool down an overheated economy. But it takes time for that cooldown to actually happen... and for markets to react.

When the Fed stops hiking rates, it's usually because it thinks it has done enough... or even too much. The market tends to realize that shortly after rates stop rising. Then, stocks crash.

Let's look at previous cycles to hammer this home... starting with the late 1990s.

The dot-com boom was raging. The Fed started to hike rates in mid-1999. After a year, the central bank decided to end its rate-hike program, and rates leveled off between May and November 2000. 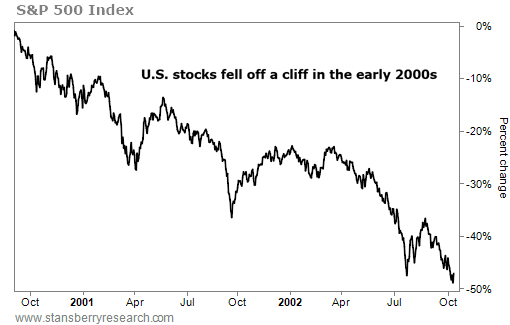 That was a brutal bear market with two full years of falling prices. The S&P 500 was nearly cut in half over that period. Ouch. 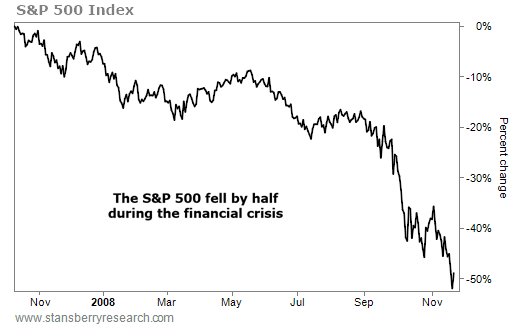 It was the worst bear market in the S&P 500 since the Great Depression. And it was the hardest period for our country's financial system that most of us have seen in our lifetimes.

Even though the Fed ended its rate hike well before the market peaked, it was a warning sign for investors. The bull run was coming to an end.

Look farther back, and you see the same phenomenon. It's not the rate hike you have to worry about... It's the plateau.

The current bull market could end when the Fed stops hiking rates. But we're nowhere near that point today.

The Fed's first rate hike is certain to happen this year. And starting then, the central bank is planning a series of hikes stretching over the next few years.

In short, we're a long way off from a plateau in rates. We've got years of hikes ahead of us before that happens. That means we still have plenty of time to profit from today's boom.

This isn't the consensus view today. But it's clear if you look at history. And it means you want to be greedy and own stocks right now.

"Stocks were overly loved," Steve writes. "But now, that incredible optimism is completely gone." When investors change their minds this quickly, it means the Melt Up could run longer than anyone expects... Read more here.

Buying against the crowd is a scary move. But it can often lead to the most upside potential. That's why it pays to invest like the professionals if you want to make money in stocks... Learn more here: Two Reasons Rich People Keep Getting Richer.

Today, we’re checking in on the world’s “financial backbone”…

Longtime readers are familiar with how we use big financial institutions to help gauge the health of the economy. When big banks are doing well, it means folks are busy spending, investing, and saving their money. Today’s financial firm reflects a strengthening global economy…

Morgan Stanley (MS) is a $190 billion global banking giant. It has offices in more than 41 countries. And it offers clients everything from investment banking to wealth-management services. Business is booming today… Not only did Morgan Stanley report record revenues of nearly $60 billion in 2021 (up 23%), but it also noted standout results in each of its business segments. Plus, it reduced the money it sets aside in case of credit losses… which shows the firm isn’t worried about the economy today.

As you can see, MS shares have been trending higher over the past year. They are up roughly 40% since then and recently hit a new multiyear high. It’s another sign that despite investor fears, the economy is chugging along… 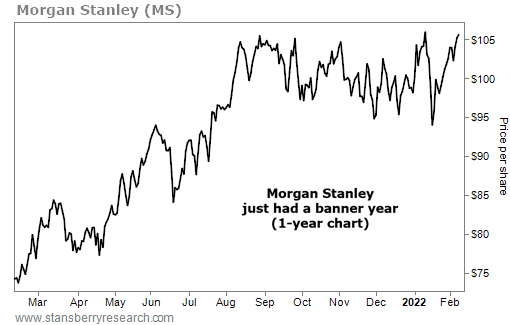