Why I No Longer Expect a Market Crash This Year
By Steve Sjuggerud
Monday, October 18, 2021

That was the headline of our March 11 DailyWealth essay. It published in the thick of the GameStop mania.

Shares of GameStop (GME) soared more than 1,000% in a now-legendary short squeeze. The GameStop story got so popular, it spread outside of the world of finance – and into pop culture...

Folks plastered memes all over Reddit to hype up the trade. Teens got on video app TikTok to talk about investing. And Netflix started talking about turning the story into a movie.

An astounding 28% of all Americans bought shares of GameStop or other meme stocks in January, according to a Yahoo Finance-Harris poll... That's a horde of speculative investors flooding into the stock market.

Just about everyone was bullish. Everyone was excited about getting rich in stocks. And that optimism meant one thing to us...

The Melt Down was imminent.

Since then, simply put, the facts have changed. So I've changed my mind...

To be clear, the Melt Down will come – at some point. Melt Downs always follow booms like the one we're in today. But I no longer think it's quickly approaching.

Instead, we have more time than we thought to profit from this Melt Up before the Melt Down arrives.

You see, we have a rare moment right now... And we must take advantage of it. It's what I hope to see in the markets – but it hardly ever comes along.

I only invest heavily when I find huge gaps between perception and reality... like with stocks in late 2008 and early 2009, or real estate a couple years later.

The perception at the time was that these stories were reaching their ends – that there was no money left to be made. The reality was far different. And that's the same situation we're in today.

Stocks were overly loved. But now, that incredible optimism is completely gone. To see it, consider what has happened to the stocks that were driving the speculative mania at the start of the year...

GameStop is still near its all-time high. But excitement around the stock is nowhere near the levels we saw earlier this year.

Just take a look at the Google Trends data below. It shows Google searches for GameStop's ticker, "GME"... 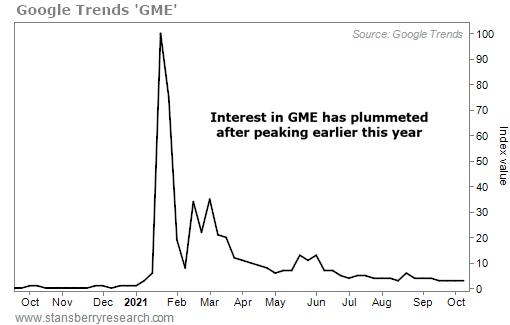 Interest in the stock has basically gone back to normal... that is, the casual market observer no longer cares.

The same is true for another meme stock that grabbed headlines, AMC Entertainment (AMC). Searches shot higher in January, and then again in June. But while shares are still trading near their highs, Google searches for "AMC" are way down...

The feverish optimism we saw at the start of the year is dying down. The "get rich quick" attitude many first-time investors brought to the market isn't in the driver's seat anymore.

This may not sound like a big deal on its own. But it's pretty crazy when you consider the year we've had...

The S&P 500 Index – which excludes both GME and AMC – is up 19% so far this year. That rally has come on the back of huge earnings growth from market giants like Apple, Microsoft, and Amazon. The economy is recovering, and the biggest companies are profiting from it (although importantly, they aren't the only ones).

Meanwhile, the index's largest fall was 5.2%. That means this has been a year of huge gains and almost zero volatility. It has been one of the easiest markets in history to make stress-free money.

Investors should be giddy in this environment. They should be swinging for the fences after seeing how "easy" investing can be... But that's not happening.

The retail-investor frenzy peaked at the start of the year. And now no one seems to care anymore.

This isn't how stocks peak, my friend... This massive change in investor sentiment tells me the Melt Down is no longer imminent. Stocks can go much higher from here.

"Most investors see new highs and get caught up in strong emotions," Brett Eversole writes. But strong emotions can often be a contrarian indicator. In fact, history shows us we could see even higher stock prices in the near future... Read more here: Don't Bet Against Stocks at New Highs.

"Bull markets don't die of old age," Chris says. With the huge rally we've seen this year, you might think the Melt Down is just around the corner. But strong moves like these usually don't run out of steam... Get the full story: This Year's Powerful Start Could Lead to More Gains in U.S. Stocks.