For the first dozen years of running my own hedge fund, I crushed the market... nearly tripling my investors' money in a flat market.

Along the way, my assets under management grew from $1 million to $200 million. And I made a lot of money for myself.

I don't tell you this to brag. I'll be the first to admit I made several big mistakes along the way. The biggest was misreading the current decadelong bull market, which led me to trim my winners far too early, hold too much cash, and put on too many short positions.

My experience – both big successes and major mistakes – has taught me exactly what works with investing... and what doesn't.

So here in DailyWealth, I'll share seven of the simplest and most important lessons I've learned, and how you can apply them to immediately start improving your investing results. We'll start with the first three today and close with the rest tomorrow.

Investing and speculating are at different ends of the spectrum.

Investing means looking for the rare "needle in the haystack" – a stock or other asset that can be purchased for far less than its intrinsic value. To find such investments, you generally must do in-depth research to understand a company and its industry, and then develop an investment thesis rooted in knowledge, information, and analysis.

Speculating involves none of that. You have no idea what something is really worth. Instead, you buy something hoping to get lucky by having someone even more foolish buy it from you at a higher price. This is gambling, not investing.

The first key to making big money in the markets is avoiding big losses. And the surest way to lose a lot of money quickly (and permanently) is to get sucked into the hottest sectors, which attract speculators and are invariably bubbles.

If you're buying what everyone else is buying, what are the odds that you've found something undervalued? Just about zero.

Investing is neither about being a momentum follower nor a contrarian... It's about thinking independently. Don't worry whether you're standing with the crowd or by yourself on any stock. Do the research, come to your own conclusions, and stick to your guns.

There's an old saying on Wall Street, "Pigs get fat, hogs get slaughtered," which cautions against being greedy.

If you're looking for the right kind of high-quality businesses whose stocks are attractively priced, every once in a while, you're going to invest in a stock that doesn't just double, but goes up five, 10, 50, or even 100 times.

To build a successful long-term track record, you must be greedy when opportunities like this arise! Investing in a moonshot stock only happens maybe once a decade – or even once in a lifetime. So it's critical that you make the maximum amount of money on them.

I owned a handful of them in my nearly two-decade career, including Amazon (AMZN), Apple (AAPL), and most painfully, Netflix (NFLX).

When I bought the stock in 2012, Netflix was deeply out of favor. Investors were worried about rising competition and content costs, as well as the company's plan to spin off its DVD-by-mail business.

But I saw a business with a product that customers loved that was more than 10 times bigger than its nearest competitor and was growing like a weed. Sure enough, shares soon took off. Two years later, the stock was up 600%.

All I had to do was sit back and profit from correctly identifying one of the greatest stocks of all time. Instead, I sold half my shares once the stock doubled. And then, I sold some more shares when it doubled again. As the stock was doubling another time, I got out of the position completely.

I thought I was being conservative and managing my risk with the position. But in reality, I was shooting myself in the foot... If I had simply held on to my original position in Netflix, I would have made about 10 times what I ultimately did. It was a costly mistake.

I've made tens of millions of dollars over the years with my favorite type of investment: a good company with strong fundamentals that encounters difficulties – often accompanied by negative headlines – that crush the stock. But if the company fixes its problems – a big if – then the stock rallies strongly.

A classic example is fast-food chain McDonald's (MCD), which did all sorts of dumb things in the years leading up to 2003. It engaged in a price war with Burger King... built too many stores, which cannibalized its older locations... and focused its marketing on lower-priced, lower-margin Dollar Menu items, rather than the more profitable things on its menu, like Big Macs.

The stock got clobbered, falling 70% from 1999 to 2003. But the company's operating cash flows were only down 15%. That kind of discrepancy is exactly what investors like me look for.

I invested 5% of my fund into MCD shares at the end of 2002. A few months later, when the stock had fallen even further, I backed up the truck and made it a 10% position. The stock soon doubled and has been a 15-bagger since its bottom.

These three keys will help you become a better long-term investor. But you need to know much more. Tomorrow, I'll share the next four lessons I've learned in my career.

Editor's note: Whitney predicted the dot-com crash in 2000... the financial crisis in 2008... and major bubbles in bitcoin and pot stocks. Now, since launching his new investment advisory, he has identified a handful of low-risk opportunities that could really take off as the market melts up. Plus, for a short time, his research is available for 40% off the regular price. Get more details here.

"It was only through hard experience that I came to learn that stock-picking is only half the battle," Whitney says. Learn more of his tips for better investing results – including one that can help put you ahead of the professionals – right here.

To make smart investments, you want to tune out the headlines... and focus on the fundamentals. Check out more examples of how to make money from beaten-down stocks in Whitney's essay: Betting on Orville: Finding Great Value in Hated Stocks.

Market Notes
THE MELT UP WAVE IS PUSHING THIS COMPANY HIGHER

Today, we’re looking at a Melt Up winner that’s set to continue its uptrend…

Regular readers know Steve believes we’re in the final stages of this historic bull market, where explosive gains are possible. Despite the pullback in May, the boom isn’t over yet… As we’ve noted, volatility is normal for this stage of the Melt Up. And as the market takes off, trading-exchange stocks should thrive…

Nasdaq (NDAQ) is the company that owns the Nasdaq and Nasdaq 100 indexes. As the original creator of the first electronic stock market, Nasdaq has marketplaces in 50 countries around the world. And it collects transaction fees each time stocks are bought or sold… So it profits as trading volumes rise – and as more investors pile into the tech names that tend to soar in the Melt Up.

As you can see in today’s chart, NDAQ is up more than 20% since its December low… and up about 170% in the past five years, including dividends. As investors pour their money into the markets, Nasdaq is positioned to reap the benefits… 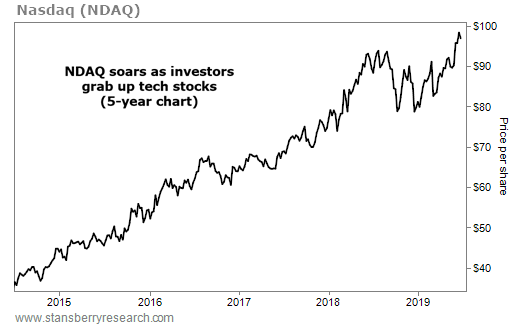