Many analysts predicted shelves would be empty by Christmas. But a round-the-clock effort by FedEx, UPS, Wal-Mart, Target, trade and labor unions, and the president himself helped save the holiday.

It took an all-star logistics team to keep Christmas 2021 on schedule. And even then, folks were urged to get their shopping done early.

This year, it will be much simpler...

Industry circles had a name for the supply-chain meltdown of 2021. They called it "Containergeddon."

Containergeddon was a freight logjam of massive proportions. Too many ships clogged U.S. harbors. Too few dockworkers struggled to keep up. Turnaround times slowed... And shipping prices soared.

This index comes from the Baltic Exchange, a London-based organization concerned with ocean freight. The Exchange surveys shipyards about cargo on various routes. It examines price levels and transit times. Then, it converts the data into a daily number.

Put simply, the index is a broad benchmark for the price of bulk shipping.

The Baltic Dry Index skyrocketed during Containergeddon... It soared 311% from January 2021 to its high last October.

Today, though, it looks like the bottleneck is over. Take a look... 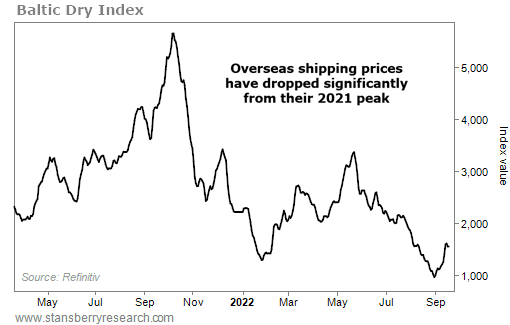 The Baltic Dry Index has fallen 72% in about a year. That means shipping is much more affordable... so retailers won't face the challenges of last winter again. This year's holiday items will be much easier to get.

What's more, many retailers already have the goods...

Every month, the U.S. Census Bureau conducts a supply survey of its own. It asks a broad sampling of U.S. retail companies to report on their sales and inventory data. Then it crunches their answers into a dollar amount. This number reflects the total value of U.S. retail inventory in America.

In the last two years, consumers took a huge bite out of retail inventories. But today, supply has never been higher. Check it out... 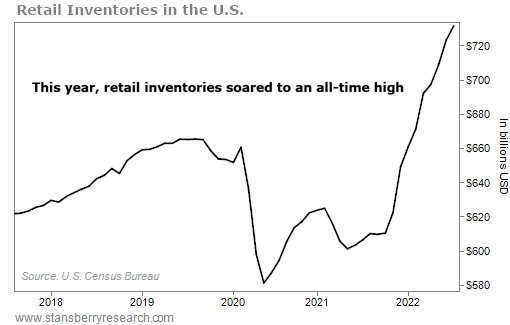 U.S. retailers prepared for the same crunch we saw last holiday season. But after a year of surplus ordering... that crunch didn't happen.

Now, retailers are facing a glut. That's a big change for the national supply picture.

Unlike last year, stores won't be scrambling to keep items in stock. They'll be flush with inventory. This supply will likely outweigh demand. If anything, the scramble this year will be to get items off the shelves... and the pressure will mount as the "season of giving" gets closer.

Expect big price reductions on durable goods like clothes, hardware, and electronics as the year continues. As we get further into winter, the discounts should get bigger and better...

That means a happy holiday for last-minute bargain-hunters. And it could help ease the brutal price increases we've faced all year.

"As the world moves on from pandemic restrictions, demand has been soaring," Joel Litman says. The Federal Reserve is trying to slow down this pent-up demand to combat inflation. But those actions will have consequences for the economy... Get the full story here.

"Consumer sentiment can be a contrarian indicator," Brett Eversole writes. While demand is holding strong for now, consumers are worried about high prices today. But for investors, this could be a sign that a buying opportunity is coming... Learn more here.