The Trend That Will Change the Future of Health Care
By Dr. David Eifrig
Friday, July 29, 2022

When you're charged $5,751 for an ice pack and a bandage... you know our health care system is broken.

That's what happened to Jessica Pell.

A couple years ago, Pell fainted, hit her head on a table, and cut her ear. This was by no means a life-threatening injury. But any type of impact to your head can be serious. And no one wants to walk around with a cut-up ear.

She went to her local emergency room – as many folks would have done. After all, she had health insurance.

At the emergency room, she was given an ice pack for her head and a bandage for her ear. But the surgeon who would have stitched her ear was out of network for her insurance... which meant the treatment could have cost her five times as much as an in-network provider.

She decided to refuse treatment. "The bill I'd probably incur would not be worth saving my ear, which was sad but a choice I had to make," Pell said in an interview with the website Vox. She later got treated by an in-network provider.

During her ER visit, all she received was the ice pack and the bandage. That's it. She wasn't treated in any other way. Doctors made no diagnosis. And she made sure that no one touched her before she knew if they were in network or not.

As you can imagine, she was shocked. But it didn't stop there. It was a classic picture of the inefficiency of the health care system as we know it...

Pell's insurance plan only picked up $862 of the bill. This was the amount it considered "reasonable and appropriate" for the services performed.

So the hospital was charging her for the remaining $4,889.

Pell wrote a letter to the hospital protesting the bill. Surely an ice pack and a bandage couldn't cost thousands of dollars. You could buy both items at your local drugstore for only a few bucks.

A month after she sent the letter, she once again received a bill for the remaining balance. Nothing changed.

It wasn't until a reporter for the Vox website began covering this story that the hospital agreed to zero out Pell's balance.

Turns out, all you need for a fair bill is health insurance and a national reporter on your case.

Think about the last time you needed medicine or treatment... Were you afraid to go to the doctor because of fears of being overcharged? How long was your wait? Did your insurance cover most of your bill, if any?

It's nearly criminal. And it can't be sustained.

Health care is a complex business. It has a lot of moving parts. And the U.S. health care system is easily one of the least efficient industries in the world...

Each part of the health care chain has an incentive to extract the most profit. For every doctor or pharmacist you see, dozens of administrators shuffle papers, set prices, and process claims. All these levels add bloat and complexity, which mean higher costs and confused patients.

We'll start with the drugmakers. Americans spend more than anyone else in the world on prescription drugs – about $1,300 per person per year.

Even though drug companies create products that save lives, they're just like every other company. Shareholders demand revenue growth and profits. Developing drugs requires a lot of capital. To get capital, you need profits. To profit on such expensive drug development, you need high prices.

Meanwhile, the insurance companies make money by collecting more in premiums than they pay out in claims. The fewer claims they pay out, the higher their profits... which ultimately leads them to push costs off to customers.

Then there's the pharmacy benefits managers ("PBMs")... the middlemen that negotiate prices and handle reimbursements between drugmakers and insurance companies. Finally, you have the distributors: the drugstores, clinics, and physician practices.

Incentives also play a role here. Providers of medicine are compensated based on "per service" – how many tests they run or how much medicine they sell – rather than "per successful outcome." And the more doctors and hospitals run tests and procedures, the higher the cost for insurance companies... And then, insurance companies will turn right around and charge higher premiums.

It all stacks up on one another... with each layer trying to earn its 5% or 10% profit margin. And it's the patients who suffer.

But this is going to change. You see, in today's economy, the companies that succeed are the big ones...

The race to get big is a matter of survival for a lot of companies. It's happening in the technology sector. We're seeing it in media too, through the competition between Disney (DIS) and Netflix (NFLX). It's the same in finance – with banks collecting bigger piles of assets to lend against.

And it's happening in health care...

The value of biotech and health care merger and acquisition (M&A) deals has shot up in recent years. In 2019 and 2020, they were about $300 billion each year – slowing down in 2020 only due to the economy shutdown... 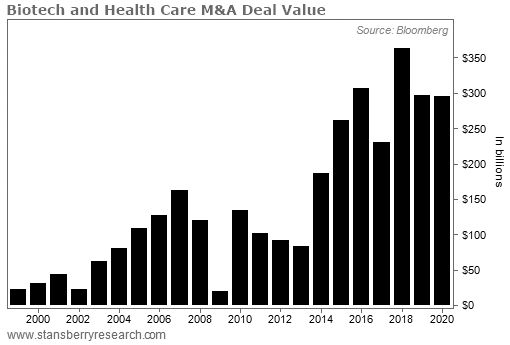 In the coming years, we're going to see the best health care companies maneuvering toward this sort of "vertical integration"...

Vertical integration is when two companies in different stages of production merge together. If Coca-Cola buys a bottling factory, that's a vertical merger. Coke makes the soda, and the bottler packages it. (On the other hand, if Coke bought Pepsi, it would be a horizontal merger.)

There are critics who worry about lack of competition. Still, vertical deals often lead to benefits for consumers... such as greater convenience and lower prices.

The more parts of the health care value chain a company handles, the more it controls costs and quality of care...

A company that "does it all" can make a little money filling prescriptions, negotiating drug prices, providing patient care, and as an insurance provider. It can cut costs by helping patients find the best route for getting their care or by swapping in generic drugs. And it's able to earn a little extra profit by operating as a health insurer.

It can also cut costs by eliminating costly administrative overhead and streamlining communication up and down the chain.

At the end of the day, consumers are simple... They want quality care that's easy to access and isn't overpriced.

We're seeing more companies start to work toward that goal as they try to win market share from their competitors. And that means now is a critical time to capitalize on the future of health care.

Editor's note: Doc has found a top company that's leading this transformation. Thanks to its key acquisitions, it has become a one-stop shop for health care... from minor illness and injuries... to screenings and monitoring... to vaccinations, remote checkups, and more.

This stock has outperformed the S&P 500 Index for the last 20 years, rising more than 700%. And given the company's stellar, forward-thinking business model, Doc and his team expect shares to soar another eightfold over the next 20 years.

It's not too late to access this recommendation... or the rest of the top-tier "forever stocks" that Doc and his team believe will outperform in the Platinum Age of Health Care. Click here for the details.

"Even experienced biotech investors don't understand this yet," David Lashmet writes. Amateur traders are seeking shelter in health care stocks right now amid ongoing market volatility, chasing profits by searching for blockbuster medications. But that's not the only way to play this sector... Learn more here.

Many investors are hesitant to explore biotech stocks simply because they don't know how to identify opportunities in the health care space. But you can find massive winners in these stocks by using a few basic indicators... Read more here: Use These Simple Clues to Find Winning Biotech Stocks.