The U.S. Could Suffer a Sideways Market... for Years
By Dan Ferris
Wednesday, October 26, 2022

Editor's note: Today and tomorrow, we're sharing more from Dan Ferris, in a series adapted from this month's issue of Extreme Value. Dan says we're still in the early stages of a painful market... one that could wreak destruction on your retirement savings. But for a certain type of investor, even brutal market environments may have a silver lining...

This has been a rough year – to put it mildly.

In such dire conditions, I'm not comfortable telling you to put new money to work today. But I do believe now is the prime time to start planting the seeds of optimism...

While we're not out of the woods yet, a major opportunity to buy stocks at bargain prices is approaching – one that will likely lead to above-average compounding for many years.

There are two main reasons I say this. The first is obvious: Major equity indexes all over the globe have fallen by 20% or more.

The second reason I see a major impending buying opportunity is the possibility of a sideways market. This is an extreme scenario... but it plays right into our strategy of buying good businesses at discounts to intrinsic value.

A sideways market is when the major stock indexes ratchet up and down but fail to make new highs for 10 years, 20 years, or more. During these times, even the most experienced investors can succumb to fear or exhaustion, give up, and lose their fortunes.

In Japan, investors have been stuck riding this emotional roller coaster for the past 33 years. And now, it looks like we may be boarding our own rollicking ride here in the U.S...

According to this chart of the Dow Jones Industrial Average, there have been four major sideways markets in the U.S. since 1900. Each occurred after a mega-bubble or other type of bull market. The worst one lasted 25 years, from 1929 through 1954... 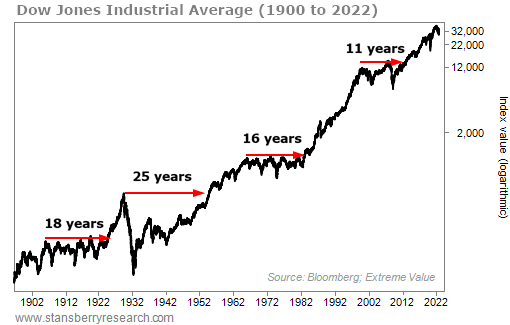 And it wasn't just the Dow. After the dot-com bubble peaked in early 2000, the Nasdaq Composite Index suffered a 15-year sideways market... 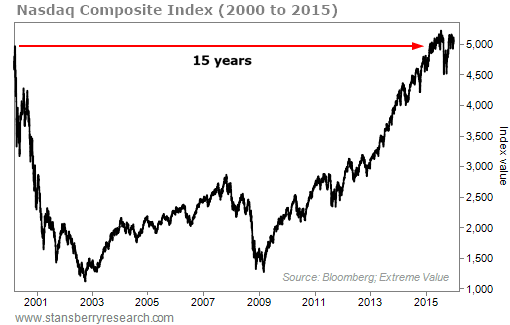 The scariest example of a sideways market occurred in Japan from December 1989... until now. That's right. It has been 33 years since the Japanese stock market peaked. And it still hasn't made a new high. In fact, it made a new low 19 years in... 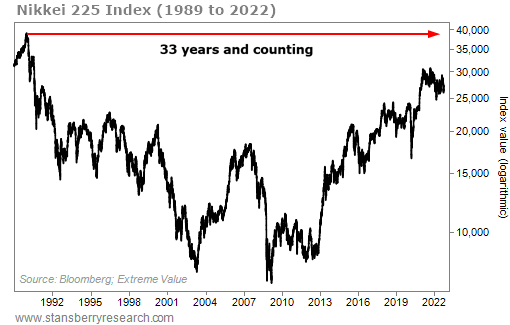 The knee-jerk reaction to these charts might be, "What's the big deal, Dan? You can just keep buying, and you'll wind up making a lot of money once the market reaches a new high."

True, but you'll be so psychologically brutalized by the roller-coaster ride that you'll be far more likely to sell out at huge losses just to make the pain stop.

If the current setup here in the U.S. plays out anything like it did in Japan, it could take decades of volatility before we hit a new high. Imagine this happening to the S&P 500 Index, starting at the January 2022 peak. Imagine retiring in 2022 and enduring nothing but volatility for 15... 25... or 33 years.

It's brutal. It could ruin millions of folks' retirements. You can't afford not to prepare for it.

The odds of the U.S. replicating Japan's extreme sideways market seem so remote that nobody ever talks about it... but there are some parallels that we can't ignore.

Then in 1990, all that reversed. Japan cranked up interest rates, speculators fled, real estate values plummeted, and stocks entered a bear market.

Does any of that sound familiar?

The good news is that a sideways market doesn't have to destroy your wealth. Tomorrow, I'll outline the unique buying opportunity such a market will set up – one that could arrive sooner than you think.

Editor's note: The market doesn't have to see 20 years of zero returns to end badly for investors. Even just another 20% decline – or a year or more of flat returns – could be devastating to millions of Americans. And while it's also setting up a long-term opportunity, if you plan to profit, you'll likely need to change everything you know about investing... To find out why, get the full story from Dan right here.

"Several times this year, investors were fooled into thinking the bottom was in," Dan says. These deceptive rallies are common in bear markets. But history shows the pain likely isn't over yet... Learn more here: Don't Get Burned by Bear Market Rallies.

Some high-profile investors have started "buying the dip." But according to Dan, diving back into the market now is a big mistake – because most major asset classes are still in a massive bubble... Read more here: 'This Time Is Different'? I'm Not Buying It.