The Unthinkable Is Happening Right Now in Europe
By Steve Sjuggerud
Friday, April 23, 2021

Banks in Europe are doing the unthinkable...

They're turning away large cash deposits. I'm not kidding...

Deutsche Bank, one of Germany's top lenders, is effectively turning away many deposits of 100,000 euros or more. And if it does accept your deposit, then it will charge you a 0.5% annual fee to keep your money in the bank.

Today, I'll explain why it's happening...

We've gotten used to near-zero interest rates at major banks since the global financial crisis. But paying them interest on your savings? That feels like an idea from another planet.

It's happening all over Europe, though. The same is true for Commerzbank, Germany's second top lender.

Here's what a Commerzbank spokesperson had to say about it in a recent Wall Street Journal article...

Our primary objective is not to collect such a deposit, but to advise and reallocate funds to other forms of investment.

The fees are a tool to drive new large deposits elsewhere. And customers are getting the message.

One customer moved his money away from Commerzbank. His reasoning – shared in the same article – is incredibly obvious. As he put it...

I wouldn't mind receiving nothing for my deposit, but being asked to pay is just too much.

With rates going negative, folks can't stand the idea of losing money on their accounts. It's a call to action like we've never seen before.

More than 230 banks in Germany alone are charging fees like this to private customers. While negative rates have been around in Europe since 2014, this is a relatively new phenomenon.

In 2014, when the European Central Bank first started charging banks negative rates, European banks pledged not to pass the cost to customers. For six years, they were able to eat the negative cost and still be profitable. That's no longer the case...

With pandemic uncertainty, and people saving more due to staying home, folks have flooded banks with cash.

Deposits are a liability for banks. The more deposits a bank holds, the more money it has to store away at the central bank to cover those liabilities. Before the pandemic, this wasn't a big deal... Banks could cover the negative rate charged by the European Central Bank and still profit on large deposits.

But with deposits through the roof, they can't afford to eat that negative rate anymore. So they are either charging fees or turning away potential customers, using new online tools to guide folks elsewhere.

This is truly crazy. Banks thrive when they're able to grow deposits. But now, they're actively trying to avoid it. And everyday customers are facing the unbelievable scenario of paying to deposit their cash.

If you don't live in Europe, this might not affect you personally. But this crazy banking quirk does mean something big for all of us as investors.

Folks in Europe now have a few ways to handle their cash...

They can pay a fee to store it at a bank – or earn zero interest, in some cases. They can keep it under the mattress, which isn't ideal. Or they can put that money to work somewhere else... like the stock market.

That's exactly what these low-interest-rate policies are designed to do... get folks investing. And with negative rates pushing Europeans out of the banks, that's a near certainty in the months ahead.

P.S. On another note... I've been seeing a huge shift happening in the financial markets. And the decisions you make now could affect your wealth for the next decade. I'm covering all the details in a free online event on April 29... And I'll even share two special opportunities that could help you grow your money as much as 1,000% in the coming months. Click here to sign up.

"Markets are all about expectations," Steve says. The recent stimulus efforts, combined with historically low interest rates in several parts of the globe, had most folks expecting the dollar to crash. But history says this could be the beginning of a major move higher... Read more here: $1.9 Trillion in Stimulus Is Kicking Off a Dollar Rally.

Fund managers were fleeing growth stocks for the safety of value back in March. But the setup we're seeing today says we could see major gains over the next year... Get the full story here: The Growth Stock Rebound Is Just Getting Started.

Regular readers know that we like to check in on certain sectors as “bellwethers” for the overall economy. When materials are moving and folks are building, it’s a bullish sign for many kinds of businesses. Today, we’re seeing this at work with a maker of construction materials…

Vulcan Materials (VMC) mines and sells “aggregates” – materials like crushed stone and gravel used in construction – along with asphalt mix and ready-mixed concrete. It’s the largest aggregates producer in the U.S. When Vulcan is doing well, it means folks are busy building. And last year, its financials held roughly flat… Despite the COVID-19 crisis, Vulcan brought in nearly $4.9 billion in revenues. Chairman and CEO Tom Hill also recently noted that construction employment gains show that demand is recovering in Vulcan’s market.

VMC shares are up 130% from last year’s lows. And they recently hit new all-time highs. As construction picks up and the economy recovers, that trend should continue… 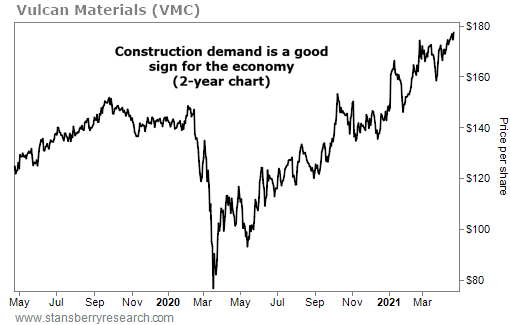