Nothing like this has happened in the history of the European Union.

In 2016, the United Kingdom voted to exit the EU. It was the first time a country had ever attempted to leave.

The exact fallout wasn't clear back then. Trade relationships were thrown into uncertainty. And after three years of negotiations between the U.K. and the EU, there is still no clear path for the U.K. to exit.

The two sides set an October 31, 2019 deadline to get a deal done. Time is running out... And with no clear plan, the British pound has been decimated.

The pound recently hit a multidecade low, and futures traders have fled as a result.

This could actually be good news, though. When futures traders all bet against the British pound like they are doing today, history says a double-digit rally is likely.

Making contrarian investments is one of the few ways you can get an edge in the market. If you find what everyone hates, it usually means that asset is poised for a rally.

That's the case with the British pound right now. We can see today's negative sentiment through the Commitment of Traders ("COT") report.

This is a weekly report that tells us what futures traders are doing with their money. And it's a great contrarian indicator.

When these traders are all betting in the same direction, you're better off doing the opposite. And today, futures traders are betting that the British pound will continue falling.

We've only seen sentiment this negative one other time in history. And similar cases have happened just a handful of times over the past decade. Take a look... 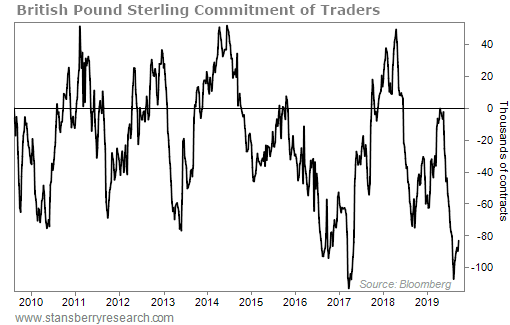 Since 2009, we've seen three other major sentiment lows in the British pound... And each case led to a strong rally.

We saw a similar instance in 2010. Futures traders were all betting against the pound in early May. It bottomed just a week later and then rallied 17% through April 2011.

The most recent occurrence came right after the U.K. voted to leave the EU. The pound went into free fall after the vote was finalized. And by March 2017, futures traders were all betting it would get worse.

That was the wrong bet again. The currency went on to rally 15% in little more than a year.

Today, we are seeing another bullish setup in the British pound. Futures traders are giving up on the currency, but history says that negativity is creating an opportunity.

No one expects the pound to rise... But a double-digit rally in this normally slow-moving currency is possible now.

"The 'professionals' on Wall Street are ignoring the most important anomaly in the market today," Steve writes. "And they're advising folks to do the exact wrong thing as a result." Steve recently told readers about another situation in the markets where savvy investors can benefit from a sentiment extreme. Learn more here.

"Despite the recent rally, investor panic is setting up another buying opportunity," Steve says. "And double-digit upside is possible as a result, starting now." Get the full story here: Investors Are Scared... And I'm as Bullish as Ever.

Market Notes
HOW GRAVEL AND STONE ARE FUELING THE U.S. ECONOMY

Today’s chart is painting a bullish picture for the economy…

As longtime readers know, we like to look at economic bellwethers to “check the pulse” of the overall economy. When people are shopping, goods are moving from place to place, and new buildings are going up, it’s a good sign that the economy is going strong. Today’s company is benefiting from the overall boom…

Vulcan Materials (VMC) is America’s largest producer of construction aggregates, like crushed stone, sand, and gravel. It also produces construction materials like asphalt and ready-mixed concrete. So when the economy is going strong and folks are building, Vulcan Materials is providing their supplies. The company recently reported second-quarter earnings, with net income of $198 million – up 24% year over year. Vulcan also sees “robust growth” in demand for public construction projects… with growing demand in private construction as well.

As you can see, VMC shares are in a solid uptrend today. They’re up around 50% since the beginning of 2019. And as the economy chugs along, that trend should continue… 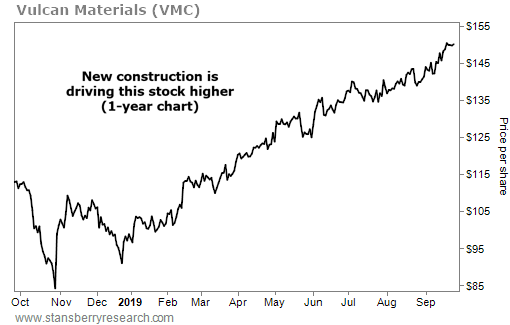