These Beaten-Down Stocks Are Getting a Huge Influx of Cash
By Brian Tycangco
Tuesday, November 8, 2022

It's hard to find a bright spot in the markets today.

The U.S. is still struggling with inflation and rate hikes. And over in China, the world's second-largest economy, things aren't looking much better...

Inflation in the country is at a mild 2.8%. But the Chinese government is sticking with its "zero-COVID" policy. It has locked down entire towns and cities when cases have started to rise... disrupting businesses, supply chains, manufacturing, and daily life.

Meanwhile, President Xi Jinping has secured a third term after the National People's Congress in China, setting off worries about the country's path of economic reform.

The mood has gotten so bearish that the Hang Seng China Enterprises Index has crashed below its lows from the 2008 global financial crisis. Foreign investors can't get out of Chinese stocks fast enough.

While this was happening, however, investors in mainland China were taking advantage of the fire-sale prices in Chinese tech stocks listed in Hong Kong... thanks to a new loophole.

To buy stocks listed in Hong Kong, investors in mainland China have to use a cross-border trading program. It's called the Stock Connect.

Until recently, mainland investors could only buy a handful of Hong Kong-listed tech stocks through the program. These included social media and gaming giant Tencent, food-delivery behemoth Meituan, plus two of the country's leading electric-vehicle makers, Li Auto and XPeng.

Direct ownership of most of China's biggest tech winners – like Alibaba, JD.com, Baidu, and many more – is still off-limits to mainland investors. These stocks aren't yet listed on the Stock Connect.

But now, folks in mainland China have a way to own them indirectly...

Two of the newly approved funds track the Hang Seng Tech Index – the benchmark for Hong Kong-listed tech stocks. Buying either of them would give mainland investors a stake in most of the major Chinese tech companies that aren't yet available through the Stock Connect.

Investors have been taking advantage of this loophole during the epic sell-off in Chinese stocks...

The chart below shows the percentage of shares outstanding owned by mainland Chinese investors in the CSOP Hang Seng TECH Index Fund (3033.HK). That's one of the ETFs that joined the Stock Connect as of July. Take a look... 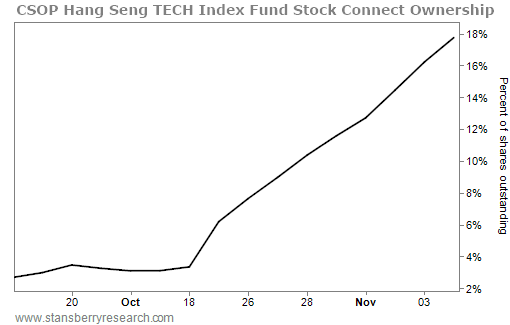 As the sell-off in Chinese stocks reached a fever pitch last month, Chinese investors started buying up this ETF in increasingly large amounts. From just 3.4% ownership on October 18, mainland investors went on to hold 17.8% of shares outstanding by November 4.

That's a fivefold increase in ownership in less than three weeks.

It's difficult to know who has been buying up the ETF in mainland China. It's likely a combination of state-owned funds, pensions, and retail investors.

But this chart shows that mainland investors see something that the rest of the world has missed... They see opportunity in one of the most hated corners of the global markets.

Chinese investors know more about their own companies than foreign investors do. And with prices so low, all it will take is a little improvement to spark a powerful rally.

That's already starting to happen. Although officials have denied it, people have been speculating that Beijing might ease up on its zero-COVID policy. As a result, Hong Kong-listed tech stocks recently made their highest jump since 2015 in a single day... when the Hang Seng Tech Index shot up 8% to their intraday high on November 4.

This doesn't necessarily mean that a new bull market has begun. China's economy is still facing headwinds, and the road back to growth isn't going to be easy.

But with the economy bound to reopen sooner or later, local investors and domestic funds are already "backing up the truck" to buy shares. This is a market to keep on your radar.

"This was a hated piece of real estate that the owner couldn't get rid of fast enough," Brian writes. But all it needed was a few points to turn in its favor. Find out why buying into a turnaround is one of the most profitable choices you can make – and how you should time these kinds of opportunities – right here.

"If you're a long-term investor, the money you put to work in the months to come will likely go toward some of the best buys of your life," Chris Igou says. That's because the biggest gains tend to start after stocks are completely beaten down... Learn more here.