This 'Big Picture' Signal Shows a Peak on the Horizon
By Dr. David Eifrig
Friday, May 17, 2019

Earnings season started off with a bang last month when megabank JPMorgan Chase (JPM) posted record profits and revenues for the first quarter of 2019, beating expectations.

Most of the analyst expectations about first-quarter results were negative – so the market breathed a sigh of relief. The S&P 500 Index ended the day up... But the following week, it went down again after disappointing results from Goldman Sachs (GS) and Citigroup (C).

It's fun to try to predict the day-to-day movements of the market during earnings season. And it's fun to guess which companies will beat expectations and which ones won't...

But it's usually not worth the effort.

Most of us aren't day traders. So daily market fluctuations don't concern us. Whether it's earnings season or political bluster tossing the markets around, we are just trying to grow our portfolios for retirement... or we just want to protect the capital we have now.

We care about the big picture.

So the real question is... when is it time to prepare for the big drop?

Today, I'll show you what one indicator is telling us about the big-picture health of the markets.

The short answer... stocks are still months away from peaking.

The chart below compares recent survey results from the National Federation of Independent Business ("NFIB") with gross domestic product ("GDP") growth. Each month, the NFIB surveys about 800 small businesses and asks each for its single most important business problem.

Historically, when a high number of businesses answer "the cost of labor" it's a warning sign for an economic downturn... 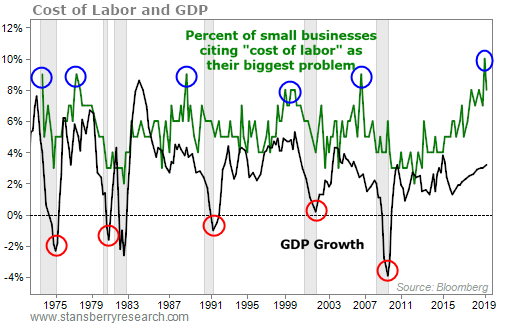 As you can see, this indicator has been an extremely accurate predictor of upcoming recessions. When we see a spike in the percent of businesses citing the cost of labor as their single most important problem, a recession typically starts within a year or two. And the current percent of respondents who answered "the cost of labor" recently hit an all-time high of 10%.

We care about the cost of labor because wages are the single biggest driver of inflation. And inflation is a major cause of recessions.

Inflation is the general rise of the prices of goods and services over a period of time. As prices rise, the same amount of money buys you less.

Businesses have to pay employees more and pay more for materials. That cuts into profits. Fewer profits mean companies have less money to invest in their business, buy back stock, pay dividends, and pay down debt... That's when things start heading south.

The chart below shows the same NFIB survey compared to the S&P 500... 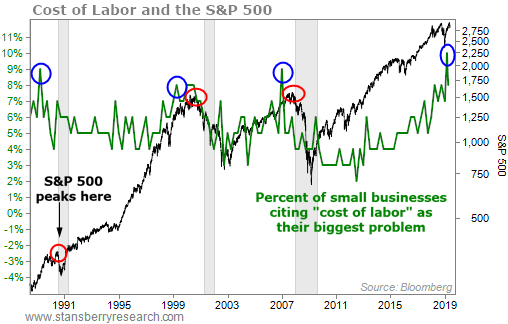 On average, over the last three big market drops, the S&P 500 hasn't peaked until roughly 12 months after an extreme in the NFIB survey.

So whether the bear market is six months away or a year out, my advice remains the same...

Hold quality stocks in your portfolio – companies that make products that will be around for the next several decades and that you can see yourself owning for the rest of your life. I also recommend having some of your portfolio in cash or cash-like investments and owning some "chaos hedges" like gold.

It's likely going to be a bumpy ride over the next year... So expect some volatility. But if this big-picture indicator is correct, stocks still have time to rise before the peak (and inevitable crash).

Editor's note: Stocks can still go higher from here... but the next bear market is closing in. If you missed our Bear Market Survival Event on Wednesday night, be sure to watch the replay online. You'll learn more ways to track the market's health, and which steps you must take – right now – to avoid devastating losses. But act fast... This video is only available for a short time. Go here to watch it now.

"I don't see a recession or stock market crash around the corner just yet," Austin Root writes. "But signs of trouble are starting to form in the distance." When the bear market comes, you need to be holding the right stocks... Get the details here: Own These 'Steady Eddies' in the Next Market Crash.

"We often make real, costly mistakes worth hundreds of thousands of dollars when investing or planning our retirement strategies," Doc says. Investors make this one all the time... and they'll pay the price during the next market downturn. Learn more about Doc's strategy to clear the "junk" from your portfolio right here.

A decade ago, you needed cable TV to get the best programs. Now, online video-streaming services like Netflix (NFLX) offer huge volumes of low-cost, on-demand content… And Americans are increasingly “cutting the cord.” Businesses that didn’t adapt quickly fell behind…

That’s what happened to electronics company TiVo (TIVO). In its heyday, TiVo’s recording devices were the best way to watch TV on your own schedule… But they aren’t so impressive now. To watch what you want, when you want, you no longer need a $200 TiVo device with a $15 monthly service fee… So it’s no surprise TiVo lost almost $27 million in the most recent quarter – 40% more than it lost over the same period last year.

TiVo hit a major peak back in 2011… the same year Netflix doubled down on online streaming. Since then, TIVO has fallen from nearly $70 a share to barely $7, and it just hit a multiyear low. Missing this big tech trend was a costly mistake for TiVo… 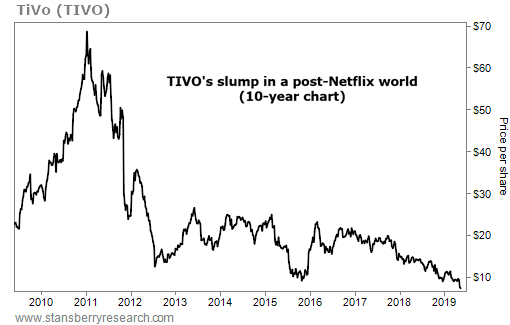