This telecom giant had avoided most of the carnage this year. A stable business and healthy dividend yield kept investors from fleeing. But that all changed in a hurry.

The stock crashed 12% in just three days near the end of July. That swift decline sent shares to their lowest price since 2017. And it also set up a rare oversold setup.

This is a darn good buying opportunity, based on history. And we can expect double-digit upside from here.

The telecom industry was a hot growth sector in decades past. Nowadays, it has a lot more in common with "boring" utilities.

These companies keep our phones working and our Internet fast. We need those services. But now, the Internet is everywhere... And instead of looking for huge outperformance, investors buy telecom stocks for stability and safety.

Verizon Communications (VZ) is the biggest of the bunch. And like I said earlier, it had weathered this bear market wonderfully... until the end of last month.

A double-digit drop in just three days is uncommon for a steadfast "utility" like Verizon. And that nosedive plunged the stock into oversold territory.

That's based on the relative strength index ("RSI"). This tool looks at the recent price action. And it measures if a stock has gone too far, too fast in either direction.

Generally, an RSI above 70 tells us that the investment is overbought and a pullback is coming soon. An RSI below 30 means the opposite. In Verizon's case, its RSI sank to 21. Take a look... 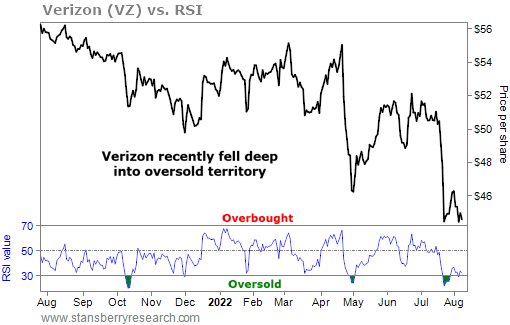 Verizon's crash pushed its RSI well below the oversold threshold. This tells us that the decline is likely overdone... and that a rally is possible.

To test this, I looked at every instance where Verizon fell below and then rose back above an RSI of 25. That's a classic pattern that shows the decline is over and a bounce is on the way.

This kind of move has only happened 25 times since 1990. And the results are impressive. Take a look...

Again, Verizon is a boring business. Most of its long-term returns come from dividends. So since 1990, its share price has risen just 1.7% per year (excluding dividends).

Buying after an oversold RSI setup leads to much better outcomes, though. Similar cases led to 7% gains in three months and 11.6% gains over the following year. That's massive outperformance in a normally slow-moving stock.

Of course, buying today would mean you're fighting the trend. That adds a degree of risk. But if you're a long-term investor and you need some yield in your portfolio, buying now gives you that with double-digit upside potential.

That makes this a trade worth considering today.

One "boring" commodity that's crucial to the economy just staged a rare crash. But after a fall this big, incredible gains are likely, based on history... Read more here: This Metal Crashed... Now a Huge Rally Is Near Certain.

Most investors think they have to choose between growth stocks and "boring" value stocks. Now, though, even fantastic growth companies are trading at historically low valuations... Learn more about this rare setup here: The Bear Market Crushed Growth Stocks... And That Means Opportunity.