This Coming Tech IPO Shows How Out of Control the Market Is Today
By Dan Ferris
Saturday, September 14, 2019

We've seen a plethora of weird, unprofitable initial public offerings ("IPOs") over the past year and a half...

Remember the gross-out TV show Fear Factor, where guests were challenged to do crazy things like climb into a box full of snakes or eat live, giant cockroaches?

That's where we are now in the market... It's the "Fear Factor IPO" market, where investors have to buy into crazy new stocks. Those who require profits are labeled cowards.

The TV sets are special because for only $39 a month, you get to watch somebody you don't know pedaling an identical machine. The person on the screen is an instructor who tells you what to do. He tells you how fast to pedal and shouts stuff like, "Good work!"... even if you're just sitting there eating potato chips.

But it's good the person is there... How else would you know when to stop pedaling if you happened to figure out how to work the thing on your own? The $39 a month is obviously money well spent.

Peloton draws you in with its TV commercials featuring good-looking, fit, young people pedaling a stationary bike to beat the band, sweating like crazy, and watching the TV set with the person on the screen telling them how to pedal.

Peloton is no one-trick pony, either. It'll soon begin shipping its next product: a $3,995 treadmill.

Peloton's treadmills are expensive because – you guessed it – they have large TVs attached. How would you know how to walk and run without the TV, the $39-a-month subscription, and the person on the screen?

If I've left you with the impression that Peloton is merely a company that sells exercise equipment with TV screens that require a $39-a-month subscription, I apologize...

Peloton is much more than that. The company's recent IPO filing contains a letter from CEO John Foley to prospective investors, which begins...

It is no secret that exercise makes us feel good. It's simple science: exercising creates endorphins and endorphins make us happy. On the most basic level, Peloton sells happiness.

I assume Foley wrote and published those words with a straight face. But it's a weird way to start a letter to prospective investors. And that's just part of Peloton's weirdness... In a CNBC interview recently, Foley proclaimed Peloton is "weirdly profitable."

I think he was trying to say that Peloton is on the cusp of making a profit, and that's weird because profitability isn't really a feature of the IPO landscape these days. But really, it is anybody's guess what he meant, given the following lines from the first item under "Risk Factors" in Peloton's recent filing (emphasis added)...

Peloton's revenue was $218 million three years ago and $915 million last year... yet losses are growing, not shrinking.

Maybe he's talking about the company's 42% gross profit, which is larger than Apple's (AAPL) most recent quarterly gross profit, at around 37%. Of course, Apple had an 18.5% net profit margin, after all expenses and taxes. Peloton lost about $200 million... and it doesn't expect to make a net profit anytime soon.

Peloton strikes me as the Tesla (TSLA) of exercise equipment...

There's more cachet than genuine benefit to owning one. And yet, I bet showing off your stationary bike won't feel nearly as good as flashing a Rolex, an Apple Watch, a Tiffany bracelet, or a fancy electric car.

To hear Peloton tell it, it's not the Tesla of exercise equipment. It's the Amazon (AMZN), Apple, FedEx (FDX), Facebook (FB), and much more... I'm not kidding. Its IPO contains the following slide... 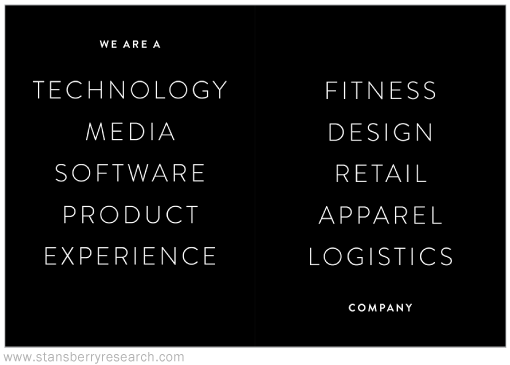 (You can check out Peloton's IPO filing right here.)

I can't imagine Peloton will exist five years from now. It does nothing that can't be imitated by larger, better-financed competitors. I don't wish the company ill, but I wouldn't touch the stock (on the long side, at least) or buy the product.

Peloton and other recent IPOs are typical of our era – unprofitable, early-stage companies...

They're able to go public mostly on the promise they'll continue to grow revenue at a torrid pace, eventually eclipsing their substantial expenses, resulting in profitability. (Peloton revenues have grown fourfold the last three years.)

They're nothing like the "FAANG" stocks – Facebook, Apple, Amazon, Netflix (NFLX), and Google parent Alphabet (GOOGL). Those cash-gushing mega-caps dominate their markets...

Facebook owns most of the social media market (including Instagram). Google owns the global search market. Facebook and Google have dominated online advertising. Apple shares the smartphone and tablet device markets with Samsung (but earns more than 70% of the profits). Netflix owns streaming (for now). Amazon owns online retail.

It recently published a report called "FAANGs: The sun has set on their days of dominance." The firm argues that these companies have entered an era characterized increasingly by maturing markets and rapidly rising competition.

And the competition no longer comes from small upstarts. They've swatted them away. Now it comes from smarter, bigger competitors... often another FAANG peer.

The Aoris report details the FAANGs' rising cost of maintaining dominance in their current core markets. For example, Netflix created the market for online streaming of movies and TV. It accounts for an astonishing 15% of all Internet traffic and will spend $15 billion on original content this year, roughly seven times what HBO spends. Netflix will spend another $3 billion on marketing, more than HBO will spend on programming.

Despite billions spent on original programming, 72% of Netflix's content is created by other studios. The six most popular shows on Netflix are all non-Netflix productions (The Office, Friends, Grey's Anatomy, NCIS, Criminal Minds, and Shameless).

Viewers like what they like and don't care how much you spend to get it to them... Netflix famously has spent $100 million to license Friends for just one more year, and that deal includes the possibility that NBCUniversal will make another $75 million a year if it wants to share Friends with Netflix once its own streaming service is up and running.

Disney (DIS), WarnerMedia (HBO's parent), NBCUniversal, and CBS (CBS) are all launching their own streaming services. Disney has already decided to pull all its content from Netflix. And the most popular show on Netflix, The Office, will move to NBCUniversal's streaming service in 2021.

Everybody thought Cisco Systems (CSCO) was the best business in the world in early 2000. It was in 10 of the top 10 mutual funds of the time. Pundits fell over themselves to praise its management, technology, and market dominance.

The company's stock peaked at $80 per share in March 2000 and bottomed out two years later south of $9 per share... a nearly 90% drop. Nobody could imagine it. They never saw it coming... the same way they can't imagine it happening to the FAANGs today.

None of this changes the cash-gushing profitability and market dominance of the FAANGs as a group today, but...

Even if the FAANGs aren't in big trouble, the market for capital – which has been extremely generous with the technology world the past few years – has begun demanding better financial performance than some of the big tech players can currently deliver. You can tell by all the convertible bond deals done over the past year by the likes of Snap (SNAP), Twitter (TWTR), Tesla, Square (SQ), Atlassian (TEAM), and Splunk (SPLK).

Companies issue convertible bonds so they can pay them back with stock instead of cash. Convertible bonds carry low interest rates and convert to equity at a higher stock price than at the time of issuance. The debt can be paid off with shares.

Convertible issuers are usually unable to borrow money at low rates, often due to a less-than-stellar financial condition. They issue convertibles in lieu of issuing higher-yielding "junk" bonds because they can't afford to get bogged down with big cash interest payments.

Convertible bond deals are easier to do than straight equity or debt offerings. They don't require a credit rating or a time-consuming, expensive road show (where the company pitches prospective investors in several locations). A convertible deal can be hammered out in a single day.

Capital market information provider Dealogic reports that the 15 largest convertible bond deals so far this year raised $17.9 billion total, compared with the $16.5 billion raised by the 15 biggest deals in all of 2018. The company says tech companies have been active this year, accounting for an estimated 43% of 2019 deals to date.

If you can't borrow at low rates near the top of a global bond bubble that has pushed $1 trillion in corporate debt into negative-yielding territory, you may soon have to face the fact that you aren't running a very good business. Maybe not right away... After all, the convertible deal you just did bought you some time. But soon... very soon...

P.S. While I believe we're closer to the end of this historic bull market than the beginning, it's a different story in gold... We're in the early stages of the precious metal's next great run. In Extreme Value, I recently shared all the details about a high-quality gold stock that could return as much as 20 times your money over the long run. Learn more here.