This Corner of the Market Could Boom, Thanks to the Recent Bust
By Brett Eversole
Monday, October 22, 2018

Unfortunately, one corner of the market was already falling before it happened. And the recent fall pushed that decline into overdrive.

Small-cap stocks peaked in late August. They're down double digits since then, with much of the fall happening in the last two weeks.

The recent downturn has spooked many investors. But history says hitting the "sell" button now would be a mistake. Small caps have fallen too far, too fast... And a rally is likely.

History says we could actually see double-digit gains over the next year.

Normally, it's a bad idea to fight the trend. But sometimes an investment falls too far, too fast. It becomes oversold, which makes a snapback likely.

When I say "oversold," I'm referring to the relative strength index ("RSI"). This simple measure compares an investment's recent gains against its recent losses.

The RSI is a great contrarian tool. It tells us if the recent move in an asset can continue, or if it's overdone. If something falls too far, too fast, it will fall to oversold levels. That happens when the RSI falls below 30. And it means a rally is likely.

U.S. small caps have only triggered an oversold extreme 1% of the time going back to 1990. But it just happened again a couple of weeks ago. Take a look... 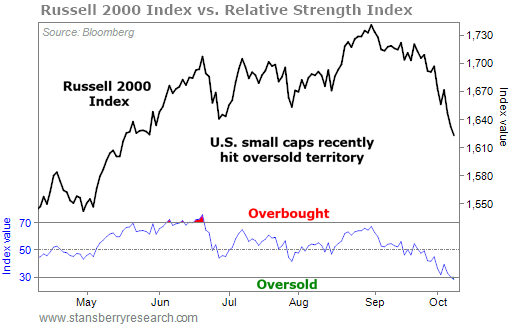 Small-cap stocks have been falling for a few weeks. They're down double digits. It doesn't look pretty...

Going back to 1990, we've seen that after U.S. small caps fell below and jumped back above oversold levels, they've tended to outperform over the next year. Take a look...

U.S. small caps have been a solid winner for nearly three decades... returning 9% a year on average. But buying after they hit oversold levels could have crushed that return.

Specifically, similar instances have led to 4% gains in three months, 7% gains in six months, and a solid 14% return over the next year. That's a big outperformance versus a boring buy-and-hold strategy.

One simple way to make the investment is the iShares Russell 2000 Fund (IWM). This fund tracks the Russell 2000 Index – the benchmark for the U.S. small caps.

It's normally smart to wait for the uptrend before investing. But small caps are coming out of massively oversold levels right now. That means the snapback in prices could be just around the corner.

History says that could lead to 14% gains over the next year. If you're interested, IWM is a simple way to make the trade.

P.S. My boss Steve Sjuggerud expects fireworks in the market over the next year. He believes a "Melt Up" will soon take over – sending the right investments up 100%... 200%... even 500%. That's why he's hosting a free event on Wednesday, October 24, to walk you through the details. He's even giving away the name and ticker symbol of a stock he believes could turn into a 10-bagger over the coming months. To join us, click here.

Ben Morris and Drew McConnell recently looked at what the RSI is saying about the broader market. As they explain, while the recent pullback in stocks scared a lot of investors, you might be surprised by what tends to happen next... Learn more here.

After the market's big sell-off at the beginning of the month, Brett examined what a string of consecutive down days could mean for stocks in the months ahead. Get the details here.