U.S. stocks hit another round of all-time highs at the end of September.

Then, last week, the bottom fell out.

This was a quick and sharp decline. Not only that, but U.S. stocks fell six days in a row through last Thursday. This type of fall over several consecutive days has only happened 1% of the time going back to 1950.

Importantly, history says this extreme isn't worth losing sleep over. In fact, the S&P 500 could jump 11% over the next year as a result.

A string of consecutive up or down days usually points to an acceleration in the overall trend. That means when we see lots of down days, it usually signals more pain ahead. But that's not always what happens.

In the case of U.S. stocks, history tells us something quite different...

A string of consecutive down days isn't a warning sign for more losses... Rather, it means a rally is likely.

You see, when the S&P 500 falls six or more consecutive days, it often goes on to crush the typical return for stocks in the months that follow.

Again, this string of down days ended last Thursday. It was a painful sell-off. Take a look... 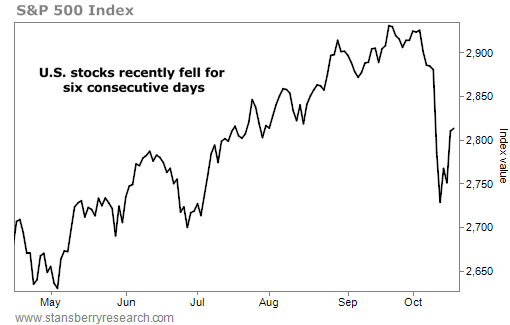 After months of moving higher, the market took a dive last week. But again, history says not to worry. The fall likely won't last long.

Since 1950, buying after strings of six consecutive down days would have led to profits a year later 76% of the time. The typical gain by then is a solid double-digit profit. Take a look...

U.S. stocks have been a fantastic long-term investment... returning roughly 8% a year (not including dividends) since 1950. But buying at times like right now led to much better returns.

Similar circumstances led to 3.5% gains in three months, 5% gains in six months, and a solid 11% gain over the next year.

These are impressive returns and solid outperformance. It's also worth noting that this 11% upside potential is for the broad market. As the "Melt Up" unfolds, certain stocks and sectors could soar dramatically higher.

So sure, I know the recent fall feels scary. But history says we shouldn't hit the panic button just yet. This is likely just another blip on the way to newer and higher highs. And as Steve said earlier this week, we know that a bit of volatility is normal in a Melt Up environment like today.

History says this recent sell-off isn't something to worry about. It's something to embrace. It could lead to double-digit profits over the next year... So stay long.

P.S. Steve says the Melt Up he has been predicting since 2015 is about to make a dramatic turn. And we plan to be with you every step of the way... showing you how to make the biggest potential profits as this bull market reaches its final innings. That's why we're hosting a free event on Wednesday, October 24. Tune in, and Steve will reveal everything you need to know... Click here to join us.

"Everyone knows that stocks have gone up for almost 10 years now – without a losing year," Steve writes. "So it would be crazy for stocks to be cheap today, right?" Get the details on this surprising fact about U.S. stocks right here.

Like Steve and Brett, Dr. David Eifrig sees more upside potential for stocks in the months ahead. Learn more here: The Top of the Market? Not Yet.

Market Notes
THIS 'PICKS AND SHOVELS' MILITARY SUPPLIER IS SOARING

Today, we’re checking in on a defense contractor that supplies the U.S. military…

As DailyWealth readers know, “picks and shovels” companies (which supply industries with vital products and services) often make safe and reliable investments. With geopolitical tensions on the rise, war remains a major industry today… And this company supplies America’s soldiers with the tools they need to communicate…

Defense contractor Harris (HRS) manufactures wireless gear and tactical equipment – such as radios, antennas, and night-vision binoculars. This company is among the top 20 defense contractors today… And its upcoming merger with L3 Technologies (LLL) will make the combined entity the sixth-largest defense contractor in the country. Added to this news, Harris just released top-notch quarterly results, reporting its highest revenue and earnings-per-share growth in eight years.

As you can see in today’s chart, Harris’ stock has been in a strong uptrend. The share price has nearly doubled over the past two years, and it recently hit a new multiyear high. For better or worse, supplying the war industry makes for big returns… 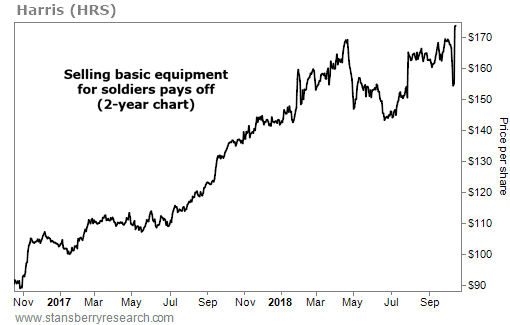