This Crypto Is Setting Up for Its Next Bull Market
By Eric Wade
Wednesday, May 20, 2020

Steve's note: We're seeing a lot of uncertainty in the market today. Times like these can lead to surprising investment opportunities... And that's exactly what my colleague Eric Wade says is coming for cryptocurrencies like bitcoin. These are volatile assets – but their upside potential is massive. So if you're thinking of getting into this space now, read on...

A big change is coming in the crypto market...

It's like an oncoming train that you can't see yet. There's a thrum in the air. And the rails are starting to vibrate.

Since August 2018, the crypto market has been in an accumulation phase. Institutional players like hedge funds and pension funds have been slowly buying crypto. We've seen dramatic sell-offs whenever uncertainty entered the market, but buyers have always stepped in – leading to some extraordinary rallies.

Now, it's time for the next big bull market in crypto.

Today, I'll show you why the pieces are falling into place for the next crypto rally. And I'll share the best way to position yourself right now...

We've seen two accumulation phases before – right before a bitcoin halving. That's when the number of new bitcoins entering circulation gets cut in half.

The most recent halving took place on May 11. This is a big deal. It has only happened twice before – in 2012 and 2016. And both times, supply shock sent bitcoin prices soaring.

As you can see in the chart below, after each past accumulation phase and halving, bitcoin's market cap went up by at least 10 times. Take a look... 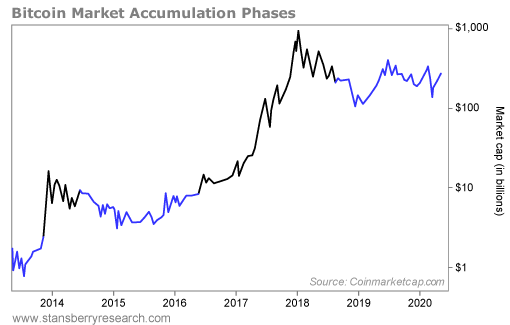 Each halving led to a bull market in bitcoin... and the entire crypto market.

But we have more reasons to be bullish on crypto today. Several tailwinds are about to drive prices higher...

First, we'll start to see the supply shock from the bitcoin halving. Second, governments around the world are printing money at unprecedented levels to keep their economies afloat (which is eroding faith in government currencies).

With the COVID-19 pandemic, folks are also moving toward digital cash to avoid coming into contact with paper money. And the upcoming launch of crypto exchange Bakkt's merchant network will soon allow people to pay with bitcoin at major retailers, including Starbucks.

The industry is also attracting an array of new buyers. Over the past few years, Visa, Facebook, JPMorgan Chase, Twitter's CEO Jack Dorsey, and legendary hedge-fund manager Paul Tudor Jones have all invested in or are working on crypto-related projects.

In other words, people are more interested in crypto than ever. The industry is on the edge of going mainstream.

When the next bull market begins, crypto's userbase will grow by 10 times or more... the industry's entire market cap will balloon into the trillions... and many cryptos could soar thousands of percent.

Like the U.S. dollar is the reserve currency for global trade, bitcoin is the "reserve cryptocurrency" for trading tokens, coins, and cryptocurrencies on exchanges around the world. It's also the largest by market cap. Many investors see bitcoin as a store of value, or "gold 2.0."

But bitcoin isn't just "digital gold." It has far bigger upside right now. Its supply can't be artificially increased because it's not issued by a central bank. In other words, bitcoin prices aren't set by a narrative, but by supply and demand... And that demand has come roaring back.

Plus, as we said... the latest halving is something that has only happened twice before. And both times, it sent bitcoin soaring.

So far, bitcoin is up 12% since the halving last week. And this event – along with the several catalysts we're seeing today – could send bitcoin soaring to $100,000 over the next two years.

That's why I recommend bitcoin be your single largest crypto holding.

Editor's note: Bitcoin isn't the only crypto that could soar in the coming years. If you'd like to know more, Eric just recorded a free Crypto Masterclass to help you develop your crypto "game plan" for 2020 and beyond. He answers the top questions about this game-changing technology... busts the myths wide open... and highlights some of the biggest opportunities in the space. View the Masterclass here to get started.

Bitcoin is part of the global economic system. It's beyond the control of any one country. And regardless of attempts to control or ban the crypto, bitcoin is strong enough to survive the threat of any government... Read more here: How Bitcoin Will Survive the U.S. Government.

Blockchain can be incredibly daunting to understand, let alone to buy or to use. That's why Eric explains everything you need to know about the inner workings of blockchain by breaking it down into easy steps... Learn more here: Become a Blockchain Expert in Less Than Four Minutes.

Market Notes
THIS HOT CYBERSECURITY COMPANY IS ROCKETING EVEN HIGHER

Today’s company provides security as the world works from home…

Due to the coronavirus outbreak, most offices are locked down, with employees ordered to work remotely. With everyone trying to collaborate through the Internet, it creates more vulnerabilities that cybercriminals can exploit. This company is winning big as its customers shore up their defenses…

Okta (OKTA) is a $20 billion cybersecurity company. Its sophisticated identity-management software carefully reviews whether someone trying to access a company’s network is an employee… or an intruder. Since the coronavirus began, Okta has seen certain types of cyberattacks jump by 667%. In that same time, usage of the company’s Okta Verify product increased by 80%.

OKTA shares now trade at more than 10 times their IPO price from early 2017, and they just hit a new all-time high. As remote work continues to be part of our lives, Okta will likely remain in high demand… 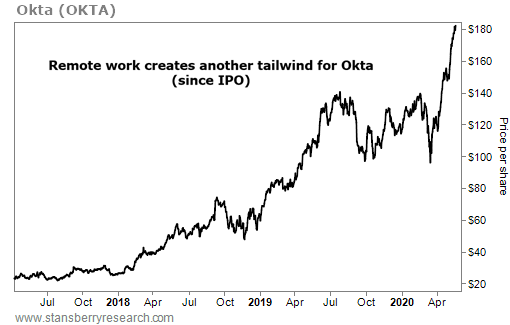