This Indicator Hit 2007 Crisis Levels â But You Shouldn't Sell Yet
By Chris Igou
Tuesday, January 28, 2020

After a fantastic start to the year, markets have fallen over the last week. Folks want to know if this is the big one.

The answer is, "Probably not." But that doesn't mean we shouldn't be watching important indicators closely.

One of the most useful economic gauges has flashed warning signs before the last three recessions. And today, it's hitting levels we haven't seen since the last crisis.

Here's the thing, though. While this indicator is near crisis levels, it's not giving us the "get out now" signal just yet...

This leading indicator is still in positive territory, as I'll show. And that means it's not time to hit the panic button on U.S. stocks today.

There are lots of ways to look at the health of the U.S. economy – including unemployment, housing starts, and consumer spending, just to name a few.

When several of these indicators start showing weakness, it can mean the economy is in danger of recession. And a looming recession is bad for stocks.

To see many of these indicators in a simple form, we can look at the Leading Economic Index ("LEI"). It's put together by the Conference Board, an independent research company that collects business and economic data.

The LEI weights 10 factors that are tied directly to the economy. If this group of indicators starts to weaken, the LEI falls. And that's an early warning sign.

Unfortunately, this is happening right now. Take a look... 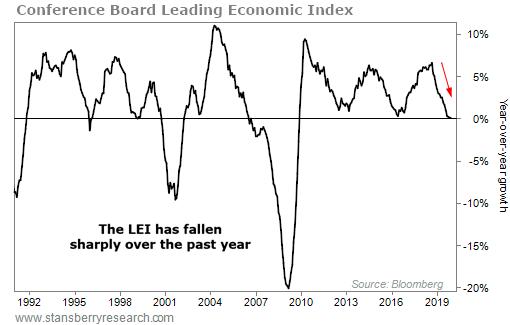 The chart shows the year-over-year change in the LEI. And as you can see, the growth rate has gone from around 5% in 2018 to roughly flat today.

This is the lowest reading we've seen since the financial crisis. But again, it doesn't spell the end for today's bull market.

The current level sits at 0.1% today... So we're still seeing a bit of growth. The concern will be when this reading turns negative.

Since 1960, buying after the LEI turns negative has led to losses in the S&P 500 over the next year. Take a look at the table below...

Over the long term, U.S. stocks return roughly 7% a year. But the broad market does much worse after this indicator turns negative.

Negative readings have led to 2% losses in the S&P 500 over six months. And it has lost roughly 9% over the next year.

Importantly, we aren't there yet. The LEI remains in positive territory. That means stocks still have room to run.

It might not feel that way after the losses we've seen in recent days. But this indicator says the economy is still doing well... And that means the market should continue higher.

"Many folks see this as a worrying sign of an imminent bear market," Chris writes. Most investors view a weakening manufacturing sector as a sign of impending doom for stocks. But this indicator points to another double-digit rise in the U.S. market... Read more here: Stocks Could Rally Double Digits Again in 2020.

"Most people know that this bull market is getting old," Vic Lederman says. Conventional wisdom says that means the end must be near. But history says that we could easily see the market soar higher before the boom times end. Get the full story here: 5,000 on the S&P Is Closer Than You Think.

Market Notes
A BUSINESS THAT THRIVES IN ANY KIND OF MARKET

Today, we’re highlighting the benefits of investing in utility stocks…

Longtime DailyWealth readers know utilities can be some of the safest investments out there. Whether the economy is booming or slumping, people will always need power, water, and gas in their homes. And many utilities also hold monopolies in their markets. Today’s company runs on this “shock proof” business model…

American Water Works (AWK) provides water services to more than 14 million customers across 46 states. It’s the largest publicly traded water utility company in the U.S. Plus, it also offers water distribution and wastewater collection for military bases across the country. By providing such a basic necessity, this company is able to make steady sales… In the most recent quarter, American Water reported sales of more than $1.01 billion, up 4% from the same quarter in 2018.

As you can see, shares of AWK are in a long-term uptrend. The stock has gained nearly 140% over the past five years, and it recently hit an all-time high. People will always need water in their homes – so American Water should continue to thrive… 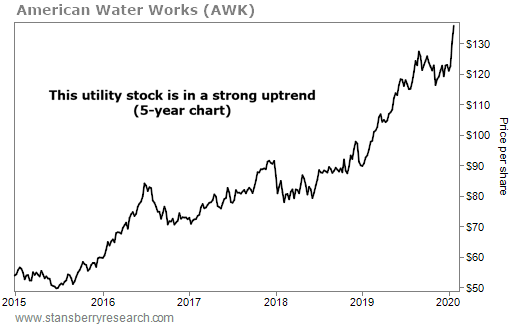