This Is What Capitulation Feels Like
By Sean Michael Cummings
Thursday, August 11, 2022

"I wish I knew enough to short," my friend said...

He explained that he was tired of a certain company dragging down his investment account. And he told me he hoped to start "short selling" – in other words, betting stocks would fall.

As you've probably guessed, this friend isn't a seasoned investor. But a short trading strategy is easy enough to understand. Instead of betting prices will go up, you're betting they'll go down. If you're right, you make money.

I pointed him to some short-selling resources and left it at that. But the exchange left a strong impression on me.

That may seem counterintuitive. But my friend's interest in short selling is a big hint that the bottom might be in. And it's not just him – we can see the same thing in several market signals today.

At our annual conference last October, my boss Steve Sjuggerud noticed something was wrong...

They filled the conference audience. One drove him in a cab to the airport. Another sat beside him on the flight home.

Everywhere he went, folks were eager to chat about cryptocurrency. It seemed like everyone, everywhere, thought digital currencies could only go up.

Steve saw it for what it was: a mania. A week later in our True Wealth Systems newsletter, he wrote, "This kind of extreme optimism scares me... It tends to be a big, fat warning sign."

He published that letter on November 4, 2021. Bitcoin peaked five days later. Today, it's down 65% since that high.

Steve nailed that call because of sentiment. When everyone sees never-ending upside in an asset... and it becomes a conversation piece everywhere you go... we see a flashing sign to get out.

These signals work on the flip side, too. In a bear market, they can tell us when a buying opportunity is coming. When everyone you know has given up on rising prices – like my friend – it's a sign there's nobody left to sell.

This is called capitulation. And when we see it, we know that's when the market can finally turn around.

This year's bear market has been brutal. But the S&P 500 Index has staged a double-digit rally off its low this June. Take a look... 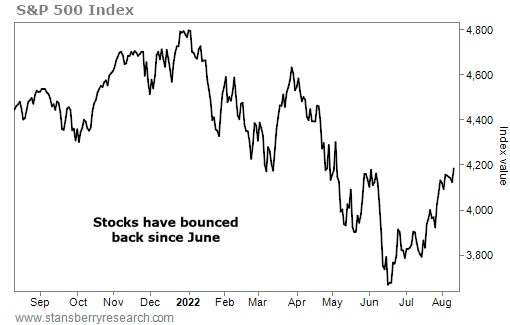 Stocks are making a comeback. But it seems like everyone has short selling and "head-fake rallies" on their minds. Today, negativity is running rampant...

Our friend Jason Goepfert of SentimenTrader.com can quantify it.

Recently, Jason scraped a news database compiled by Bloomberg to measure the market's mood. He found that mentions of a "bear market rally" were at a decade high in June.

That's a lot of skepticism... And it doesn't end there.

The University of Michigan Surveys of Consumers also revealed dismal consumer sentiment in July. Respondents were near record bearishness about the economy, labor, and personal finances.

Fear and suspicion are everywhere. It's the opposite of the crypto craze last November...

It may mean the worst is behind us.

I'm not recommending you buy stocks just yet. I'll be waiting for a definite uptrend before I tell folks to go long...

But I'm getting more and more confident that this rebound in stocks is the real deal. The next bull market is closer than most folks think.

Editor's note: This October, we're excited to be hosting our 20th Stansberry Research Conference. We'll be in person at a new location: the luxurious Encore Boston Harbor resort.

It's an incredible opportunity to get "boots on the ground" and see what's really happening in the financial world. We'll have an all-star line-up of special guests... Plus, you'll get a first look at the top ideas from our Stansberry Research editors – like Steve, Dan Ferris, Eric Wade, Dr. David Eifrig, and more.

It really pays to be there. And if you can't make it in person? Make sure you check out our livestream option while it's still available. Click here for more details.

"Once investors think the world is ending, you don't need things to turn all the way around to 'good' to make a lot of money," Chris Igou writes. In fact, we've seen this kind of pattern before – in major markets outside the U.S... Learn more here: The Biggest Gains Start at the Darkest Times.

"The valuation picture is on our side," Whitney Tilson says. High-growth tech companies have been expensive for years. But thanks to this bear market, investors have a brief window to get both growth and value in the tech stocks that have been punished unfairly... Read more here.