This 'New Song' Can Protect You in the Next Financial Crisis
By Dan Ferris
Friday, August 30, 2019

Lately, I've said gold is a "new song" investors ought to be singing today.

It's funny to call gold a new song, though. Humans have been using it in one form or another for more than 5,000 years (6,000 if you count electrum, a naturally occurring gold/silver alloy used in ancient Egypt).

Here in the present, gold has rallied sharply since July, when it traded for as little as $1,383 an ounce. The metal is now hitting new six-year highs.

It's no secret why many traders and investors started bidding gold prices higher... They've been trying to front-run the Fed.

A lot of investors anticipated that the Federal Reserve would cut interest rates at the July Federal Open Market Committee meeting. And according to CME Group, investors overwhelmingly expect another cut in September.

I'm enthusiastic about gold as well... but for opposite reasons.

If that surprises you, stay with me. I hope you'll see why you should be singing this new song today.

These days, this dynamic is viewed as an iron law of finance. The old saying, "Don't fight the Fed," rings in the ears of many investors. (Too many, I'd say.) So when the Fed makes cuts, or even talks about cutting rates, folks buy.

It strikes me as profound that, whatever you're expected to do when falling interest rates are on the table, getting rid of dollars seems to be the No. 1 priority... another reason this whole deal points to strong performance in gold.

Now, personally, I'm not really in the "don't fight the Fed" camp...

I understand why others are there. It's a view you've likely been hearing lately. My colleagues have spent some time writing about it here in DailyWealth.

But my obsession with gold is rooted in the opposite viewpoint. You could say I'm fighting the Fed. 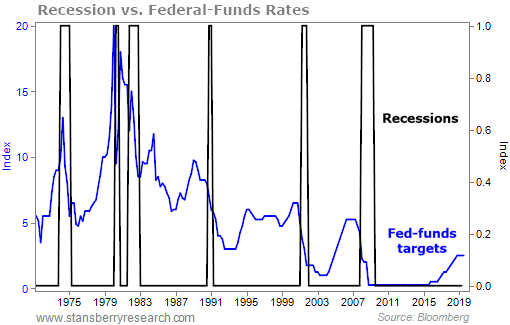 You don't need a visual to know how poorly stocks perform during a recession. Just look at the above chart, and think about it. You probably remember those last two recessions and the corresponding bear markets quite well.

The upshot of this chart is that, when the Fed starts cutting rates, watch out. It means the Fed smells trouble.

It makes you wonder where in the world this whole "don't fight the Fed" idea came from in the first place. It seems like the smart bet would be against monetary policy saving you and me from declining asset prices.

In fact, I'll go one step further: If you look at how rate cuts started right before the last few recessions, the proper adage for traders and investors seems to be, "Fade the Fed." Bet against its ability to do anything but make life more difficult for savers and investors.

So where does gold fit into this?

Last year, at our annual Las Vegas conference, I presented the audience with a few charts that showed how gold prices (measured by the Philadelphia Gold and Silver Index) have behaved in the last few bear markets compared with the S&P 500 Index... 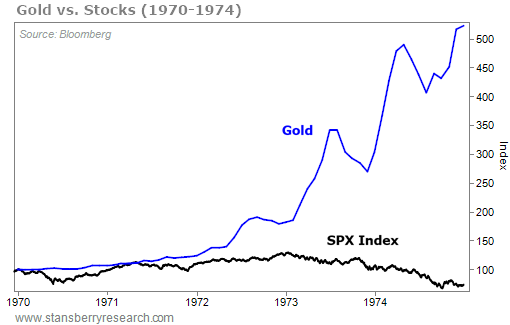 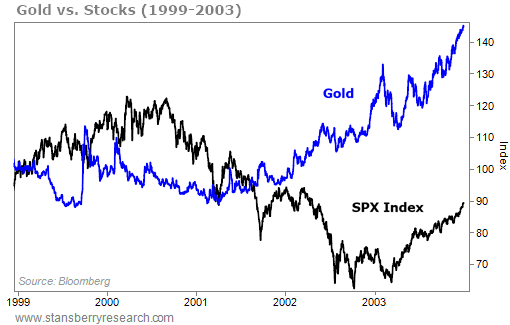 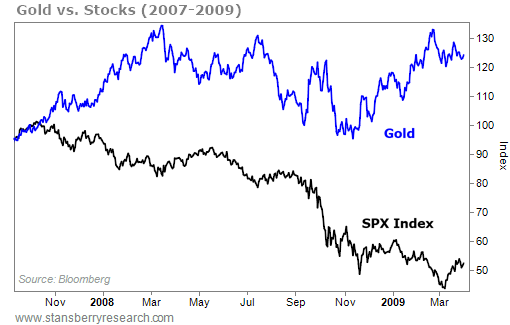 It's no great coincidence that gold holds up well when equity prices are in free fall and the Fed is pumping out liquidity to beat the band. It is and ought to be as regular as the seasons (given the existence of a Federal Reserve, at least).

One reason gold works so well is what trader/flâneur Nassim Taleb calls the "Lindy effect"...

The Lindy effect – which for convoluted reasons takes its name from New York's famous Lindy's deli – says that for nonperishable items, every additional day of existence might imply a longer life expectancy.

Think if it this way: If a practice or product has been around for X number of years, it'll be around for another X years. For example, if a book has been published for 200 years, it's likely it'll still be published 200 years from now.

I was relieved to discover the Lindy effect a few years ago (in Taleb's book, Antifragile). When I was a young music student in the 1980s, I worried that someday the world might lose the music of Beethoven or Bach. But Bach died 269 years ago, and Beethoven 192 years ago. We're still listening to their music. So I don't worry anymore. With every day that passes, that's another day tacked onto their likely longevity.

Not everything Lindy is good. For example, the practice of bloodletting was around for 3,000 years. At the 1,500-year mark, you could have said bloodletting was Lindy, and you'd have been right. Fortunately, we moved past bloodletting, but it took another 1,500 years.

Gold doesn't treat you like vampire food, and its value has been recognized for 5,000 years. For good reason, too. By the Lindy effect, it'll be around – and used much the same way we use it today – for another 5,000 years or more for the same reason. It works.

Putting it all together... Stocks are way up after a 10-year bull market. They're expensive. Global bonds are in an enormous bubble, with even some junk bonds trading at negative yields. And the Fed's easing has often correlated with recessions and bear markets over the last several years.

I could say that gold is a good bet today. But it's more accurate to say I don't understand anyone not owning gold right now. I don't understand how you can look at stock and bond markets – and the insanity that is monetary policy – and come away without some shiny objects in your portfolio.

Maybe you think I'm too much of a worrywart...

I suspect if the Fed does cut rates in September, and stocks and bonds rise as investors take the bait, you'll look back on this essay and say, "Well, Dan, you got that one way wrong."

Not so fast. I'm looking out years... not weeks or months. This isn't a viewpoint that I'll abandon until enough time has gone by to prove it totally wrong.

Fortunately, no matter what happens in the next few months or years, owning gold and buying great businesses when they're undervalued are good ideas over the long term.

And I think a bet on higher gold prices over the next few years – maybe longer – is a prudent one.

Editor's note: To make the biggest profits when gold is soaring, you want to own high-quality gold stocks. And nobody is better at finding those opportunities than our colleague John Doody. Today, he believes the precious metal is on its way to $2,500 an ounce... or more. In fact, he's guaranteeing that he can help you at least triple your money on one of his top gold ideas, starting now. You can find more details right here.

"Another precious metal has played catch-up with gold," Bill Shaw writes. "And while I expect the gold boom to continue, we could see more outperformance from here." Get the full story on a the metal that could be poised for bigger upside ahead right here.

"When the world's most influential central banks all plan to make major policy changes, we have to listen," Ben Morris writes. Changes like these don't happen often... and one shift has major implications for precious metals in the months ahead. Learn more here.

The headlines are filled with tech companies that offer the potential for explosive gains… but whose stocks may crash to zero before they can figure out how to turn a profit. All the while, some companies will keep doing the same old thing… year after year… and their stock price climb. Take a look at today’s example…

U.S. Foods (USFD) is a $9 billion food distributor. It works with 5,000 suppliers to provide fresh, frozen, and packaged foods to its 250,000 commercial and institutional customers – mostly restaurants, hospitals, and hotels. It’s not innovative. It’s not exciting. But it works. The company’s sales hit $6.4 billion in the most recent quarter, up 5% year over year.

This stock only began trading in 2016, and it’s had some ups and downs. Still, USFD has returned about 25% over the past year, handily beating the market over the same stretch. And shares recently hit new 52-week highs. It’s a reminder that “boring” businesses don’t need excitement to thrive… 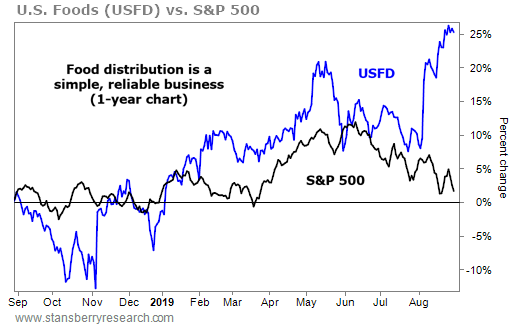