Multiple breakouts like this rarely happen at the same time...

In the past month, we saw new highs in stocks, bonds, and gold. And if you're like most investors, this probably has you puzzled.

Stocks and bonds tend to move opposite each other, after all. And gold is always a wild card. Sometimes it moves higher when stocks fall, and sometimes it doesn't.

So, to have a situation like this... with all three hitting new highs together... is darn rare. It's also a good sign for all three assets – and for stocks in particular.

It's true that when you find a market in a strong uptrend, it often goes on to make even higher highs. That's the power of what investors call "trend following."

Still, when you see multiple assets break out, you need to further examine what's going on. And that's the case today, as gold, bonds, and the Nasdaq all hit new 12-month highs last month.

This is not a common occurrence. You'll usually see bonds rally while stocks fall... or gold jump higher as bonds go nowhere.

Rarely do gold, bonds, and stocks all break out to new highs at the same time. These are very different asset classes, after all.

Today is different, though. These three assets recently broke out together. And the synchronized move led to new highs for each one in July. Take a look... 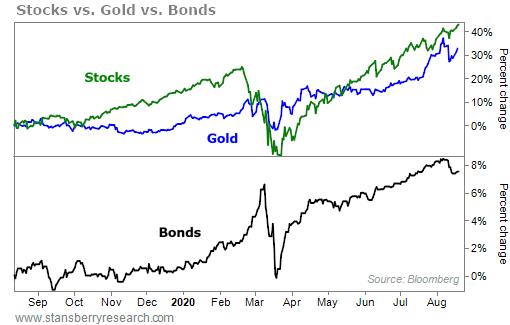 After the brutal collapse in March, gold, stocks, and bonds have come roaring back. It has been a nearly one-way move higher over the last four months.

We've only seen this happen nine other times since 1990. So again, this kind of event is unusual.

Investors who bought these assets in recent months have likely made solid gains. But the question we want to answer today is: what happens after an extreme like this?

Since 1990, we've seen mostly positive returns for all three asset classes in the year following these extremes. Just take a look at the table below... 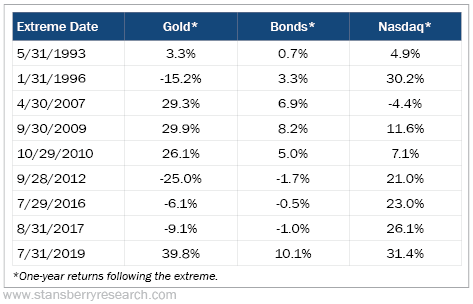 Let's break down this return table by asset...

Gold's one-year return after similar extremes was up five out of the previous nine times. The winners averaged out to 25.7%. Meanwhile, gold's losses following similar extremes were mostly small... outside of the one 25% loser in 2012. The average loser was down 13.9% over the next year.

For bonds, the overall winners-to-losers ratio was a little bit better. Six out of the nine previous extremes led to higher bond prices a year later... with the biggest winner being 10.1%. The losers were all less than 2%.

But if there's a clear winner following this extreme, it's stocks. Eight out of the previous nine extremes led to winning trades in the Nasdaq over the next year.

We are seeing big breakouts in these asset classes. And it's rare to see that happen for all three at the same time.

Overall, it's a relatively positive sign for gold and bonds. But the biggest winner by far is stocks. And with the uptrend in place, this is one more reason to be bullish today.

Even though the coronavirus is still around today, we're seeing positive signs piling up in the stock market. You might have trouble believing it, but the market is giving us signals that U.S. stocks have major upside potential over the next year... Read more here: What to Make of the Market's Best Quarter in a Decade.

Despite the extraordinary rebound in stocks, there is still uncertainty ahead. But being cautious doesn't mean you have to let fear keep you out of the markets... Get the full story right here: Buffett Is Right: It's a 'Long-Term Investors Only' Market.

Regular readers know Steve is bullish on housing today. There’s a shortage of homes… and low mortgage rates are tempting even more buyers into the market. When COVID-19 struck the U.S. earlier this year, the market feared this trend was over. Today’s company shows the market was dead wrong…

D.R. Horton (DHI) is a $25 billion homebuilder. It builds more homes in the U.S. than any competitor. In the most recent quarter, it sold 21,519 homes, up 38% year over year… And its backlog (houses it has sold before they’re built) grew 41% to 23,205. After what D.R. Horton called “a sudden, temporary disruption” from mid-March through April… customers were already rushing back in May.

After coronavirus fears cut DHI shares in half early this year, the stock has surged more than 150% to new all-time highs. Folks still need homes, and low mortgage rates make it easier for people to afford them. As this trend continues, homebuilders will keep reaping the rewards… 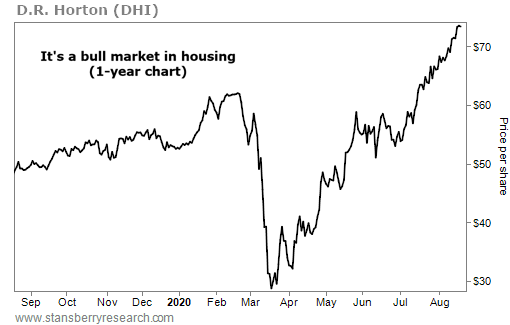