Most investors thought retail was dead at the start of the year... Then, the pandemic dealt what looked like the final blow.

After all, the worst thing you can do for a struggling brick-and-mortar store is force folks to stay home and order more stuff online. But that's exactly what the retail industry faced this year.

Retail isn't dead yet, though. And today, I'll share a "dog" of a stock that's starting to wake up...

The stock is down roughly 70% over the past five years. It took a hard hit from the coronavirus as well, falling more than 25% this year alone.

But history shows us that this poor performance could be coming to an end... And a 34% rally could be underway.

Under Armour (UAA) is a premier sports-equipment retailer. It made a name for itself by reinventing athletic apparel and footwear.

Importantly, the company's stock has been crawling back from its May lows. And it recently staged an important breakout.

The stock rallied seven days in a row last month. That's a rare feat that points to more gains ahead.

You see, a string of consecutive up-days is like a bright green light. It's a signal that an investment is picking up steam... It means the uptrend is strengthening.

Under Armour is no exception. Since 2005, similar instances have led to winning trades in this stock 82% of the time over the next year. And they can lead to big outperformance, too.

The company is coming off one of those hot streaks right now. Again, the stock rallied seven consecutive days last month – and it has continued higher since. Take a look... 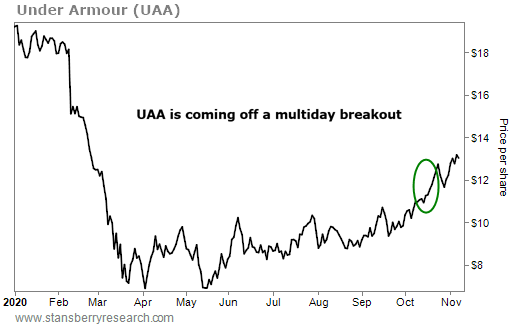 The chart shows the collapse in the stock earlier this year. But you can also see Under Armour is bouncing back strong. And the stock is coming off a breakout run.

Now, Under Armour has been a poor performer over the last five years... But its long-term track record is fantastic. The stock has returned about 15% in a typical year since 2005.

And buying after this kind of move higher often leads to even bigger gains. Similar instances have led to 34% gains over the following year... more than double the stock's typical one-year return.

If history is any indication, Under Armour's shares could soar in the coming year.

Of course, that's a major contrarian bet. This is a struggling company in a struggling industry. And the headwinds for retail may not be over yet.

But history is clear on this one. The trend is moving higher... and it's strengthening. That makes this a stock you should consider now.

"We're starting to see an uptick in key air traffic metrics," Vic Lederman writes. It's no secret that the airline industry is taking a serious beating lately. But two factors point to a potential turnaround in the future... Get the full story here: How to Spot a 'Secret Recovery.'

Investors are scared right now. But this massive fear can't last forever. And with this trend reaching a turning point, now is a great time to position yourself for major upside potential... Read more here: Take Advantage of This Reversal and Send Your Portfolio Soaring.

Today, we’re checking in on a company that turns our ongoing need for technology into profits…

Our favorite electronic devices all rely on tiny chips for power and connectivity. With a pandemic-driven surge in demand for things like laptops, desktop computers, and other home network equipment, these semiconductors are more crucial than ever before. And that’s good news for today’s company…

Texas Instruments (TXN) is a $150 billion semiconductor manufacturer. Its chips power products in the automotive, communications, and industrial sectors, among others. And the company is getting a boost as folks look for ways to stay connected… Texas Instruments recently reported 18% sales growth from the previous quarter. CEO Rich Templeton pointed to a rebound in automotive demand and growing demand for personal electronics as key drivers behind the strong sales.

As you can see in today’s chart, TXN shares have been in a steady uptrend since bottoming earlier this year. The stock is up 75% from its March low, and it just hit a new all-time high. As long as the world continues to run on electronics, this stock should keep rising from here… 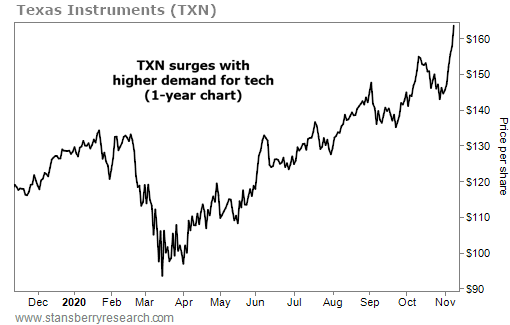