This Stock Market Decline Has a Silver Lining
By Brett Eversole
Tuesday, May 24, 2022

The stock market is easily in its worst shape since the COVID-19 crash...

Stocks are in freefall. The S&P 500 Index is now 18% off its highs and is quickly approaching a bear market. And it ticked another negative box to start May.

The market hit its first new 52-week low since March 2020. That's a sure sign that the trend is down. But there's some good news amid the losses.

History shows us that this won't necessarily lead to a further drop. And it will almost certainly allow for major outperformance in the years ahead.

Nobody likes to lose money in the markets. It hurts to watch your balance decline. And it's not just because of the losses... It's also because of the unknown – being unsure of when things will turn back around.

Sentiment is negative, given what has happened this year. But if you're inclined to give up on the stock market entirely, that might not be the best move... especially if you don't need your investment dollars for a few years.

You see, history shows us that declining prices aren't always bad. Instead, when stocks hit a new 52-week low, it often sets us up for future gains. 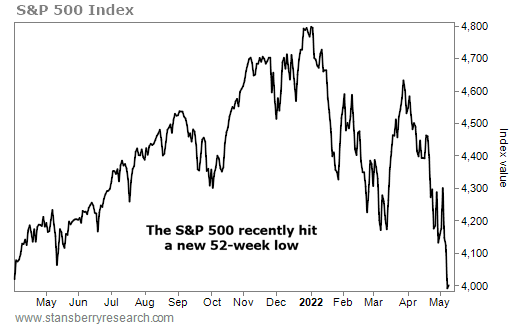 Again, the trend is down. We're darn close to an official bear market. And no one knows for sure when the bleeding will stop.

That's scary... But you shouldn't give up. New 52-week lows are rare – they've happened less than 1% of the time since 1950. But they shouldn't send you running for the hills.

Instead, stocks tend to perform about average in the short term following similar setups. And if you have a longer time horizon, outperformance is near certain. Take a look...

Surprisingly, we've only seen 23 new 52-week lows over this 72-year period. Even more surprising, stocks don't tend to keep crashing after they occur.

In fact, they typically outperform over the next six months – and only slightly underperform in the next year.

Things get much better in the long term, too. The typical two-year return for U.S. stocks is 16.4%. But that number balloons to 24% after these types of extremes. And the three-year return grows from 25.6% to 31.2%.

This is what we should expect from here... Falling prices are setting us up for future gains. While it doesn't make today's pain any easier, it's a wise perspective to keep in mind during difficult times.

Most investors have missed this setup. They're selling when they should be sitting tight. But you don't have to make the same mistake yourself.

Of course, you should wait for the trend to move in our favor before diving back into any speculative trades. But if you have long-term stock holdings, now is not the time to sell.

"When bulls disappear, stocks rally," Brett says. Many investors are pulling their money to the sidelines right now due to rampant market volatility. And this is creating the perfect chance for us to make a contrarian play when the trend reverses... Learn more here: Stock Market Bulls Have Disappeared.

"Falling for investor fear right now is a bad call," Chris Igou writes. With folks leaving stocks in droves, the market is in a downtrend today. But if we follow the crowd and let fear drive us out of the market, we'll miss out on all the upside... Read more here: Investor Fear Points to More Upside in Stocks.

Today’s company is losing its footing in this uncertain economy…

DailyWealth readers know we count on several kinds of businesses to tell us about consumer sentiment. When folks are spending money, it’s a good sign for the economy… But as inflation and pandemic disruptions continue, consumers have less purchasing power today. One company shows us that this economy is tough on families…

Carter’s (CRI) is a $3 billion children’s clothing retailer. It operates nearly 1,000 company-owned stores and an e-commerce site. But parents today have a lot of worries, including rising prices and, more recently, a national baby-formula shortage. And fewer folks have been visiting this retailer… Over the last year, Carter’s has closed a net total of 67 stores due to lagging in-person sales. And in its first quarter, sales were down 1% compared with last year, while net income fell 21% to $67.9 million.

CRI shares have been chopping sideways for some time. They’ve now fallen more than 30% since their most recent high and just hit a new 52-week low. As cash-strapped parents cut back on spending, retailers like Carter’s will suffer… 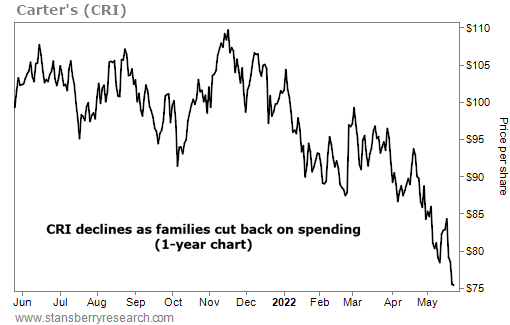