This signal has flashed before every market correction over the past decade.

It's a real-money indicator... It gives us an inside look at what a specific group of investors is doing with their money.

When this group's stock allocations are high, it can be a warning sign in the short term.

Today, allocation to stocks is at the highest level since 2017. We've only seen multiyear extremes like this a handful of times over the last decade. And each time was a warning for the S&P 500 Index.

The indicator I'm talking about is the American Association of Individual Investors ("AAII") Asset Allocation Survey.

It's a monthly poll that asks AAII members where they're putting their money. There are three choices... stocks, bonds, or cash.

When the majority of those surveyed answer "stocks," that indicates extreme exposure to the market. And it means a correction could be on the way, based on history.

The most recent survey came in at 71% for stocks. That number has only been higher one time in the past decade... And that was in December 2017, when it hit 72%.

Importantly, multiyear highs in stock allocations have led to short-term corrections in the S&P 500. Take the December 2017 reading, for example... 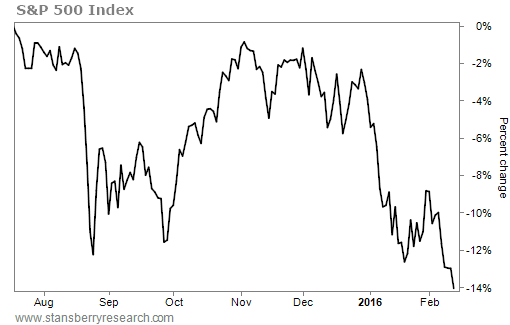 The market fell for months before bottoming out in February 2016. It was a brutal correction.

Lastly, we saw another extreme in January 2011. Stock allocations were in the upper-60% range – their highest level since late 2009. Individual investors were eager to own stocks. The S&P 500 peaked in April 2011... and fell 19% by early October.

Now, we're only going off of these three extremes. So that means our sample size is small. But it's still a warning sign worth noting when we see high allocations to stocks.

Don't panic, though. This isn't a "sell everything" indicator. The uptrend is still in place. And until that changes, you want to own stocks. Going forward, you simply need to have a plan ready in case of a pullback.

That means it's time to think about trailing stops, if you haven't already. Set them for the stocks you hold... And sell when you hit them. That discipline will save you no matter happens next.

The investing world never guarantees a "sure thing." Your best ideas can go from life-changing gains to portfolio-crushing losses. Make sure you protect your downside with this simple strategy... Read more here: The Secret to Taking Profits Instead of a 70%-Plus Loss.

"It's too easy to fall in love with your stocks in times like these," Steve says. And if you're not careful, that can lead to major losses when the Melt Down arrives. That's why you need to have a strategy in place to protect your gains... Learn more here: What to Do When You Hit a Stop.