It doesn't matter what happened last year or what could happen next year...

For professional traders, the only time frame that matters is January 1 to December 31. You have 250 trading days to perform.

It's a tough business...

December usually marks an exciting period because traders are either aggressively chasing performance or, on the opposite side of the spectrum, they are drastically reducing risk into the end of the year.

This back-and-forth between aggressive and risk-averse behavior creates a lot of activity – and a lot of opportunity to close out the year.

As we step into December, I'm going to show you two tech-focused parts of the market that I'm watching right now... and some of the signals I'm using to plan my trades from here.

Since early September, I've been watching big technology companies like Microsoft (MSFT) trade in a sideways consolidation pattern. I believe this is a big correction that could end soon.

Take a look at the chart below... 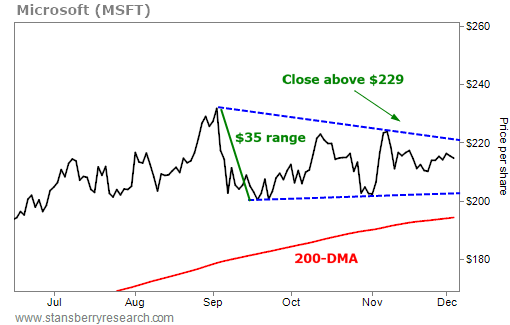 You may not be familiar with technical analysis. But this is a simple idea. The blue lines show the pattern of the correction since September... trading within a $35 price range.

A couple things could happen from here. The bullish scenario is that the most recent dips marked a low near $210 and MSFT is ready to rally. A close above $229 or $230 – right around the recent high – will signal that the stock is out of this correction.

If that happens, the stock should keep rising to at least $265. I calculated this target by using basic technical analysis – taking the widest part of this correction range ($35) and adding that to the breakout level of $230.

If there is more downside and the lower level of this corrective pattern in blue breaks below $200, this will cause a lot of sell stops to trigger... But this will also create oversold conditions. When too many traders are selling at once, it's usually a sign that a reversal is coming.

We can expect that floor to form around MSFT's 200-day moving average ("200-DMA"), marked on the chart above in red. This is simply the measure of a stock's long-term trend. And in this case, it's right around $190 – which means $190 is a level to buy for at least a short-term bounce.

Either outcome should lead to a great opportunity to get in. Whether we get a breakout or a breakdown in the weeks ahead, I'm looking for spots to open trades in MSFT.

I recently showed my Ten Stock Trader readers some important levels in this stock. Take a look at the strong rally below... 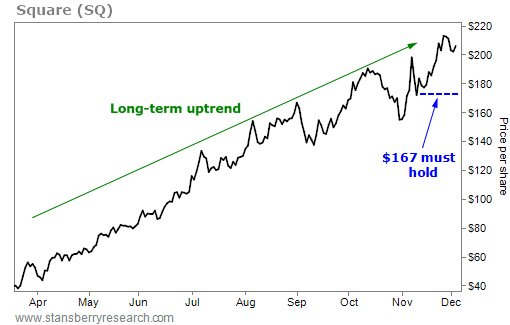 Much of this long-term uptrend in green (not all, but some) is due to Square's connection with bitcoin. The company has invested in the cryptocurrency recently. And as of this summer, its customers can even buy bitcoin through the Square platform.

I don't get as excited ("Bitcoin is going to $1,000,000!") or as apocalyptic ("Bitcoin is a Ponzi scheme that's going to zero!") as some people when it comes to bitcoin and cryptocurrencies... It's just another market to trade.

Square's epic rise was tough to trade for a while, as the move was straight up. But the stock recently experienced some volatility. So we finally have some technical-analysis levels to work with.

The key level going forward will be $167. If that level can hold, then the uptrend will remain. Plus, with a recent close above $205, Square could rise as high as $280 in the months to come... There could be volatility in this stock before that happens, but I view that as an opportunity. I'll look to buy corrections that hold the $167 level.

These are just two of the stocks that I'm watching right now. With the signals I've shown you today, traders have plenty to focus on – and some exciting trading setups.

We should see even more chances to profit as December continues. Volatility may pop back up soon. And for traders, volatility equals opportunity.

Editor's note: Greg predicts something big is coming on December 23. This event could either wipe you out, or propel you to spectacular gains – if you know how to take advantage of it. The difference has to do with a Stansberry trading secret we almost never publicize... Click here to learn more.

"The technology sector has led the way up since the March market low," Greg writes. With everyone working from home since the pandemic struck, the same few stocks have been touted as the big winners. But they all rely on this sub-sector to keep their businesses running... Read more here: This Sector Is Signaling the Tech Rally Isn't Over Yet.

"You might think that the rally has to cool down soon," Chris Igou says. After a historic crash earlier this year, markets are soaring to new all-time highs. And history says that buying after new highs is a great idea today... Get the full story here: Dow: Next Stop 40,000.

As COVID-19 cases spike and lockdowns and restrictions tighten, folks need ways to entertain themselves without leaving the house. Stocks like gardening business Scotts Miracle-Gro (SMG) and streaming giant Netflix (NFLX) have gotten boosts as a result. And today’s company is providing another way for people to have fun safely at home…

Take-Two Interactive Software (TTWO) is a $21 billion video-game maker. Its popular titles include series like Borderlands, Bioshock, and Grand Theft Auto. And its sales are jumping as folks play games during the pandemic… Its net bookings (which measures digital and physical sales) rose slightly year over year to $957.5 million in the latest quarter. And Take-Two has raised its outlook for fiscal year 2021, too – it now expects record net bookings of more than $3 billion.

As you can see, Take-Two’s shares have trended higher over the past year – up nearly 48%. They recently hit a new all-time high. And as folks turn to video games for safe entertainment this winter, that uptrend should continue… 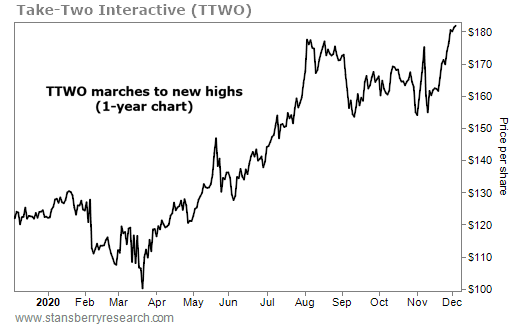