Your goal as an investor is simple... to make money.

What's the easiest way to do that? It's become an old cliché... "Buy low and sell high."

It sounds routine... like a no-nonsense formula anyone can follow. But investing doesn't usually work that way.

You see, lows can always go on to make even lower lows. And new highs can lead to even higher highs.

Your best chance to make major profits is to wait for the uptrend before buying. You want to take opportunities to "buy high and sell higher."

That's the opportunity we have in U.S. stocks right now. The market started 2019 off with a bang. The Dow Jones Industrial Average is up 9% so far this year.

Even more, the index rose for nine straight weeks... something that hasn't happened since 1995.

Not at all. History says we should see better-than-normal performance from stocks going forward. And double-digit gains are likely from here.

Buying after a major rally is counterintuitive. It feels uncomfortable, even dangerous. But history says that your "gut feeling" on this is dead wrong.

We want to buy after a rally has started. It means the trend is in our favor. And history shows that more gains are likely when that's the case.

Again, the Dow recently went up for nine straight weeks. We've only seen similar rallies eight other times since 1949.

That's roughly one opportunity every nine years. And six out of those eight previous occurrences led to profits over the year that followed.

You can see the recent rally in the chart below. Take a look... 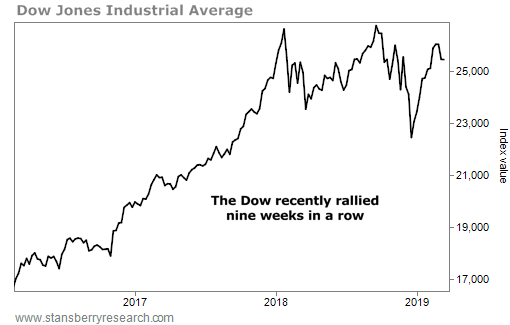 Surprisingly, history says this rally still has plenty of upside potential. Similar multiweek rallies have led to major outperformance over the next year. Check it out...

Since 1949, owning U.S. stocks returned a little more than 7% a year. But buying after several straight weeks of gains tended to lead to better returns.

Similar multiweek rallies typically returned 4% gains in three months, 7% gains in six months, and solid 11% gains over the next year.

These aren't blockbuster returns... But they're solid outperformance. And they tell us the recent rally is likely just the beginning. We should expect more gains throughout 2019.

As you know, we're predicting a spectacular Melt Up in the months ahead as investors flood back into stocks. While tech and biotech stocks should soar the most, this nine-day run shows even the "fuddy duddy" stocks of the Dow are likely to outperform.

So if you are still standing on the sidelines, it's time to get into U.S. stocks. Double-digit gains are possible from here.

"The longest expansion in American history can't go on any longer, can it?" Steve writes. "It can..." Instead of looking at the lifespan of the market's current run, investors need to assess where we stand right now. Learn more here: The Stock Boom Is Now 10 Years Old... What Next?

"A recent trigger means billions of dollars will soon go 'long' stocks," C. Scott Garliss writes. "And this huge flow of cash should ensure the recent rally in stocks isn't over yet." Get the full details on a technical indicator that could point to more gains in the months ahead right here.

It’s no secret that utility stocks can make great long-term investments. These companies provide services everyone needs – like water, gas, and electricity. And that means steady customers are guaranteed. Today’s company is a perfect example…

FirstEnergy (FE) provides electricity to homeowners throughout the Midwest and Mid-Atlantic region. The $22 billion utility giant owns more than 24,000 miles of transmission lines, which it uses to serve more than 6 million customers. All those people rely on FirstEnergy to keep the lights on – and that’s a steady source of sales for the company… FirstEnergy reported $11.3 billion in revenue last year, up from $10.9 billion in 2017.

As you can see in today’s chart, FE shares are trending higher. The stock is up about 25% over the past year and recently hit a new multiyear high. It’s more proof that utility stocks can make safe, long-term investments… 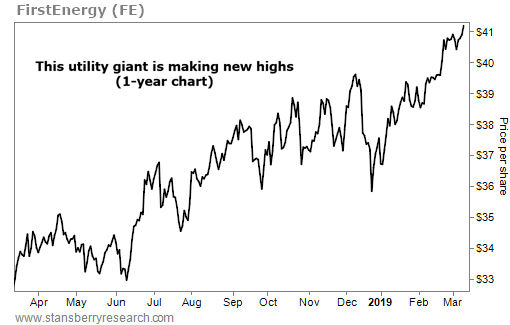