Steve's note: Longtime readers may remember our friend Jeff Brown, from our corporate affiliate Legacy Research. Jeff is an expert in tech investing. His readers have had the chance to profit from some of today's most exciting industries: 5G networks, artificial intelligence, precision medicine, and more. While I'm no expert in the specific "revolution" he'll discuss today, he's urging folks to get in now. Read on to hear what he has to say...

It was out of complete necessity. Computers around the world needed a way to communicate.

Throughout the 1970s and '80s, innovators developed the protocols that serve as the foundation for every e-mail, text message, file transfer, and phone call.

These were the building blocks of Web 1.0... the beginnings of the World Wide Web. And the "Internet" back then, if we could call it that, was largely decentralized. There were no choke points or centralized organizations controlling it.

As time went on, some of the largest, most profitable companies of our time were built on the backs of these invaluable protocols... Think of Netflix (NFLX), Facebook (FB), Google (GOOGL), and Amazon (AMZN).

Taken together, these companies helped to create what we know today as the modern Internet – "Web 2.0."

And what do all these companies have in common? They all created applications that run on top of these fundamental protocols underlying the modern Internet. The technology companies that built these applications captured all that value.

And these companies' executives and early investors made life-changing sums... generational wealth.

So today, I'd like to tell you about the next big shift we're seeing... the next big opportunity for building wealth – Web 3.0.

Something strange happened after the Internet bubble popped in the late '90s... Companies that emerged from the rubble continued to build their businesses.

Only this time, the focus wasn't decentralization and the development of open protocols that everyone could use freely. It was all about proprietary technology, centralized control, money, and yes... power.

Companies hid behind catch phrases like "don't be evil"... all while gaining as much control over the Internet as they could. The financial rewards were simply too massive. The multimillionaires of the dot-com era gave way to modern billionaires.

What does this all mean?

We've seen a massive shift toward giant corporations hosting cloud-based services in a highly centralized way. This structure is the antithesis of the foundations of the Internet.

The Internet was meant to be decentralized – open, free, and resistant to censorship. It was a place where anyone and everyone could share their thoughts and opinions.

The Internet was also meant to democratize economic power and influence. The goal was to provide everyone unfettered access to information.

But the opposite has happened.

Power and influence have gravitated toward a few superpowered tech giants. Want to search for someone? Try Facebook. Need to search for information? Google it. In need of a product? Search on Amazon.

Facebook and Google surveil and collect our data daily whether we know it or not. It's nearly impossible to avoid. And these companies monetize that information daily without any benefit to us consumers.

These "faults" of the second-generation Internet are the catalyst for the third generation – or Web 3.0.

Web 3.0 is not only a wildly different technological architecture, but also a completely different approach to solving complex problems.

It has been 50 years since the original Internet protocols were created. In that time, the industry has developed a new profound technology.

This technology takes the fundamental protocols and open specifications of Web 1.0... and combines it with the monetary incentives that rewarded the second generation of the Internet.

What is happening right now is a once-in-a-generation opportunity for savvy investors to get in at the ground floor of the next generation of the Internet.

It's not just about investing in the next Google, Amazon, Facebook, or Netflix – although that will certainly be possible.

It's about taking a stake in the protocols – the cornerstone technology – that will give rise to the next group of trillion-dollar technology giants.

There's no other way to put it.

The technology being built today will be used for the next two or three decades. Our opportunity to get in is now.

Blockchain technology projects are often decentralized, usually open, and almost always community-driven. They are very rarely controlled by single corporations. And even in cases where one entity is in charge, there are typically foundations that guide the project's technical direction and research-and-development spending.

In other words, Web 3.0 and blockchain technology aims to return to the Internet's original mission. They will deliver on the promise of a truly open, decentralized Internet. And they will wrest control away from the Googles and Facebooks of the world.

This sea change is just getting started.

If you're reading this now, I can tell you that we're still in the early stages of the development of blockchain technology. The basic infrastructure is still being built out.

As evidence, just 38.7 million digital wallets currently hold the most popular cryptocurrency asset, bitcoin. Furthermore, most users who hold cryptocurrencies have multiple wallets. So I would speculate that there are far fewer individuals actively participating in this market.

There are 7.9 billion people on the planet and more than 1 billion credit-card users... In short, we have a long way to go.

Imagine what it would be worth to invest in Microsoft's operating system in the '90s. These are the types of investments that produce generational wealth.

A handful of smart investments in Web 3.0 companies can give you a chance at these kinds of gains in the coming years. It's time to seize the opportunity.

Editor's note: For the first time in his career, Jeff has started pounding the table about cryptos... not based on speculation, but to invest for the longer term in the technology behind Web 3.0. What's ahead represents the launching pad for a new class of crypto assets that insiders say could be "more disruptive than bitcoin." If you'd like to learn more, don't miss his brand-new "Click for Crypto" interview... available for a short time right here.

"Even high-flying momentum stocks can come back down to Earth," Dave Lashmet writes. So when you're investing for the future, you need to get into a certain mindset, especially when it comes to tech companies... Read more here: How 'Proactive Investing' Can Help You Succeed in Tech.

"A handful of innovations are about to change our world in the same way the Internet did in the 1990s," Matt McCall says. But not every company will come out on top of this new tech revolution. That's why Matt compiled the most important traits the winning companies will have right here.

Today, we’re highlighting a company that has been a staple in the utilities sector…

Longtime readers know that utility stocks can be great investments over the long term. These companies supply our homes with water, gas, and electricity… And they normally hold monopolies in their markets, leading to consistent profits. Today’s company is a great example…

American States Water (AWR) is a $3 billion utility provider. Through its subsidiaries, it provides more than 1 million people in nine states with water, electricity, and more. It also holds 50-year privatization contracts with the federal government, providing 11 military bases around the country with water-management services. While it’s not an explosive tech giant, this necessary business pays off for investors… In the second quarter, the company approved a 9% increase for its dividend payment in September.

As you can see in today’s chart, AWR shares are rising again after a rocky 2020. They’re up 20% over the past year… And they recently hit a fresh 52-week high. This just goes to show that providing households with basic resources can lead to solid gains… 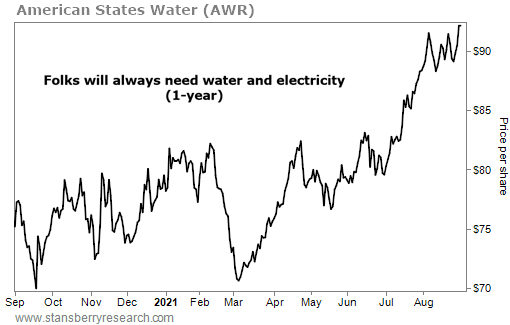