What (Not) to Do About the Yield Curve Today
By Ben Morris
Wednesday, April 6, 2022

And it's teetering on the edge right now.

The warning we're talking about is an interest-rate "inversion" – a rare situation in which short-term interest rates are higher than long-term rates.

Today, we'll explain why an interest-rate inversion matters, both for the economy and the stock market. We'll show you how past inversions have correlated with stock market crashes. And we'll discuss what the current situation means for us as traders and investors now.

The specific interest rates we're talking about today are on the two-year (short-term) and 10-year (long-term) U.S. Treasurys.

When you buy a Treasury, you're loaning money to the U.S. government. And normally, the government needs to pay you a higher interest rate to tie up your money for longer amounts of time.

This is the natural order of things because the risk of any loan increases with time... You might think you have a reasonably good idea of what will happen over the next year or two. But you don't have nearly as good of an idea of what the world will look like in 10 or 30 years...

You see, the Federal Reserve controls the shortest-term, "overnight" interest rates. This is the rate at which, in its role as the country's central bank, the Fed loans money to corporate banks like JPMorgan Chase (JPM) and Bank of America (BAC).

The further out into the future that Treasurys mature, though, the less control the Fed has. It affects the supply of and demand for long-term Treasurys by buying and selling them... But global players in the financial markets influence long-term Treasury prices (and yields) far more than they do with short-term Treasurys.

All the reasons why interest-rate inversions happen and what they mean for the economy are topics for another day (or, more likely, a book or two). What you need to know now is that they're not normal... and they tend to precede market drops.

The bottom section of the chart (in blue) shows the benchmark S&P 500 Index. As you can see, not long after the yield spread inverts, stocks drop... 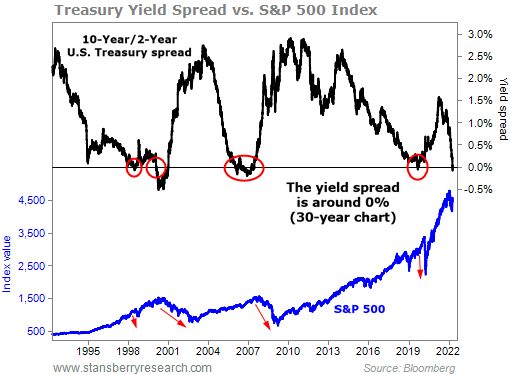 The last four times the yield spread between 10-year and two-year Treasurys crossed below 0%, stocks dropped an average of 40% soon after. And the spread just spent three days below that 0% level before rebounding back above it yesterday.

Here's the thing... "Soon after" doesn't mean "immediately after"...

With that in mind, we don't suggest you sell all your stocks right now.

Consider what happened in late 1994. The yield spread fell to as low as 0.07% on December 20 that year. That's only marginally higher than Friday's low of -0.08%. And boy, would that have been a bad time to get out of the stock market...

In other words, a wide range of possibilities still exists for the stock market... even though the two-year Treasury yield just dipped below the 10-year yield.

If the spread climbs higher from here, we may be in a situation like late 1994. Stocks could post huge gains over the coming years.

If the spread continues lower and holds below 0%, we should get more cautious. But it doesn't mean you'd need to sell immediately. You'd have a little time to reevaluate your approach...

In that scenario, you might slow down on bullish positions. You might tighten some of your stop losses. And you might look for trades that can benefit during down markets.

For now, though, it's too soon to make any dramatic changes based on this often-cited (near) warning signal.

The S&P 500 is still in a long-term uptrend. And for now, we're bullish. Our advice is to continue to hold your current bullish positions and look for new opportunities in stocks.

Editor's note: If you're worried after the volatile start to 2022, make sure you check out DailyWealth Trader. This daily service has one goal – to help you learn how to use low-risk trading strategies to generate A LOT more income... with the potential for market-beating returns. And it offers recommendations and insights for traders of any skill level... So it couldn't be easier to get started. Learn more details here.

"Many financial news articles today are dwelling on the worst-case scenarios," C. Scott Garliss writes. But when fear and uncertainty run rampant, it's important to remain calm – because that pessimism could mean big gains are on the way... Learn more here: What Low Expectations Mean for Stocks in 2022.

"Nothing else you can do this year is more likely to increase your portfolio's return," Porter Stansberry says. You can transform your portfolio into a winner... using two simple steps. It all comes down to knowing exactly how much risk you're taking... Read more here: The 'Best, Safest, and Surest' Way to Build Your Portfolio.

Today, we’re looking at one of the most recognizable chocolatiers in history…

Companies that sit at the top of their industries are great, simple ways to invest over time. Our founder Porter Stansberry has dubbed these “Global Elite” businesses. They have strong balance sheets, and their brands are known all over the world. Today’s company is a classic example of a Global Elite powerhouse…

Hershey (HSY) is a $45 billion candy behemoth. It’s known for popular brands such as Hershey’s brand-name chocolate, Kit Kat bars, and Reese’s peanut butter cups. Folks have stocked their kitchen pantries with these sweets for more than 125 years. And since this company is the best at selling a product people will always love, its success isn’t going anywhere… Hershey posted nearly $9 billion in net sales for full-year 2021, up 10% year over year.

As you can see in today’s chart, HSY shares are soaring. They’re up more than 60% over the past two years, including dividends… And they recently hit a fresh all-time high. As long as people keep coming back to this Global Elite chocolate maker, this uptrend should continue… 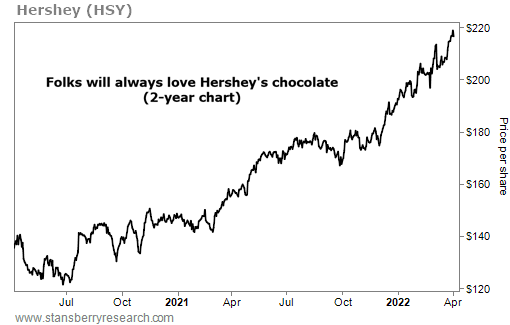