On Monday, March 16, the S&P 500 Index fell 12%. And while that kind of one-day drop might feel normal after the last few weeks, it's actually incredibly rare.

We are living through historic times. And the big question is... what happens next?

To answer that question, I studied every daily fall of 5% or more going back to 1950. It turns out these daily collapses tend to precede fantastic buying opportunities.

Now, it's important to note that the trend is obviously down. So I'm not recommending you go out and buy today. But history shows that if you have a long-term horizon, the opportunity in stocks is strong... And an 18% rally is possible in the S&P 500 over the next year.

I'm not talking about a 1% or 2% fall, though. Those may feel like big drops during normal times. But in the larger scope, they aren't as rare as you'd expect.

So to look at the truly extreme daily price falls, I examined every time the S&P 500 fell 5% or more in a day. This is a very rare occurrence...

Since 1950, it had only happened 23 times before this year. Surprisingly, we've seen four of these days happen in the past month. You can see the rapid fall in the S&P 500 below... 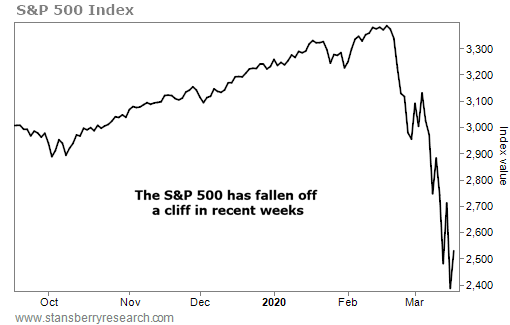 The drop-off has been fast... And we've seen several 5%-plus daily falls along the way. Those days are painful for all investors, but they aren't the long-term negative sign you might expect.

Buying after similar daily swings has been a good idea throughout history...

Since 1950, it has led to a winning trade over the next year 83% of the time. And it can lead to real outperformance along the way. Take a look...

The market has returned roughly 7% a year since 1950. But buying after huge down days leads to even better performance.

Similar cases have led to 5% gains in six months and an 18% gain over the next year. That crushes a typical buy-and-hold strategy. And it's a small but significant positive in today's hugely bearish market action.

Of course, the current trend is against us. Despite a few up days, the S&P 500 is still struggling through its worst rut since the financial crisis of 2008. And I don't recommend fighting that trend today. That's a foolish bet.

Still, today's rare volatility points to major outperformance in U.S. stocks when the uptrend returns. We're not there yet. But be ready... An opportunity is likely right around the corner.

History says that following the investment pros today is a terrible idea. While volatility still rules the market, investor fear could be a sign that big gains are on the way over the next year... Get the full story here: The Investment Pros Hit a Fear Extreme.

"It's dangerous to buy until the trend reverses," Chris writes. But with the current fear in the markets, when the trend does return, we could see outsized gains in the coming months... Read more here: Why Extreme Fear Could Be a Positive for U.S. Stocks.