Why Extreme Fear Could Be a Positive for U.S. Stocks
By Chris Igou
Monday, March 16, 2020

Trading came to a halt last Monday after a sudden drop in U.S. stocks. Then, it happened again on Thursday.

The sharp falls triggered the S&P 500's "trading curbs" to stop the bleeding. But the 15-minute lull did little to help on either day... Markets finished down more than 7% on Monday and nearly 10% down on Thursday.

With the health concerns and economic unknowns created by the coronavirus pandemic, it's an understatement to say investors are panicking... Fear is running through the veins of today's financial system.

In fact, the market's "fear gauge" recently hit its highest level since 2008. But that might not be the bad news you'd expect. History says similar times of extreme fear have tended to signal bottoms in the market.

So while the trend is clearly down today, a solid rally could be on the horizon once prices reverse. And based on history, we could see 27% upside in the S&P 500 once the trend returns.

The CBOE Volatility Index ("VIX") is the so-called "fear gauge" of the U.S. market. It measures implied volatility of the options markets.

Simply put, when markets get crazy, the VIX rises.

Today, we are seeing the highest VIX reading since 2008. Folks are more scared today than they were during either of the last two corrections. Take a look... 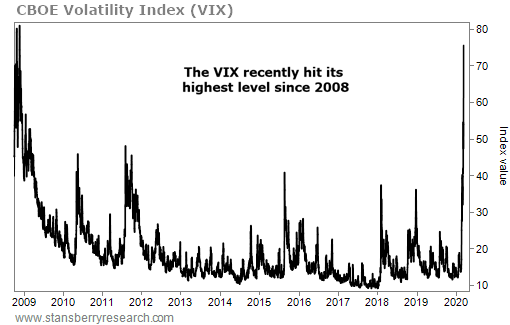 The VIX hit a level of 75 last Thursday. That's the highest reading we've seen in more than a decade. Folks are downright terrified of what's next in the market.

But here's the thing... Looking back at 20 years of data, this kind of fear has signaled fantastic buying opportunities. Check out the table below...

The S&P 500 has returned 3.6% a year since 2000 (not including dividends). That's a mediocre gain. But buying when fear is at new highs crushes those results...

Similar fear extremes have led to 11% gains in six months... and 27% gains over the next year. These are fantastic numbers. And it's impressive outperformance.

It's important to note that these levels are the second-highest ever. Only the financial crisis in late 2008 led to a higher VIX. And it's possible things could get worse from here.

Still, we know that these kinds of extreme fear occurrences create opportunities. It's dangerous to buy until the trend reverses... But when it does, stocks could be set for a major move higher.

For now, you need to follow your stops and continue to fight another day. That way, when the time is right, you'll be ready to act.

P.S. If you're worried about the markets, the experts at Stansberry Research are here for you. And they're holding a roundtable discussion this afternoon to share their thoughts on the volatile market action we've seen in recent weeks. Simply click here to join this afternoon briefing. (And if you miss it, paid-up subscribers can find a recording of the event in this evening's Stansberry Digest.)

It's dangerous to try to "catch a falling knife." For a low-risk way to enter new positions as they move in your favor, check out Ben Morris and Drew McConnell's recent essay: The Pro's Strategy for Increasing Profits and Reducing Risk.

"Nothing keeps an investor's options open like holding cash," Dan Ferris writes. When the uptrend returns, you'll need some "dry powder" on hand if you're going to take advantage of beaten-down opportunities... Learn more here.