What to Buy as U.S. Inflation Falls
By Chris Igou
Thursday, December 15, 2022

Editor's note: Our offices will be closed this Friday, so we'll be back after a short break. Please look for your next issue of DailyWealth on Monday, after the Weekend Edition.

Even the head of the world's most powerful economic institution had to admit it...

"I think we now understand better how little we understand about inflation," Jerome Powell said earlier this year.

Powell is the Federal Reserve chair. He's the one in charge of reining in U.S. inflation. But by his own admission, it's a beast that even he doesn't fully understand.

Still, he acted in a big way this year to stop it...

Powell unleashed a rate-hike campaign like nothing we've seen in decades. He took the federal-funds rate from 0.25% in March to 4% in November... one of the fastest hikes on record.

The stock market didn't know if this strategy would work. Investors only knew that the world was changing. They ran for the exits... And stocks plummeted 22% from the end of March through mid-October.

But now, we're seeing clear signs that the worst is behind us. The rate of inflation fell more than expected in November to 7.1%... well below the 9.1% peak we saw this summer.

That's great news for U.S. investors... But as I'll share today, it's even better news if you're thinking about putting money to work outside the U.S.

Powell's actions have been painful. But it looks like his plan to prevent runaway inflation has succeeded.

That worst-case scenario has likely come off the table. And with it, markets have gained more certainty.

The S&P 500 Index is now up more than 13% after bottoming in October. That's great to see. But Powell's success isn't just good news for the U.S...

It also sends a message to the rest of the world – places where the inflation boogeyman isn't as obviously defeated – on how the next few months could play out.

The world now knows that higher rates will work. Other countries will likely use the same playbook to get their own inflation under control. And global sentiment can turn around.

In the meantime, with inflation sorted out in the U.S., Powell can slow down with the aggressive rate hikes... And that means the incredible surge we've seen in the U.S. dollar could be over.

That's a big reason why those markets have been falling deeper and longer than the U.S.

In each case, the fall was much larger than the 25% drawdown we've seen in the U.S. from its January peak to its recent low. And after such extreme declines, a strong rebound was likely... once conditions started to turn around.

That rally is underway now.

The dollar is already down in recent months. And sure enough, all of these markets bottomed in September and October... right as the U.S. Dollar Index ("DXY") started to fall. Take a look... 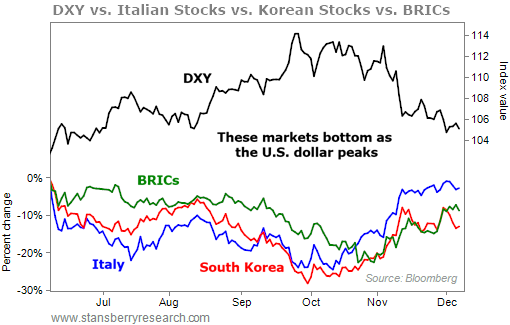 These markets stopped crashing as soon as the dollar fell from its peak. And its recent drawdown has helped drive them higher.

If the dollar is entering a new downtrend, this is just the start of a bigger bull run in foreign stocks.

Most investors wouldn't expect stocks outside the U.S. to be the smarter bet as U.S. inflation falls. But given their larger declines, their short-term upside is higher.

It's all thanks to a declining U.S. dollar. And assuming that continues, foreign stocks are a smart place to buy right now.

"With inflation continuing to slide, it's time for fearful investors to pay attention," C. Scott Garliss says. The Fed's plan is working. And if it puts rate hikes on pause, stocks could begin to soar... Read more here: A Two-Year Stock Boom Is About to Begin.

"If you're a long-term investor, the money you put to work in the months to come will likely go toward some of the best buys of your life," Chris writes. History shows that dark times can set up incredible booms. We've seen it in markets all over the world... Learn more here.