What WeWork's Failed IPO Means for the Melt Up
By Vic Lederman
Tuesday, September 24, 2019

Just last week, WeWork's much-hyped IPO fell apart before it even hit the runway. And I have to admit, it made me happy.

I'm guessing you know the story by now. WeWork was supposed to be a revolutionary tech company. And the revolution it was bringing to the world was... shared office space.

Yeah, about that. It turns out using debt to buy buildings and writing lots of short-term leases on them isn't revolutionary. It's dangerous.

The collapse of the IPO is a major victory for mom-and-pop investors. But not everyone took the opportunity to celebrate.

In fact, some have used it to spread fear. Take a look at this article from a few days ago...

This is just one example of many. And they all share a similar message. The thinking goes like this...

"If a hyped IPO like WeWork's can't make it through... then there's no demand for IPOs. And the bull market is over."

This is more than just wrong – the opposite is true. The collapse of the WeWork IPO is actually proof that the Melt Up has more room to run.

WeWork was about to launch its dubious IPO this month. But investors could smell the stink on it. They didn't bite... So the company postponed the offering. And there's no guarantee it will happen before the end of the year.

This tells us a lot about the sentiment of mom-and-pop investors. Right now, they're skeptical. Or maybe nervous and fearful.

Regardless of the word you pick, they're not euphoric. There's no question about that.

When mom-and-pop investors are euphoric, they'll buy anything. Just think back to the dot-com boom. Investors grabbed up anything that sounded like a hot Internet stock, even if it was junk... like the infamous Pets.com, which liquidated less than a year after its IPO.

The dot-com era felt like a gold rush. But then again, so does every Melt Up.

And that's the key point here. Bull markets don't sputter out with a sigh. They charge upward. They blaze past expectations.

A bull market nearing its peak is a time of euphoria. And that's just not where we are today.

Bubbles expand and stretch more than you could ever imagine – right before they pop. It's in their nature. Regular readers of DailyWealth know that this a key part of my colleague Steve Sjuggerud's Melt Up thesis.

So, the media is saying that investors acting defensively is a bad omen. But we know that bull markets have historically ended in euphoria.

Tech publisher Gizmodo described it best in this headline from last week. Check it out...

Right now, Mom and Pop are worried about getting burned by a bad deal. And that's not euphoria.

When the end is near, you'll know. Everyone around you will be talking about getting rich. And they'll be pouring money into investments that seem too good to be true.

There won't be any suspicion. That feeling simply melts away in the final stages of the Melt Up. Investors are more focused on getting in while they can.

So remember, bull markets end with euphoria. But today, investors are skeptical. Simply put, the Melt Up isn't over yet.

Don't pull out of the market just because a half-baked pseudo-tech company failed to get its IPO off the ground. Take it for what it is... a sign that investors still have their wits about them.

"This is a crazy situation – one that shouldn't happen," Steve says. "But here we are." A recent market anomaly points to more upside ahead for stocks... Get the details right here.

"This is not what we'd expect to see at the end of a major bull market," Steve writes. "We should see euphoria – investors throwing caution to the wind, taking big (and even foolish) risks." Investors are scared today... but you shouldn't be one of them. Read more here.

Today, we’re looking at a “picks and shovels” company in the booming data industry…

Investing in “picks and shovels” companies can be a low-risk way to bet on broad sectors. These companies provide the tools and services that support long-term trends – not just a single player in the field. Today, we’re looking at a company supporting data storage’s move to the cloud…

Equinix (EQIX) is a $49 billion data-center real estate investment trust (“REIT”). It rents out data storage to companies that can’t store it themselves. And it boasts technology giants like Amazon (AMZN), Microsoft (MSFT), and Salesforce (CRM) as its customers. This company shows data is only getting more central to our lives… In the most recent quarter, Equinix reported sales of $1.4 billion, up 10% from the same quarter last year.

As you can see in today’s chart, EQIX shares have soared. The stock has more than doubled over the past five years. And it recently hit a fresh all-time high. As long as companies need somewhere to store their data, this stock should continue higher… 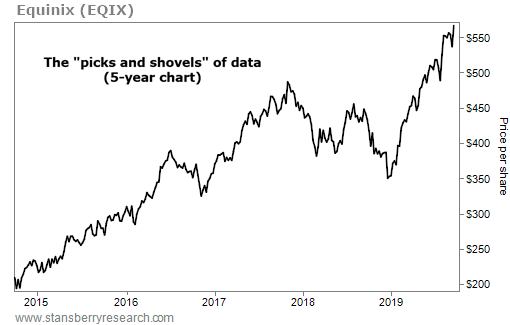