When Market Fads Take Over, Stick to This Investment Mantra
By Dan Ferris
Friday, February 26, 2021

Most of the New York Times headlines in the days leading up to the market's top were about the presidential primary elections. In those first several issues of March 2000, headlines about stocks or investing didn't appear until I was several pages in (sometimes 40 or 50!).

But on the day the market peaked, right in the middle of the first page and just below the fold, the Times ran a story titled, "Teaching Johnny Values Where Money Is King." The first sentence read...

Every day after school, 13-year-old Jeffrey Mendelman has a peanut butter and jelly sandwich with milk, finishes his homework – and checks his stocks.

A 13-year-old boy obsessively checking stock prices is as sure of a sign of the top as you can get.

The 2021 version of the "Teaching Johnny" story is, of course, much weirder...

Carole Baskin runs Big Cat Rescue, a tiger sanctuary in Florida. And as many of you probably know, she also stars in the Netflix true crime documentary, Tiger King... It's about her long-running feud with Joe Exotic, who operated a wild animal park in Oklahoma.

As gonzo journalist Hunter S. Thompson said in his 1971 book, Fear and Loathing in Las Vegas, "When the going gets weird, the weird turn pro."

It appears Baskin was paid about $300 to make a video mentioning a penny stock called Zomedica (ZOM). Baskin notes that she doesn't hold any of the shares of the pet-medicine maker. But in the video, she said she can feel it in her "cat bones" that it's a good one...

Another weird celebrity stock promotion implies the bubble is in its death throes...

In a two-word Twitter post around 8 a.m. Eastern time on January 7, Tesla founder Elon Musk simply said, "Use Signal." He was referring to the cross-platform messaging app.

But a bunch of investors didn't care to confirm that detail before hitting the buy button...

Texas-based Signal Advance (SIGL) surged 5,000%-plus in three trading sessions after Musk's message. Unfortunately, that company has nothing to do with the Signal app.

The company has no revenue and hasn't filed a U.S. Securities and Exchange Commission report since 2019. Its stock went up 5,000% solely because it had "Signal" in its name.

When the market gets to the "We'll buy anything with the latest investor fad in its name" phase of the bubble, surely the end must be near.

To put it bluntly... I have never seen a moment this extremely bullish during my 22-year career... in my 59 years of life... or even since Adam and Eve were kicked out of paradise.

Even though regular readers know that I abhor predictions, I'll go one step closer to making an outright one today... I will be shocked if the benchmark S&P 500 Index doesn't spend at least some time trading 15% to 20% below its all-time high this year.

And one more step closer... I've bet a small amount of real money that it will happen.

Of course, I could be making a mistake by placing such a bet. It's challenging to try to trade around the top of a major asset bubble, in either direction. The action tends to be too crazy and choppy.

So what should you do about all this today?

It's critical to remember my investment mantra: Prepare, don't predict...

I still believe "true diversification" – which prepares you for a wide range of long-term outcomes – is the most prudent path right now.

As I've said before, the basic components of a truly diversified portfolio include a foundation of stocks and bonds, plenty of cash, gold, silver, and at least a little bit of bitcoin.

I also recommend that you explore stores of value in which you have a deep personal interest... They can be anything from real estate to gold coins to collectible musical instruments to wine or art. It's basically anything in which you have real knowledge and a personal connection, giving you greater insight into the asset's potential to preserve wealth.

You can't let yourself get caught off guard. You must be ready for a wide range of potential outcomes. In the end, I guarantee you'll be glad that you prepared.

Editor's note: Dan's No. 1 stock idea today could soar during the Melt Up – and will likely do even better when the market breaks down. All told, it could be a 10-bagger over the long term. And it can even help you capture the upside of both gold and cryptos in the coming years... without going near any speculative assets. To learn why this investment ticks all the boxes, click here.

"The pendulum of investor psychology has swung to the other extreme," Dan says. Big growth stocks are leading the market mania today. Folks are expecting that the future will be exactly like that past decade. But we can't expect this to last forever... Get the full story here: The 'Price of Prosperity': When Great Businesses Fail.

"The more expensive stocks become, the riskier they are to own," Dan writes. Right now, stocks are more expensive than any other time in the past 100 years. So with risk at sky-high levels today, it's time to plan accordingly... Read more here: This Is the Riskiest Stock Market of the Past 100 Years.

Today, we’re checking back in on a company that’s helping farmers feed the population…

While many industries are still facing hardships from the pandemic, one thing hasn’t changed… Folks always need to eat. That means that no matter what happens, we’ll always need farmers. Today’s company supplies the machinery that gets food out of the ground and onto your table…

Deere (DE) is a $110 billion maker of farm equipment and construction machinery. It makes everything from tractors and combines to excavators and lawn mowers. And business is booming… Deere recently said its first-quarter net income more than doubled year over year, soaring from $517 million to $1.2 billion. The company also raised its dividend by 18% to $0.90 per share and increased its full-year earnings forecast.

DE shares have taken off since last year’s sell-off. They’re up 380% including dividends over the past five years, and they’ve exploded to new all-time highs. As long as people need to eat, this trend should keep going… 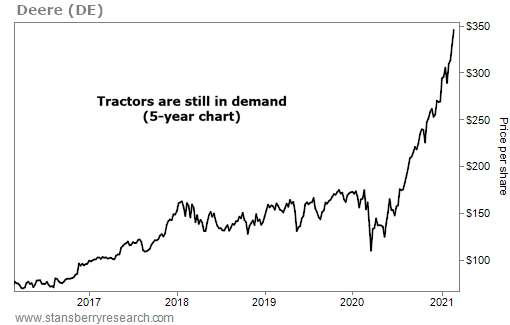