When journalist Oliver J. Gingold coined the "blue chip" label for stocks, he was talking about the soaring share prices of the 1920s...

In poker establishments, blue chips tend to have the highest value. Gingold wanted to write about the stocks that were rising far above the rest.

The name stuck. The businesses we call "blue chips" today aren't just winners, though... They're reliable. Blue-chip companies are the ones that are supposed to keep your investment dollars safe – even in scary times.

Last month, that reputation was tarnished for two major blue-chip retailers. As a result, many investors walked away from the table.

History shows that's exactly the wrong move, though... because these giants could have double-digit upside from here.

The stock had been in a steady uptrend since 2016. The big-box retailer had a fortress balance sheet and a terrific underlying business... everything you'd expect from a blue-chip company.

But on May 17, the retail behemoth missed earnings expectations. It reduced its forecast... And its stock crashed. Take a look... 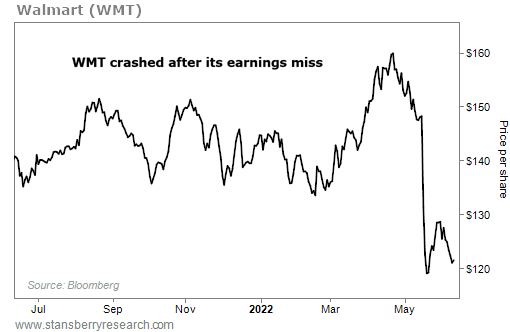 Shares fell 11% in a single day. Blood was in the water. And Target (TGT) was next in the dunk tank...

Target reported earnings the following day. It missed projections, just like its competitor. And it, too, suffered a brutal sell-off... 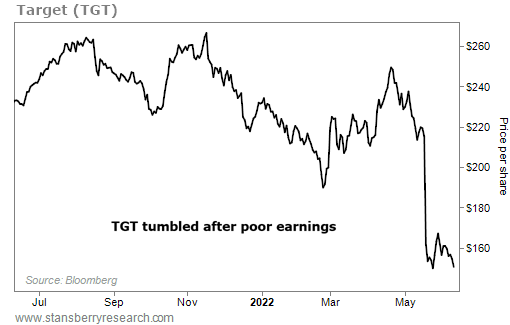 After its earnings miss, Target suffered a single-day loss of nearly 25%.

These were the worst single days for each company since the Black Monday crash of 1987. Again, these are true blue-chip retailers... They're textbook examples of low volatility. So these quick drawdowns are historic.

Still, while shares of Walmart and Target rarely fall this far – they aren't invincible. Both stocks have staged numerous one-day drawdowns of 8% or more in the past few decades.

What we care about is what happens after these falls. Let's start with Walmart...

Walmart's stock has fallen 8% or more 15 times, including 1987. Here's what would happen if you only bought after these falls, compared with a buy-and-hold strategy...

As you might expect, Walmart has a fantastic long-term track record. This blue-chip stock typically returns about 4% in a three-month period, 9% in a six-month period, and 18% in a year.

But buying after a crazy one-day fall can juice those returns...

On average, you'd have ended up with 10% gains in three months and 12% in six months. In a 12-month period, the stock performed about on par with buy-and-hold at a 16% return.

Now let's look at Target. These results are even more dramatic...

But buying after the drawdowns led to massive outperformance...

According to history, in a typical three-month period, you'd have returned 6%. That jumped to 25% in six months... and soared to a staggering 46% in an average year following a big dip.

Now, the trend is still down for both stocks today. But as certified blue chips, it's unlikely they'll stay down for long. And according to history, these big drawdowns can be a terrific buying opportunity.

If the past is any indication – now might be a good time to bet on blue.

"Stocks are in freefall," Brett Eversole writes. Even blue-chip stocks are feeling the pain of today's uncertain market. But history tells us if we stay patient and ride this out, we could earn massive returns in the long term... Learn more here: This Stock Market Decline Has a Silver Lining.

As we've seen with the recent massive sell-off, stocks are hated right now. But if we focus on surviving, we'll be in position to profit once the bleeding stops... Read more here: Two Positives of a Painful Market.