Why Inflation Should Continue to Ease This Month
By C. Scott Garliss
Tuesday, December 6, 2022

This year has been full of worrying news for investors. But the king of market movers in 2022 has been inflation...

Inflation is the root of most investor problems this year. It has created massive economic uncertainty... And it's why the Fed has spiked interest rates higher. Both of those factors hammered stock and bond prices.

So each month, everyone's watching for the new inflation numbers. That news moves the markets.

While those reports have mostly been bad news, inflation has come down recently. And as I'll share today, inflation growth should slow further from here.

Energy prices have played a major role in soaring inflation.

In June 2022, the overall inflation rate rose 9.1%. However, energy prices account for about 9% of the benchmark for U.S. inflation, the Consumer Price Index ("CPI"). 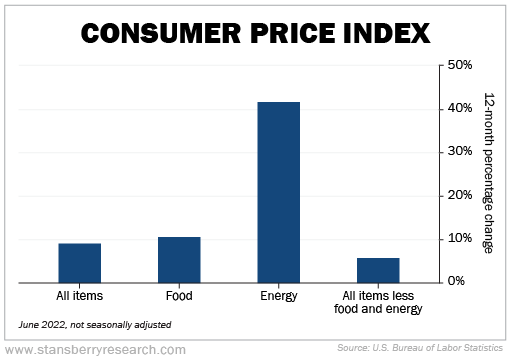 And given the outsized jump in gas prices specifically, that's the area that will tell us when to expect a turnaround in the inflation trend. 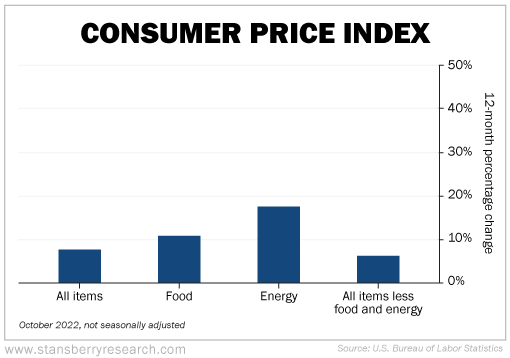 We can see that energy prices are still high. But the growth is nowhere close to what we saw this past summer.

In fact, gasoline prices have been in a steady downtrend since June. And the price at the pump continues to drop. That's according to data from AAA...

Gas is an easy metric to follow because we see prices daily. In October, the national average price for a gallon of regular unleaded gasoline was $3.76 compared with $3.40 a year ago. That's an increase of 10.6% YOY... down dramatically from the 40%-plus readings we saw earlier this year.

The nationwide average in November fell to $3.70. And like October, that compares with $3.40 per gallon from a year ago. So we'll likely see around 10% growth in November inflation when the latest numbers come out.

Take a look at the CPI compared with gasoline prices. You can see the two metrics move closely together. When gas prices peaked in June, the CPI hit a near-term peak soon after... 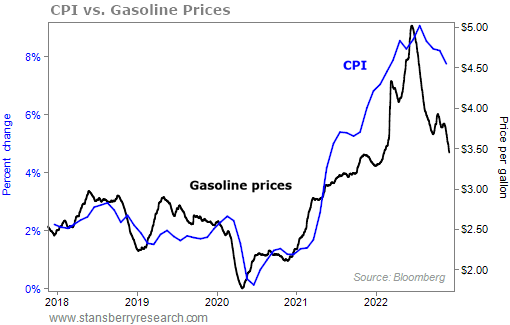 Again, unlike inflation, gas-price data is updated in real time. And based on the up-to-date numbers from AAA, there has been a sharp and steady pullback in fuel costs.

The November numbers will come out on December 13. In October, the pace of growth slowed to 7.7% YOY, the lowest level since January. And with energy prices falling today, inflation growth should cool down further when the new numbers are released.

Anything below last month's level should make investors happy... And if this trend continues, it could change inflation news from a bearish market mover to a bullish one.

At least for this month, we'll likely see a bullish surprise.

Expectations are important to the markets. And right now, everyone expects the worst. One key measure shows that folks are betting against stocks in droves. But this could be another sign that a turnaround is on the way... Read more here: The Bearish Bet Is Getting Crowded.

Bombshell headlines get a lot of attention – especially when they come with big moves in stocks. But the real forces that drive the markets are usually less flashy. We saw this recently in the thick of the Twitter debacle... Learn more here: It Takes More Than a Troll to Move the Market.